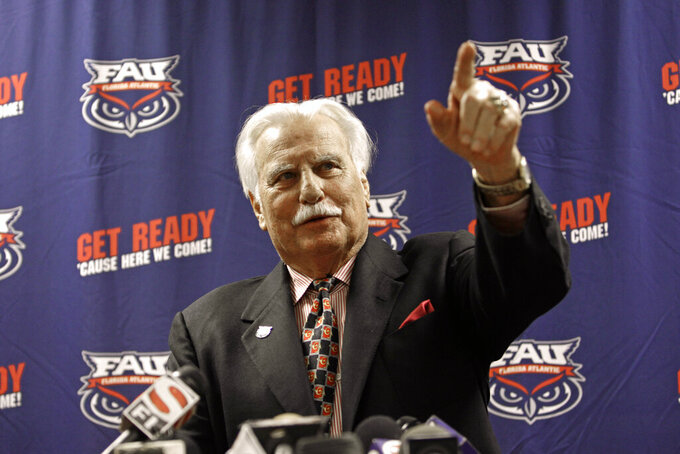 In this Aug. 11, 2011 photo, Howard Schnellenberger speaks during his announcement that he will retire from coaching after the 2011 season with Florida Atlantic University during a news conference in Boca Raton, Fla. Schnellenberger, who coached Miami to the 1983 national championship and built programs at Louisville and Florida Atlantic, died Saturday, March 27, 2021 at the age of 87, Florida Atlantic announced. (AP Photo/J Pat Carter)

MIAMI (AP) — Howard Schnellenberger was a pipe smoker with a push-broom mustache and gruff baritone, and he paired his grandiloquent manner with grandiose visions for football at Miami, Louisville and Florida Atlantic that caused snickers.

At all three schools, Schnellenberger disproved doubters. He revived the sport at Miami and Louisville and started the program at Florida Atlantic during a coaching career that spanned a half century.

Schnellenberger died Saturday at 87 in Boca Raton, Florida. FAU announced his death and said he recently had been in a care center.

Schnellenberger had a career record below .500, but when it came to building, he was a winner. His legacy includes on-campus stadiums at Louisville and Florida Atlantic.

He led the Miami Hurricanes to the first of their five national championships in 1983, and coached Louisville to a Fiesta Bowl win over Alabama to cap the 1990 season. He then founded the program at Florida Atlantic and retired as coach after 11 seasons highlighted by back-to-back bowl victories.

Everywhere Schnellenberger coached, he envisioned a winning team as a unifying force, the way it was with the ’83 Hurricanes.

“I think it all goes back to the day they had a parade in Miami for the national championship team,” he once said. “I saw the people on the sidelines — black families, Cuban families, Hispanics and Anglo families — all there, 100,000 strong, celebrating their ball team and community. That football team was able to do something the federal government, city and county tried to do and couldn’t: bring the community together.”

Schnellenberger’s career bowl record was 6-0, and he experienced perfection in the NFL, too. He was the offensive coordinator under Don Shula for the Miami Dolphins in 1972, when they won the Super Bowl to finish 17-0 for the NFL’s only undefeated, untied season.

He would wear a championship ring on each hand, one for the Dolphins and the other for the ’83 Hurricanes. That University of Miami team finished No. 1 thanks to a 31-30 upset victory over Nebraska in the Orange Bowl, a game still considered among the greatest in college football history.

“The thing I remember most about that game was the way South Florida rallied behind our team,” Schnellenberger said a decade later. “In the Orange Bowl that night was a charge of electricity I had never felt there. The hair on the back of my neck stood up because of the energy from the crowd.”

That was the peripatetic Schnellenberger’s final game with the Hurricanes. He left to coach Miami’s franchise in the United States Football League, but the team quickly folded before playing a game.

“I don’t regret the decision I made,” he said. “I have the full realization it was kind of dumb, but I’ve made a lot of dumb decisions in my personal life.”

Schnellenberger was born March 16, 1934, in Saint Meinrad, Indiana, and played for “Bear” Bryant and Blanton Collier at Kentucky. He began his coaching career as an assistant at Kentucky in 1959. As an assistant for Bryant in 1961-65, he recruited Joe Namath and helped Alabama win three national titles.

At Miami, Schnellenberger took over in 1979 amid debate about whether the moribund program should fold. Attendance began to improve when the Hurricanes went 9-3 and won the Peach Bowl in his second season.

Thus began more than a decade of dominance as the Hurricanes quickly became a feeder school for the NFL. Schnellenberger’s quarterbacks included Jim Kelly and Bernie Kosar, who went on to star in the pros, and Mark Richt, who later became the Hurricanes’ coach.

"He was an offensive genius, but also a man of integrity,” Richt tweeted Saturday.

Schnellenberger undertook another rebuilding project when he went to Louisville in 1985, inheriting a program that had endured six consecutive losing seasons. He said the Cardinals would return to the Top 25, and mapped out plans for a new stadium, conference membership and renewal of the series with Kentucky — all of which happened.

“He was one of the giants in college football,” Louisville coach Scott Satterfield said in a statement, “and his impact on the sport in the state of Kentucky is immeasurable.”

In 1990 the Cardinals went 10-1-1 and won the Fiesta Bowl, and they won the Liberty Bowl three seasons later. But in 1995 Schnellenberger left to coach Oklahoma, and the move was a disaster.

Besieged by rumors regarding his drinking and treatment of players, he bitterly resigned under pressure after going 5-5-1 in his lone season there. When asked if the experience at Oklahoma soured him on football, Schnellenberger replied: “It soured me on Oklahoma only.”

He returned to South Florida and worked as a municipal bond broker until he was hired by Florida Atlantic to build a program from scratch. He hired himself as coach, and the Owls played their first game in 2001.

“This is the most important thing I’ve ever undertaken,” he said. “We’re on a collision course with a national championship, and time is the only variable.”

It hasn’t happened yet, but Schnellenberger led the Owls to two bowl wins and oversaw the opening of their stadium in 2011. He retired following that season.

Survivors include Beverlee, his wife of 61 years. A private memorial Mass will be held.