Humphrey out for the season as Ravens reel from close loss 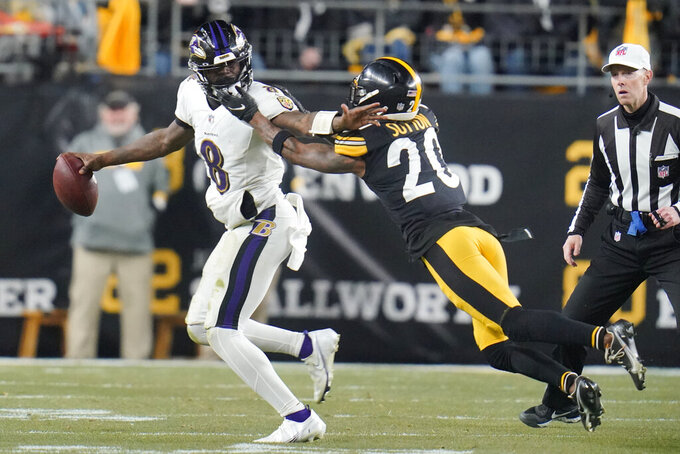 OWINGS MILLS, Md. (AP) — The Baltimore Ravens came within inches of creating some much-needed breathing room in the AFC North.

Instead, they fell short in an agonizing loss to a division rival — and now coach John Harbaugh's team has yet another major injury concern.

Harbaugh announced Monday that cornerback Marlon Humphrey is out for the season with a torn pectoral muscle. That news came following the team's 20-19 loss at Pittsburgh on Sunday that left the Ravens just a game ahead of Cincinnati atop the division.

Baltimore (8-4) is only two games ahead of last-place Cleveland and faces a tough schedule down the stretch. The Ravens have won plenty of close games this year, so they shouldn't feel too aggrieved after this one went the other way, but with the standings so tight and injuries still looming large, Sunday's defeat sets Baltimore up for a potentially stressful finish to the regular season.

“As Al Pacino said it ... an inch here or an inch there, or a second too early, a second too late, it is exactly right,” Harbaugh said, referencing a scene from the movie “Any Given Sunday" while talking to reporters Monday. “That is like a classic truth, about football and as a metaphor for life.”

Harbaugh boldly decided to go for a 2-point conversion with 12 seconds left against the Steelers, and Lamar Jackson's pass to Mark Andrews fell incomplete. Baltimore is now 6-2 in games decided by six points or fewer.

Game management. With two minutes remaining and Pittsburgh facing second-and-2 at the Baltimore 13, Chuck Clark of the Ravens was called for going offside. It looked as if that pre-snap penalty might have been on purpose, and if so, that was a clever way for Baltimore — which still had three timeouts — to prevent the Steelers from running the clock way down and kicking a go-ahead field goal.

Harbaugh was coy Monday about whether it was an intentional offside.

After falling behind by seven when Pittsburgh scored a touchdown with 1:48 left, the Ravens pulled off an impressive TD drive of their own, and whatever one thinks of the decision to go for 2, the play call resulted in a pretty open receiver. Jackson's pass was a bit long, and Andrews may have been a bit casual reaching out with one arm for it.

Baltimore's passing game as a whole is slipping, even though the Ravens finally have receivers Marquise Brown and Sammy Watkins healthy at the same time.

Over his past four games, Jackson is averaging just 6.0 yards per attempt, with six touchdown passes and eight interceptions. Jackson's ability to keep plays going makes him a threat as both a runner and a passer, but he took seven sacks Sunday — a sign that the line isn't protecting well enough or he isn't releasing the ball quickly enough.

“T.J. Watt, he’s a great defender, great rusher. He was doing his thing out there,” Jackson said after the game. “We’ve just got to get in the lab and find ways to make things happen."

Devonta Freeman had 97 total yards rushing and receiving, his most of the season. He also scored Baltimore's first touchdown on a 3-yard run.

Baltimore's defense held the Steelers to three points through three quarters — then allowed 17 in the fourth. Even though the Ravens finished with a big advantage in time of possession, the defense seemed to wilt against Pittsburgh's running game, and the injury to Humphrey leaves the secondary with another major problem.

In addition to Humphrey's injury, OL Patrick Mekari left in the second half with a hand injury and did not return.

36-23-1. That's the composite record of the last five teams on Baltimore's schedule. None of them are currently under .500.

The Ravens play at Cleveland next weekend. It's the second meeting between the teams in three weeks, and the Browns had their open date in between. Baltimore won the first matchup 16-10.