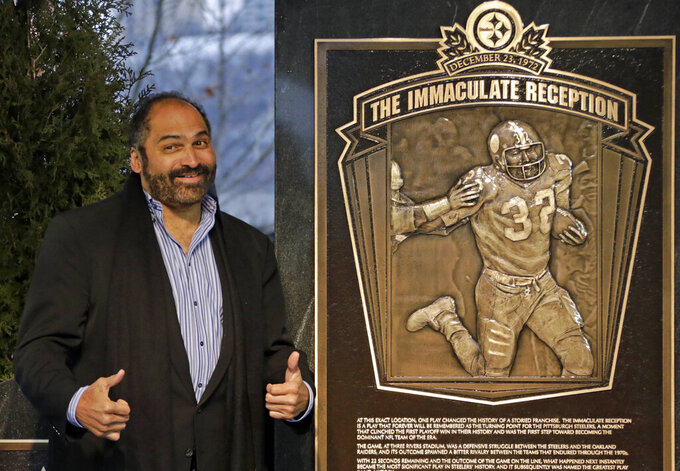 FILE - In this Dec. 22, 2012, file photo, former Pittsburgh Steelers Hall of Fame running back Franco Harris stands on the spot of the "Immaculate Reception" after a marker commemorating the 40th anniversary of the play was unveiled where Three Rivers Stadium once stood on the North Side of Pittsburgh. Harris’ scoop of a deflected pass and subsequent run for the winning touchdown in a 1972 playoff victory against Oakland _ has been voted the greatest play in NFL history. A nationwide panel of 68 media members chose the Immaculate Reception as the top play with 3,270 points and 39 first-place votes. (AP Photo/Gene J. Puskar, File)

Pittsburgh running back Franco Harris' scoop of a deflected pass and subsequent run for the winning touchdown in a 1972 playoff victory against Oakland — forever known as the "Immaculate Reception" — has been voted the greatest play in NFL history.

A nationwide panel of 68 media members chose the Immaculate Reception as the top play with 3,270 points and 39 first-place votes. Second in the balloting was Dwight Clark's TD catch from Joe Montana that lifted San Francisco past Dallas to win the 1981 NFC championship.

Harris' spectacular play not only lifted the Steelers to their first-ever playoff victory, it was the catalyst for the Steel Curtain dynasty that would win four Super Bowls from the 1974 through the 1979 seasons.

"That play really represents our teams of the '70s," Harris said.

With 22 seconds remaining in the first-round matchup, and the ball at the Steelers 40-yard line, quarterback Terry Bradshaw scrambled under heavy pressure on fourth down. He heaved the ball downfield toward running back Frenchy Fuqua, and Raiders safety Jack "The Assassin" Tatum arrived at the same time. The ball ricocheted wildly toward Harris near the left sideline. Before it hit the turf, he bent deeply and grabbed it before heading to the end zone.

Game officials weren't sure who deflected the pass; had it gone off Fuqua, rules of the day would make it an incompletion. Referee Fred Swearingen, after consulting with NFL supervisor of officials Art McNally, ruled a touchdown. Pittsburgh kicked the extra point for a 13-7 lead with 5 seconds remaining and won a playoff game for the first time in franchise history.

"There are moments in life where you know what you're doing," Harris said. "Me and Frenchy, we had no idea what we were doing."

Neither did Steelers owner Art Rooney. Known as "Chief," Rooney had abandoned his seat and took the elevator to the locker room to be with his team after another postseason defeat. Chief didn't see the greatest play in franchise (and league) history pulled off.

His son, Dan, who would take over administration of the team — and created the Rooney Rule for diversity in NFL job interviews — stayed upstairs and witnessed the drama as Swearingen and McNally spoke on the phone. After Swearingen raised both arms to signal touchdown, and the Raiders could do nothing with the ensuing kickoff, Rooney at last felt relief.

"After that, I loafed around the press box. After a while, I went out and down to the dressing room. Everybody was on Cloud 9, cheering each other, all excited," he told the Pittsburgh Post-Gazette in 2012. "It may have been the most exciting game I had seen up until that time."

Clearly, the voting panel found the Immaculate Reception as a runaway for best play as part of the NFL's celebration of its 100th season. Montana to Clark, known as "The Catch," received 3,099 points but only four first-place selections. The runner-up in first-place votes was David Tyree's "Helmet Catch" for the Giants as they rallied to beat the Patriots in the 2008 Super Bowl.

Harris' catch eventually led to a rules change, too, with offensive players consecutively touching a pass being permitted. That eased officiating decisions on deflected balls, of course.

But it didn't ease the angst felt by Tatum or his coach, John Madden — like Harris and Bradshaw, a Pro Football Hall of Famer.