Injuries force key receivers to be inactive for Jets, Colts 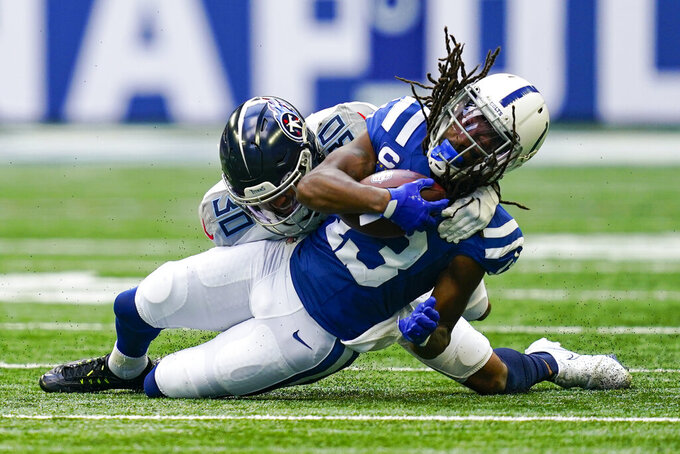 Indianapolis Colts wide receiver T.Y. Hilton (13) is tackled by Tennessee Titans cornerback Greg Mabin (30) after a catch in the first half of an NFL football game in Indianapolis, Sunday, Oct. 31, 2021. (AP Photo/Darron Cummings)

INDIANAPOLIS (AP) — The Indianapolis Colts and New York Jets will both be missing key receivers for Thursday night's game.

Indy deactivated four-time Pro Bowler T.Y. Hilton after entering the concussion protocol. He was injured when his head bounced hard off the ground late in Sunday's loss to Tennessee.

The Jets will be without Corey Davis, who had been listed as doubtful with a hip injury. It's the second straight game Davis has missed.

New York also will be missing starting quarterback Zach Wilson (knee) for the second straight. Mike White, Wilson's replacement, will be backed up by Josh Johnson after the recently acquired Joe Flacco was put on the inactive list.

Running back Tevin Coleman will miss his third straight game with a hamstring injury.

Starting left tackle George Fant will play for the Jets despite having an ankle injury.