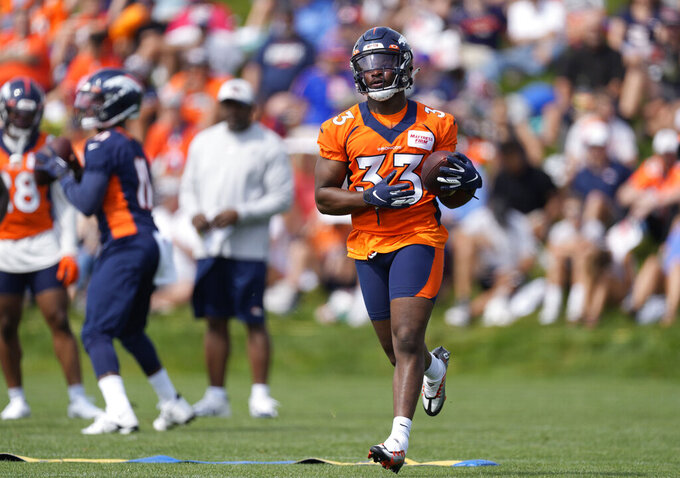 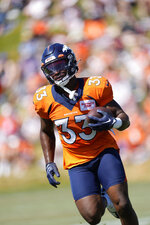 ENGLEWOOD, Colo. (AP) — Broncos running back Javonte Williams is using his downtime as he recovers from an injured right knee to feed his other passion: helping foster kids.

“I just really want to make sure that all the kids have the same kind of life experiences and things that I did growing up,” said Williams, who is launching his namesake charitable foundation next month, one that aims to provide bedroom makeovers and Christmas presents for children in foster care.

Williams has a 2-year-old adopted sister Ryleigh who went through the foster care system, “so I'm a foster brother," Williams said.

His parents, Jermaine and Shekemia Williams, took in Ryleigh at 4 weeks because her birth parents were both drug addicts and the couple adopted her three months later, Williams said.

This followed their attempt to adopt a boy through the foster care system, one that fell through after months of hope.

Launching his foundation has been theraputic for Williams, who got hurt in Week 5 at Las Vegas.

“When I help people, I feel better,” Williams told The Associated Press in his first interview since sustaining a serious knee injury Oct. 2.

Williams was among the hottest names in fantasy football heading into his second NFL season after a brilliant rookie year in which he scored seven touchdowns and was among the league's best backs at breaking tackles.

In Week 4, however, the 2021 second-round pick out of North Carolina took a toss from Russell Wilson and was dropped for a 1-yard loss by Raiders defensvie end Maxx Crosby, who jumped on his back just as Williams planted his right leg.

Williams' knee buckled under the weight of Crosby's 6-foot-5, 256-pound frame, tearing his ACL, LCL and posterolateral corner, a complex area of tendons and ligaments around the outside of the knee.

The road back would be a long one, he was told. But Williams insists he'll beat expectations, saying, “I expect to be back by training camp.”

Williams recently ditched his crutches and is starting to walk around, he said.

“It’s a slow walk, but I’ve just got a brace and a compression shoe. I'm just strengthening my quad and walking slowly. But probably in like the next two weeks or so I can start putting more weight on it," Williams said.

Williams' game is built on power, taking on tacklers head on and barreling through defenders as if they're bowling pins. But he isn't among those who wonder if he'll be the same player following this devastating knee injury and complex surgical repair.

“I feel like all my life I’ve been going through adversity and I just always figure out a way to get around it,” Williams said. “So, I mean, if I can’t do what I was doing before, I’m gonna figure out some other kind of way to get the job done.”

Williams is one of three foundational players the Broncos have lost on offense this season. Top receiver Tim Patrick (ACL) got hurt in camp and left tackle Garett Bolles broke his right leg a week after Williams' injury.

Without them, the Broncos (3-7) are mired in a hugely disappointing season with the league's worst offense leading to six one-score losses despite a defense that allows just 17.1 points a game.

The Broncos are averaging 14.7 points. Had they averaged just 19 points in regulation, something they've done 27 times in the past 30 years, they'd be atop the NFL at 9-1.

“Yeah, it's been real hard just seeing the offense struggle,” said Williams, who could have helped them pull out some of the close games. “That's the part that bothers me, and just watching people talk about the players, coaches, the leadership. I mean, it's been hard but I don't think it's going to last much longer.”

“It gives me hope is we're not going out there and just getting blown out,” Williams explained. “I feel that we've got the best defense in the league. We've got a superstar at quarterback, so once he gets it, once he gets the offense down pat, I feel like everything will turn around.”

Even without Melvin Gordon, who was wavied Monday after fumbling at the goal line in Denver's 22-16 overtime loss to the Raiders.

Like his enthusiasum for helping foster kids and foster families, it's another example of Williams' cheery demeanor in the face of adversity, one that's helping him recover from the injury that may have waylaid Denver's season.

“Yeah, that’s all I can do,” Williams said. "I already tore it. The damage is done, I can’t just fix it in one day, and so the only way to attack it is with a positive mindset because, I mean, once I start getting negative, that’s when it’s really gonna be over with.

“So as long as I stay positive, I feel like everything else is gonna fall into place.”