Jets' Cashman believes bad luck behind him, big plays ahead 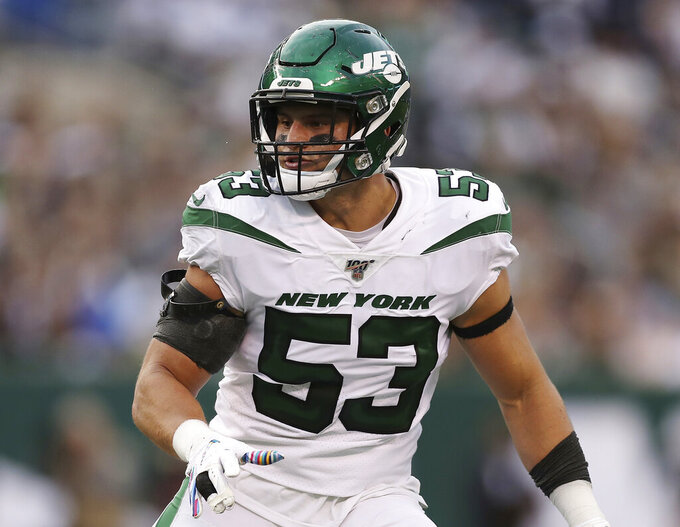 FILE - In this Oct. 13, 2019, file photo, New York Jets linebacker Blake Cashman works during the first half of an NFL football game against the Dallas Cowboys in East Rutherford, N.J. Cashman's right forearm tells his story in black ink. Tattooed images and words are sources of inspiration, with the most recent addition providing a constant reminder: “Always Bet On Yourself.” (AP Photo/Steve Luciano, File)

Tattooed images and words are sources of inspiration, with the most recent addition providing a constant reminder:

“Always Bet On Yourself.”

The New York Jets linebacker got that one this past offseason and it's especially fitting as he pushes through his third NFL training camp following two injury-marred seasons.

“I keep telling myself my bad luck ran out,” Cashman told The Associated Press after a recent practice, “and only good things will come moving forward.”

To some, the 25-year-old Cashman is a forgotten man, already phased out in their minds and replaced by newer, younger players. He's competing for a role and a roster spot, but embraces the doubters.

It's what he has been doing all his life.

“I felt like ever since I graduated high school," Cashman said, "I was left out until I wasn’t.”

And that's a big reason the former Minnesota star is even here.

He wasn't the best, fastest or most talented. But he's resilient, tough and determined. Cashman's blue-collar approach on the field made him a fan favorite with the Golden Gophers. Same thing when he was drafted in the fifth round by the Jets in 2019.

Plenty of negativity has come along the way, much of it beyond his control. That includes the people who laugh and say he's brittle and injury-prone.

“You can’t let that get to you,” he said. “I’m somebody that's, I’m relentless. I block out the negativity. And to get by, even if you have to put on a fake smile, that’s what you've got to do.”

Cashman would ideally like his play to do all the talking — and silence the naysayers. But he has had trouble staying on the field to do so.

“It has been upsetting,” Cashman acknowledged. “I would be lying if I said it hadn’t gotten me down at times and had me frustrated. But those things are just another roadblock, another challenge where you’ve just got to overcome. And I’ve never been someone to quit on myself.”

Even if seemingly everyone else has.

He had shoulder issues in college at Minnesota and then another landed him on injured reserve as a rookie with the Jets. Cashman appeared poised to be a major contributor last season as a fill-in for C.J. Mosley, who opted out because of the coronavirus pandemic, but injured his groin during punt coverage when he his ankle was stepped on.

He came back from that, but ended up back on IR a few weeks later with a hamstring injury — relegated to being a spectator as New York trudged through a 2-14 season.

“I had those thoughts like, ‘Am I made for this?’" Cashman said. "I felt like every single opportunity I was getting, I was getting knocked back. And I kept asking, ‘Why me? Why me?’

“But every time I'd go to that, I guess, dark place, I'd have to remind myself, I just said, ‘That ain’t me. Like, you have to remain positive. This is not how this is going to end. I refuse to let an injury like this, a soft tissue, be the end of my playing.'”

So he dedicated himself to getting into even better shape this offseason, arriving to camp a chiseled 237 pounds.

“There’s no question this is the biggest and strongest I’ve been in my life,” he said.

Cashman spent hours at the Fischer Institute in Tempe, Arizona, as well as ETS Performance in Minnesota, lifting weights five days a week instead of four. He also did a lot of work on his mobility, focusing on his hips and ankles and learning howto prevent the soft tissue in juries that have dogged his NFL career so far. There were also countless conversations with doctors, massage therapists and acupuncturists.

“I was like, what am I doing wrong? What do I need to change?” he said.

Cashman is now competing for playing time at weakside linebacker with rookies Hamsah Nasirildeen and Jamien Sherwood, both converted college safeties. He's learning the defense of new coach Robert Saleh and coordinator Jeff Ulbrich, and is likely to be a key special teams contributor.

“Now it’s a matter of getting on the field and doing it on defense,” Saleh said. “He’s done it before, he’s a phenomenal linebacker and we’re really excited to see him get to work.”

Cashman says not getting snaps with the starters "can play a little mind game and it can be frustrating,” but his focus is staying healthy and making plays when he can.

And in those fleeting moments of doubt, the tattoos are there.

“There’s times where I do look down,” he said, "and I remember and I catch myself not being who I want to be and it kind of steers me back on track.”

There's the North Star, a tribute to his Minnesota roots. Spread bird-like wings serve as a background in one spot, a reminder to “not put a ceiling on what you can do and how great you can be.”

An owl peeks out from the bottom of his inner forearm, an idea he got from former teammate and current Carolina Panthers linebacker Frankie Luvu.

“You just have to stay woke,” Cashman explained, “and see all opportunities that come to you.”

“Time is money and time is the most valuable thing in life,” Cashman said. "You never get any more, but everybody wants more and it’s important to make the most of your time."

And that brings the tour of Cashman's ink to his outer forearm, where he added these words after his rookie season:

It's a tribute to his former college teammate Casey O'Brien, who delivered that line at the end of a speech after beating cancer for the fifth time.

It stuck with Cashman and helps guide him through the doubts, setbacks — and now the comeback he's certain is next.

“Given my circumstances and bad things that I feel like happened to me, some people always got it worse," Cashman said. "You owe it to yourself to be positive about everything you've got that’s going for you, than all that’s against you.”