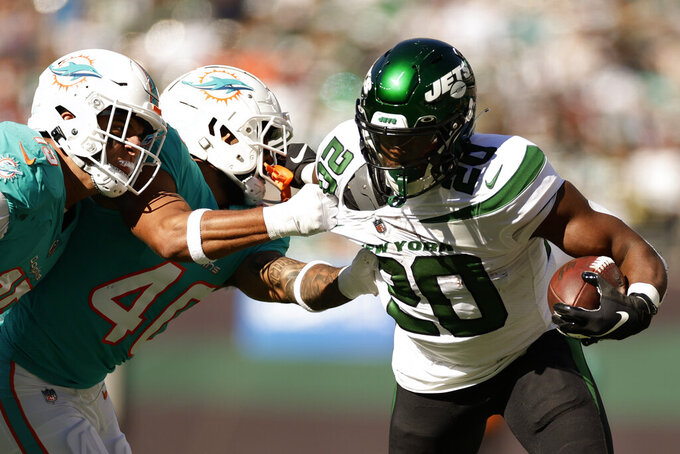 FLORHAM PARK, N.J. (AP) — Breece Hall waited all night to hear his name announced during the first round of the NFL draft.

Thirty-two players later, he went to bed without a team.

But with plenty of hard feelings.

Hall eventually was the first running back drafted, by the New York Jets four picks into the second round at No. 36 overall. And he's playing like a guy who's still ticked off about it.

“I definitely took some receipts,” the former Iowa State star said with a big grin. "It sucked, but I'm here for a reason. It was a blessing for me to be here with this great draft class and everything like that.

“But I definitely do want to prove every week why I should've been a first-round pick and why I was worthy of that. That's internal motivation, for sure.”

And more than the numbers, it was the way he did it.

He got open on a short pass from Zach Wilson that he took 79 yards to the 1 in the first quarter, dragging a few defenders along the way. There was also the short pass in the fourth quarter he turned into a 21-yard gain to put the Jets again at the 1. He later scored a touchdown on a 5-yard run.

“He was awesome,” coach Robert Saleh said. “He’s an explosive player. When we drafted him, it was because we needed a home run hitter on this team, and he did that.”

That came a week after he scored the winning touchdown with a tough 2-yard run with 16 seconds left in New York's 24-20 comeback victory at Pittsburgh.

“I think he’s just brought another element,” wide receiver Braxton Berrios said. “I mean, he’s another weapon that we get to kind of plug and play.”

The Jets are using Hall and Michael Carter, a fourth-rounder last year out of North Carolina, in a dual-threat backfield. Hall is a 6-foot-1, 202-pound thumper with speed; Carter is a 5-8, 201-pound dynamo with a mix of speed, strength and elusiveness.

Hall leads the Jets with 275 yards rushing on 56 carries, while Carter has 158 on 47 attempts. Both have two TD runs, and also have 17 catches each.

“There are a lot of things that you have to account for,” Saleh said of the duo.

Hall was part of the Jets' early draft haul in April that included first-rounders Sauce Gardner, Garrett Wilson and Jermaine Johnson. New York was so stunned Hall was still available in the second round, it traded up two spots with the Giants to make sure it got him.

“I've just been getting better every week and it's just going to continue because the coaches are staying on me,” Hall said. "They think I still have a lot to improve on, so it'll keep getting better.”

Hall pointed out some of the mistakes he made last Sunday. He could've gotten more open on some of his routes, he said, and wasn't happy with whiffing on a block during pass protection.

“I think the thing that goes maybe unnoticed,” offensive coordinator Mike LaFleur said, “is just how smart he is as a football player. He just gets it, he sees it.”

It has been that way for as long as Hall can remember, going back to his middle school and high school days in Wichita, Kansas, where his friends and teammates first started calling him “Breece the Beast” because of his athletic ability.

“It just became sort of like a brand,” Hall said.

The nickname stuck through college at Iowa State, where he broke an NCAA record by running for at least one score in each of his final 24 games. And he continues to be called “Beast” by his Jets teammates.

At home games, Jets fans will often serenade Hall with a loud “Breeeeeece” chant after he runs for a long gain or makes a big catch.

“It's cool and everything,” he said. “It kind of turns you up a little more. You're just ready to get the ball again and keep making plays.”

Hall doesn't care how he makes the plays — whether it's zipping through a hole untouched or shedding some would-be tacklers.

NOTES: Johnson (ankle) was ruled out for the game. ... LB Quincy Williams was a full participant at practice for the first time since being carted from the field against Cincinnati in Week 3 with an ankle injury. He was removed from the injury report Friday. ... Saleh said there's a chance DE Vinny Curry could be activated this weekend from injured reserve. Curry has been out since the beginning of the season with a hamstring injury.