Joe Judge is old-fashioned when it comes to coaching Giants 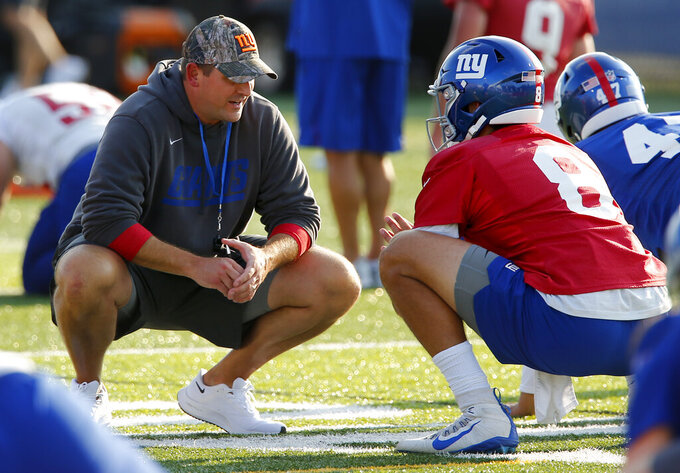 EAST RUTHERFORD, N.J. (AP) — While he might be one of the NFL's youngest coaches, Joe Judge believes in being old-fashioned when it comes to running the New York Giants.

It's the way he learned football as a youngster and he isn't going to change what he felt was a successful method of teaching, even if he is dealing with rich athletes.

If you are going to play for Judge, there are rules to be followed and consequences for breaking them.

It was one of the major points that came across Wednesday as the 39-year-old Judge discussed the Giants' acrimonious end to practice on Tuesday.

Call the incident what you want. Fight. Scrum. Tiff. Free for All. They all fit in some way, but the bottom line was that players got angry and went after one another. It started with two veterans — safety Logan Ryan and tight end Evan Engram — and ended with starting quarterback Daniel Jones on the bottom of the pile.

Judge responded in no uncertain terms. The team had to do pushups, gassers, sprints, and listen to their coach yell at them.

The good news was no one was hurt, Judge said Wednesday. He would not discuss whether any further discipline was doled out, saying it was a team matter.

He also didn't seem to care whether his approach could be considered more appropriate for either high school or college teams. Judge said he talks to his players and explains for his reasoning so they understand him and his goals heading into their second season under him.

“The one thing I’ve really learned from some great coaches that I had the opportunity to play or coach under is they really reaffirmed everything I learned young in the game as a player," Judge said. “That’s really about fundamentals and foundation. It’s about discipline, it’s about culture. So, in terms of the modern day, I know a lot of people have different ways of doing things. I know there’s a proven way that works, and we’re going to stick to the base fundamentals that we believe in.”

Veteran receiver Sterling Shepard said the players expected extra conditioning for mistakes and even more after a blowup.

“That’s kind of the standard that we’ve set here in this building and as a team,” he said. “I think guys have bought in and know what to expect whenever you step on the field and when you’re playing under a guy like Coach Judge. If you don’t like it, you’re welcome to leave.”

A day after the incident, tackle Nate Solder innocently wore a T-shirt with the word "FIGHT" across the front of it.

He laughed when the parallel with the practice Tuesday was pointed out.

“This is about a mentality. It’s not about an activity,” he said.

Judge said his main issue with the scrum was what would have happened in a game. The team would have been penalized 15 yards and a player might have been disqualified.

“The most important part of that lesson we have to learn is ultimately we have to eliminate bad football,” Judge said. “Penalties are bad football. The lesson has to be we’re not doing anything that’s going to get our team in a position to be penalized.”

NOTES: ... Veteran TE Levine Toilolo tore an Achilles tendon in practice Wednesday night and probably will not play this season. ... Former Super Bowl MVP Phil Simms spoke to the team after practice. ... WR Kenny Golladay went to a doctor on Tuesday to have a hamstring injury evaluated. Judge did not have an update but said the team's biggest offseason signing avoided a “worst case scenario.” ... WR Kadarius Toney continues to be eased into practice after being taken off the COVID-positive list. ... Veteran G Joe Looney, who was signed last week, has decided to retire.