Josh McCown hopeful to get a coaching opportunity 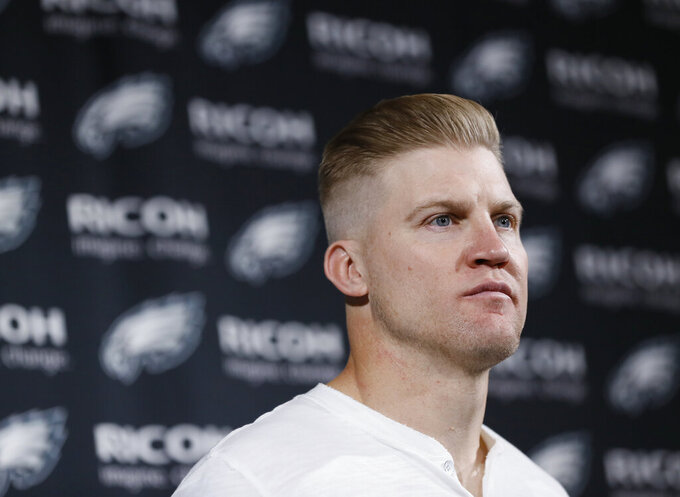 FILE - Philadelphia Eagles' Josh McCown speaks during a news conference after an NFL wild-card playoff football game against the Seattle Seahawks, Jan. 5, 2020, in Philadelphia. McCown played quarterback for 12 teams across nearly two decades in the NFL, and learned a different offense almost every season. He looks forward to sharing his knowledge and experience as a coach. (AP Photo/Michael Perez, File)

Josh McCown played quarterback for 12 teams across nearly two decades in the NFL, and learned a different offense almost every season.

He looks forward to sharing his knowledge and experience as a coach.

“I love being part of teams and being part of a group,” McCown said on the AP Pro Football Podcast. “You start out with that group and you say: ‘OK, let’s go try to do something special, let’s create a process and let’s get better at that process.’ So I really enjoy that, and whether it’s at the high school level or college, I don’t really care and I don’t really care what the position is. I just enjoy being part of teams and so hopefully that’s in the future some day.”

McCown interviewed for Houston’s head coach vacancy after each of the last two seasons. The Texans raised eyebrows when they seriously considered McCown, who spent the final part of his last season in the NFL in 2020 backing up Deshaun Watson. McCown was fresh off the field and had no experience other than helping coach his sons in high school.

Houston hired David Culley over McCown in 2021, fired him and then promoted Lovie Smith from defensive coordinator.

“Maybe pro coaching is in the future,” McCown said. “We’ll see. Certainly the opportunity to meet with and discuss that with the Texans was interesting and special and I learned a lot. (I have) so much respect for the head coaching position that you need to at least go visit with those people and learn and see what it’s about. ... I love the NFL. I enjoyed my career, the different stops. I’ve had so many experiences of what to do, a lot of what not to do. And so I just want to maybe bring that to a team one day and be able to help the team.”

A third-round pick by Arizona in 2002, McCown started for six teams, was part of 12 clubs, including stops in training camp, and had a different offensive coordinator almost every season. He threw his last pass for Philadelphia in a wild-card game against Seattle on Jan. 5, 2020. McCown entered his first career playoff game when Carson Wentz suffered a concussion and finished it playing with a torn hamstring that required surgery afterward.

“I experienced the back half of my career different than I did the front half with a great sense of gratitude for the privilege it is to play in the National Football League,” McCown said. “That’s where my heart is. I just love being a part of teams. And one of those 32, they’re all special, they’re all unique. There’s unbelievable people in those buildings. If that’s where the plan leaves me one of these days, I’ll be thankful for that. Right now, I’ll do the best I can coaching high school football, and then we’ll see where it goes from there.”

McCown has served as an assistant coach at Rusk High School in Texas the past two seasons. His sons, Owen and Aiden, were senior starting quarterbacks in back-to-back years. Owen just completed his freshman season at Colorado. McCown hosts a weekly football podcast called “Scheme” in which he takes a deep-dive into the X’s and O’s.

“I love watching tape and to be able to share that with other people, to kind of give them a better perspective of what’s happening so that we can truly respect every player and especially these quarterbacks nowadays, I’m really enjoying that,” McCown said.