Lamar Jackson amid contract uncertainty: 'I love my Ravens' 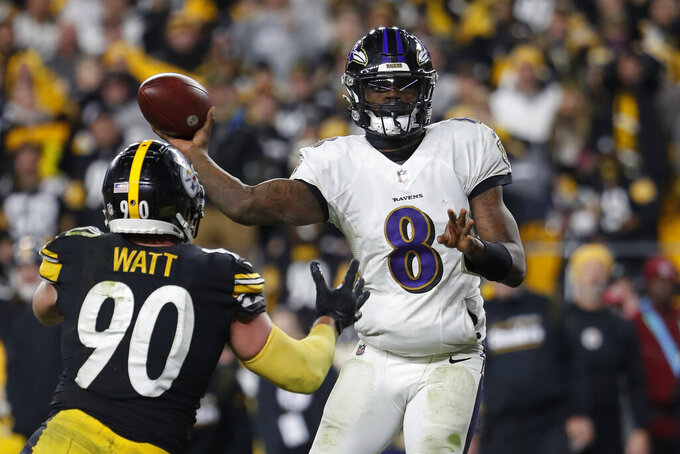 FILE - Baltimore Ravens quarterback Lamar Jackson throws a pass gainst the Pittsburgh Steelers during an NFL football game Dec. 5, 2021 in Pittsburgh. Jackson says on Twitter that he loves the Ravens amid uncertainty about his contract status beyond this year. Jackson said Wednesday, March 30, he didn't know who was putting out a “false narrative” that he was having thoughts about leaving. (AP Photo/Winslow Townson, File)

BALTIMORE (AP) — Lamar Jackson said on Twitter on Wednesday that he loves the Baltimore Ravens amid uncertainty about his contract status beyond this year.

“I love my Ravens I don’t know who the hell putting that false narrative out that I’m having thoughts about leaving,” Jackson said. “Stop tryna read my mind.”

Jackson's contract is an issue in Baltimore for a second straight offseason. The team still hasn't signed him to an extension as he enters next season on his fifth-year option. General manager Eric DeCosta said last month the Ravens were working at Jackson's pace.

Baltimore was decimated by injuries — including to Jackson himself — and finished 8-9 last season.