Lions offense off to fast start through two games 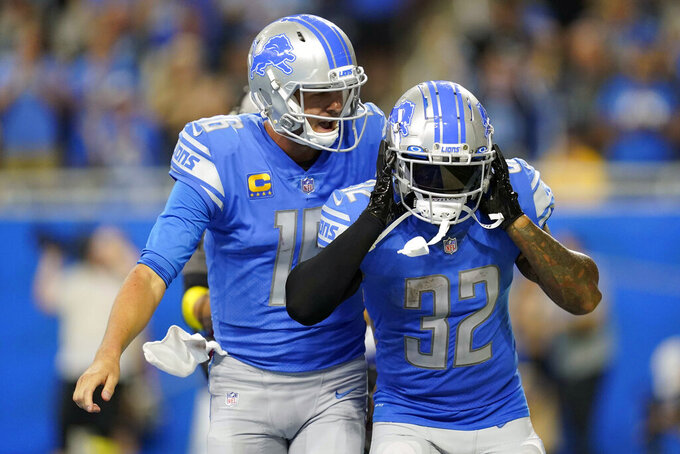 Detroit Lions quarterback Jared Goff (16) celebrates a touchdown with running back D'Andre Swift (32) during the second half of an NFL football game against the Washington Commanders Sunday, Sept. 18, 2022, in Detroit. (AP Photo/Paul Sancya)

ALLEN PARK, Mich. (AP) — Detroit’s offense is clearly a strength so far this season, scoring 71 points in two games and reinforcing the Lions’ belief that the team would be improved.

They are tied with the Kansas City Chiefs for most points entering Monday.

“Offensively we were able to capitalize on points early in that game,” Lions coach Dan Campbell said.

"We got a good lead and we were able to hold onto it.”

Campbell noted that his team rushed 24 times for 191 yards in the 36-27 victory over the Washington Commanders.

Entering Monday, the Lions lead the league in yards per carry at 7.2. The New Orleans Saints are second with 6.5.

Entering Monday, wide receiver Amon-Ra St. Brown is tied with four others for the league lead in receiving touchdowns with three. He had nine catches for 116 yards and two touchdowns to go along with two carries for 68 yards.

D’Andre Swift had five carries for 56 yards and two receptions for 31 yards and a touchdown.

Swift is fourth in the NFL with 200 rushing yards entering Monday.

“Anytime your running back can do both, is an explosive athlete that hurts you in the run and the pass game, that’s trouble for a defense,” Campbell said. “And it gives you a lot of flexibility offensively. On top of that, (St. Brown’s) got the ability to play a little of that in the backfield, which we haven’t even really tapped into just yet.

“Those two guys are pretty dynamic players for us.”

St. Brown has caught a touchdown in six straight games, tying a team record, and is the third player in league history to do so at age 22 or younger.

The others are Randy Moss and Rob Gronkowski. His streak of six straight games with eight or more receptions and a touchdown is a league record.

The Lions did well in the first half against the Commanders, but their pass defense faltered in the second half.

On their first drive of the third quarter, quarterback Carson Wentz needed just five plays to go 64 yards, including a 40-yard pass to Jahan Dotson and a 15-yard touchdown pass to Curtis Samuel.

“They came out in the second half and did a good job,” Campbell said. “That’s a team that’s capable, that’s an NFL team, they’ve won some games, they’ve got good players, they’ve got good coaches. They’re gonna make some plays but man, you’ve gotta make them go the long, hard way. You can’t give up the explosives we gave up just from our own errors.”

Offensive line coach Hank Fraley has had his work cut out for him with having to start three backup linemen on Sunday.

“I would say there is a standard in our offensive line room that doesn’t waver for anybody, no matter who’s on the field,” left tackle Taylor Decker said. “Hank is a phenomenal coach. He’s done a great job. He understands the guys’ personalities and he does a really good job of putting us in positions to succeed.”

The Lions signed DJ Chark Jr. to a one-year deal in the offseason, hoping the 6-foot-4 wide receiver could be a huge option for quarterback Jared Goff. He was targeted four times on Sunday, but had no receptions. In two games, Chark has four receptions for 52 yards and one touchdown.

DL Aidan Hutchinson, who walked off the field gingerly Sunday, is expected to be all right. Campbell said Hutchinson was dealing with a charley horse.

1 — Dan Skipper made his first career NFL start at left guard because of all the offensive line injuries. The 6-foot-9, 330-pound lineman was called up from the practice squad. It is his sixth year in the league yet he has never made a team out of training camp.

“I would say, first and foremost, if anybody in the NFL deserves an opportunity to just go out there and play, it would be him,” Decker said.

The team’s Twitter account showed a video of Skipper’s teammates chanting,” Skip, Skip, Skip,” in the locker room after the game.

The Lions understand that they are going to have to cut down on the average of 32.5 points per game they are allowing.

“Some of it is I’m communicating and you’re not listening to me,” Campbell said. “So there’s a little bit of discipline that we just gotta clean up.”