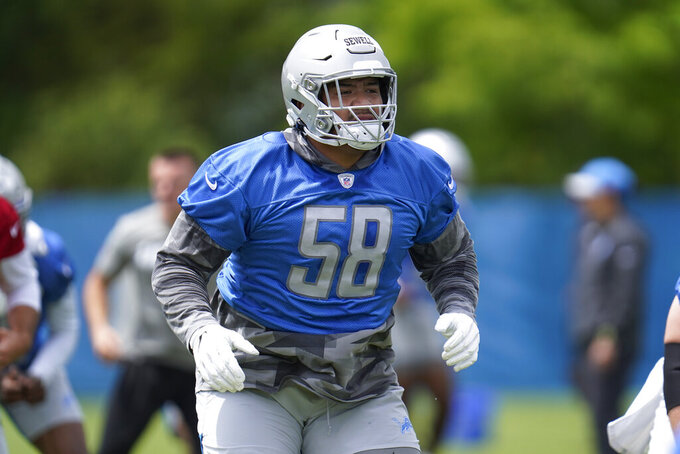 FILE - Detroit Lions offensive tackle Penei Sewell runs a drill during NFL football practice in Allen Park, Mich., in this Thursday, June 3, 2021, file photo. Sewell, drafted No. 7 overall, has faced an NFL opponent for the first time and quickly knows he has a lot of work to do. (AP Photo/Paul Sancya, File)

ALLEN PARK, Mich. (AP) — Penei Sewell knows that scrutiny is part of what comes with being a top-10 NFL draft pick.

So, when the rookie starting right tackle allowed a sack on third-and-10 in the first series of his first exhibition game Friday against the Buffalo Bills, he knew he had to take it in stride.

“At the end of the day,” Sewell said after Monday’s practice, “I can’t change what has just happened. We’ve got to focus on what’s next. I’ve got to get my hands right. Right now, they are too wide, especially going against people in the league. So, I’ve just got to lock in on that and fine-tune on my pad level and get my knees bent back.”

“That wasn’t all him," Campbell said. "It was on the combination (block). ... He needs those reps. For him to come out and not be beat, I’d be shocked.”

Sewell was the No. 7 overall pick by the Detroit Lions in the draft and Friday was his first game action in 19 months. He sat out last season after opting out, and his previous game was Oregon’s Rose Bowl win over Wisconsin in the 2019 season.

Campbell has been impressed with Sewell thus far.

“There are a number of things,” Campbell said. “Just his ability to adjust, it really shows up, the way he’s grown. There are things that he gets beat on the day before that it’s not happening the next day or the next rep. Just to be able to go out there and face a new opponent like the other day, he didn’t throw his hands like he had been and then you see him in the next rep and he does it.”

“Now that I’ve got that first game under my belt, all my nerves have settled down a bit," he said. "Now I know what to expect.”

He connects his “love of the game” that he learned from his father to his ability to adjust so quickly.

“I just go back to my childhood and my dad instilling that early in me: being teachable, be a sponge and soak it in,” said Sewell, who moved from American Samoa to St. George, Utah in 2012.

“My dad was a head coach in the islands. The first thing I remember when I was born is the game of football, and my dad introduced me to that.”

“He had an old picture and I saw it,” Sewell. “He was just really swaggy with a dark visor on the island. From then on, it was like, ‘Yeah, I’ll carry your legacy.’ I made it mine from there.”

“We were just out there trying to make a name for ourselves to pave a way for our future,” Penei said. “To be able to share that moment with my brother, to win a state championship, there’s nothing you can really replace that with. I’ll always cherish that until the moment I die.”

Penei played with his other two brothers, also linebackers. Gabriel was Nevada’s MVP as a senior in 2019, and Noah was a five-star recruit who led Oregon with 45 tackles as a freshman in 2020.

NOTES: Running back D’Andre Swift and defensive end Levi Onwuzurike were held out of Monday’s practice. Campbell said he hoped Swift would be able to practice Tuesday on a “limited basis” and expected Onwuzurike back Tuesday for individual work and “a couple team reps.” ... Campbell said he will schedule more of an actual game plan with each exhibition game so players will “have enough in their toolbox to go to work.” The Lions play at Pittsburgh on Saturday night.