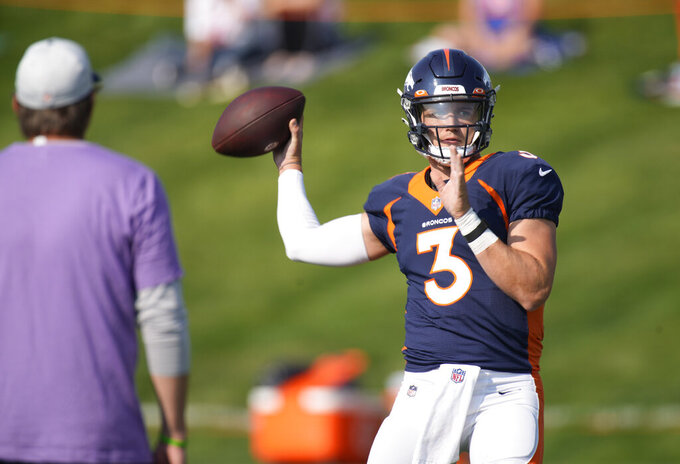 ENGLEWOOD, Colo. (AP) — Erratic practices throughout training camp and a stellar preseason opener for both Drew Lock and Teddy Bridgewater have left Denver fans — and maybe even coach Vic Fangio himself — still wondering who will win the Broncos' starting quarterback job.

Fangio said neither nudged into the lead last weekend at Minnesota, where Lock (153.3) and Bridgewater (144.8) posted the two best passer ratings in the NFL's opening slate of exhibitions games in dicing up the Vikings' backups 33-6.

Lock got the start and went 5 for 7 for 151 yards and two touchdowns, including an 80-yard strike to K.J. Hamler, and Bridgewater completed 7 of 8 passes for 74 yards and a touchdown in relief. He also had a 12-yard TD run that was called back.

Fangio said afterward that their performances validated his notion that “they're even-steven” in this QB clash in which they've traded off good days for bad and have even been inconsistent from one series to the next.

Fangio hopes to have a better idea of who will lead his offense in 2021 after the Broncos' game at Seattle on Saturday night, whether or not Seahawks coach Pete Carroll plays his starters.

Asked if that handicapped his quarterback competition by giving him a less-than-ideal barometer, Fangio said, “It could. But I don't make up the preseason schedule.”

At any rate, Fangio said he's not just basing his decision on preseason games, so even if it's a bevy of backups they're facing again this weekend, “I think we can judge it very accurately."

“I think the practices against Minnesota are telling. I think practices 1s on 1s against ourselves are very telling. And we can’t control what the other teams (do) in these preseason games,” Fangio said.

Asked if he already has all the information he needs to make a decision, Fangio said, “Pretty damn close. But we've got more information coming.”

While everyone around them seems to be evaluating every single snap, Bridgewater and Lock are focused on the bigger picture.

Lock said he's not stressing out over the decision as he did early on.

“The human nature is to dive into it, think about it and almost overanalyze sometimes. That’s just humans being humans,” Lock said. “To say that I’ve never done that in this process, I’d be lying to you. But through the process, you grow, and you figure it out. It really comes down to the basics — control what you can control and worry about yourself and how you can get better and make this team better.

“I feel like I can make this team better by being a better me. That was my main focus going through this.”

NOTES: First-round pick Patrick Surtain II was held out of practice with a lower leg injury, but Fangio said he should be fine. ... OLB Malik Reed (ankle) sat out. ... OLB Von Miller returned to practice after a two-day absence to attend the birth of his son.