Make no mistake, Judge is the boss of the improving Giants 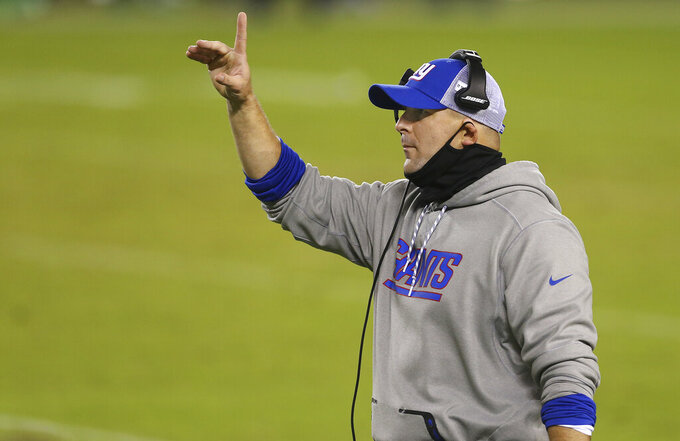 FILE - In this Oct. 22, 2020, file photo, New York Giants coach Joe Judge gestures during the team's NFL football game against the Philadelphia Eagles in Philadelphia. The Giants play the Tampa Bay Buccaneers this week. The game will feature six-time Super Bowl champion Tom Brady against Judge, one of his former coaches with the New England Patriots. The two shared three Super Bowl wins. The Bucs have a 5-2 record. Their only loss in the recent run was a one-point decision to Chicago. The Giants are 1-6 under the 38-year-old Judge. (AP Photo/Rich Schultz, File)

That's all anyone needs to know as the rebuilding Giants head into their bye week after 10 games.

Forget a 3-7 record. Don't bother mentioning they are riding a two-game winning streak and somehow have a chance to win the pitiful NFC East. This is a tough, hard-working team that is invested in their 38-year-old rookie coach's demand to focus on the little things, improve every week, and put the team first.

It's seems everyone is all in. If you're not, there's a price to pay.

Take a look at the recent days and weeks.

Offensive line coach Marc Colombo was upset after Judge told him earlier this week he was hiring veteran coach Dave DeGuglielmo as a consultant to help the line and other parts of the team.

To an outsider, it seemed a odd decision. The young line probably has progressed more than any unit on the team. After a slow start, the offense has produced six 100-yard rushing performances in the past seven games.

A former Pro Bowler and assistant coach with Dallas, Colombo voiced his displeasure. He was fired on Wednesday after less than a year on the job and replaced by DeGuglielmo.

Earlier this month, veteran receiver Golden Tate complained to a national TV audience after catching a touchdown pass in a Monday night game against Tampa Bay. He wanted more passes thrown his way. He was benched the next game.

First-round draft pick Andrew Thomas, the fourth selection overall this year, showed up five minutes late for a meeting the night before a home game with Washington last month. The left tackle didn't start the next day and ended up splitting snaps with fellow rookie Matt Peart.

Judge doesn't hesitate to give his players second chances. Colombo wasn't as lucky. The message is clear: Don't mess with Joe Judge.

His actions bring back memories of former Giants coaches Bill Parcells and Tom Coughlin. Their word was law. Players understood it and played hard because their jobs were on the line.

It worked, too. Parcells and Coughlin each produced two Super Bowl champions for the Giants.

It's too early to compare Judge to either man. He needs to prove himself. However, he seems to be accomplishing half the job. Judge is the man in charge and the players recognize it.

The main question is, can Judge take the next step?

Ben McAdoo was hired in 2016 and led the team to the first playoff berth since the 2011 championship season. He was gone before the end of the next year.

The Giants will have to beat teams outside their division to get to the playoffs this year. Dallas is their only NFC East opponent left, and that's the season finale. New York is at Cincinnati (2-6-1), at Seattle (7-3), home against the Cardinals (6-4) and Browns (6-3), and away at Baltimore (6-3) before the Cowboys (2-7).

"We’re not going to be a team that makes excuses or comes back and says we had them, but this happened instead. That’s not the way we’re made up, that’s not what we’re going to do.”

Judge believes the Giants are getting closer to being what he envisions, so he is reinforcing the need for the basics. Unlike most NFL coaches, he is not hesitant to have tackling drills. He stresses proper techniques, preparation, and being upfront with his players.

Some weeks players will have bigger roles. Some weeks they will be asked to do less. Everyone will contribute in some way every week.

Veteran inside linebacker Blake Martinez also knows there is another side to Judge, who was mentored by Nick Saban of Alabama and Bill Belichick of the Patriots. Judge has three Super Bowl rings from his eight years in New England as an assistant coach and special teams coordinator.

“As you get to see him outside the meeting rooms and things like that, he’s able to connect to anybody,” Martinez said. “He wants to know everything about you, and I think that’s been an awesome aspect of him as a head coach. You’re not scared to talk to him, as he’s always got a joke or two to mess with you about. It’s been fun.”

Coming out of the bye, the Giants need to keep running the ball, which they have done despite losing Saquon Barkley to a torn ACL in Week 2. They also need quarterback Daniel Jones to limit his turnovers. He has had none in the last two games after 13 in the first eight.

The defense under Patrick Graham has been the big surprise, using a multitude of formations. It has only been blown out in one game. The big weakness has been finding a cornerback to play opposite outstanding free agent signing James Bradberry.

Judge cares deeply about his guys. When Logan Ryan’s wife had an ectopic pregnancy and needed emergency surgery in the early morning hours after the Bucs game, Judge told the veteran if he needed to be with his wife, just go.

“He’s more of a players’ guy than he might want to come off as,” Ryan said earlier this year. “I think he can relate to the player, and he does a good job of connecting to you and your family.”