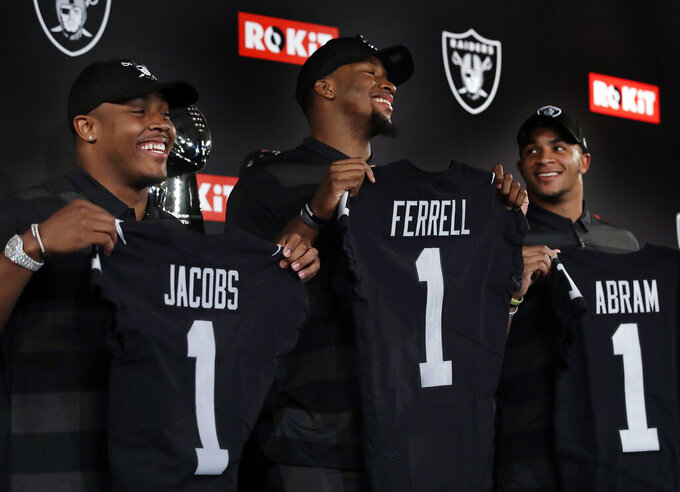 ALAMEDA, Calif. (AP) — Soon after Mike Mayock moved from the role of draft analyst to Oakland Raiders general manager, former Baltimore GM Ozzie Newsome warned him that having an opinion is far easier than making a decision.

Now that his first draft as an NFL general manager is over, Mayock said that resonated with him with each decision he made all weekend.

"The difference is just ownership," Mayock said Saturday. "Skin in the game. It just meant something different this week for me. At the end of the day, we won't know how we did for a couple of years. But we couldn't feel better today because we stayed consistent to our philosophy and we drafted the kind of guy we want to bring into this building."

One common theme that developed was that the Raiders were focused on more than just size, speed and how players looked on game tape.

With the team moving to Las Vegas in 2020, Mayock and coach Jon Gruden also wanted to make sure they added players who could handle whatever distractions would come with being in Sin City.

"It's very, very challenging," Gruden said. "You have to have a lot of maturity. We wanted guys that weren't only great football players in talents but guys that could handle the circumstances of being front-line players, leaders, and also having a lot of maturity to handle the move of the franchise."

The players the Raiders drafted this weekend fit that bill with first-round picks Clemson defensive end Clelin Ferrell and Alabama running back Josh Jacobs overcoming difficult childhoods to excel on and off the field as college players.

The Raiders ended up with other players with strong leadership skills on day three of the draft, including LSU tight end Foster Moreau in the fourth round and Clemson receiver Hunter Renfrow in the fifth.

"Obviously, from a player standpoint, people might think that players' focus can get off track when you move to a city like Las Vegas," Ferrell said. "From what I know so far, we're trying to bring in the right guys that, regardless of the situation of the outside sources, they have a vision for themselves as far as the football player in their life.

"Obviously, when you're young you're going to enjoy life, but you have a vision, so anything that detracts off that you're not going to let it interfere. It's all about making the right decisions."

The Raiders also targeted players with winning pedigrees with four of the picks coming from players who participated in the national championship game this past season.

Oakland took three from Clemson — Ferrell, cornerback Trayvon Mullen in round two and Renfrow — and Jacobs from Alabama. Gruden even joked on his congratulatory call to Renfrow on Saturday that the Raiders would look to add Tigers coach Dabo Sweeney next.

Here are some other takeaways from draft weekend:

The Raiders came into the draft with three first-round picks thanks to last year's deals that sent star edge rusher Khalil Mack to Chicago and receiver Amari Cooper to Dallas. Oakland turned those picks into Ferrell, Jacobs and Mississippi State safety Jonathan Abram. Mayock then got busy the next two days, trading down four times to get more picks and then up once to seize Renfrow in the fifth round.

The other players selected were: Mullen in the second round; Eastern Michigan defensive end Maxx Crosby, Houston cornerback Isaiah Johnson and Moreau in the fourth; Renfrow in the fifth; and Prairie View A&M edge rusher Quinton Bell in the seventh round.

The biggest surprise came in round one when the Raiders took Ferrell fourth overall ahead of a more heralded pass rusher like Kentucky's Josh Allen or Houston's Ed Oliver. Mayock said the Raiders had Ferrell rated right behind Ohio State's Nick Bosa at edge rusher and were happy to take him fourth when no opportunities to trade down materialized.

The biggest needs for the Raiders heading into the draft were finding edge rushers to upgrade a defense that had an NFL-low 13 sacks last season, a featured running back to replace Marshawn Lynch, and more help in the secondary.

Those needs were all targeted on the first two days of the draft and now the team must wait to see if the players chosen can deliver on their potential.

The Raiders have targeted most of their needs this offseason but still could be looking for more help on the interior of the offensive line after trading guard Kelechi Osemele to the Jets last month.

Edge rusher remains a big need, even after the additions of Ferrell and the two third-day picks. Oakland did little to address the position in free agency, with Benson Mayowa the most prominent addition, and could try to find a veteran on the market before training camp.