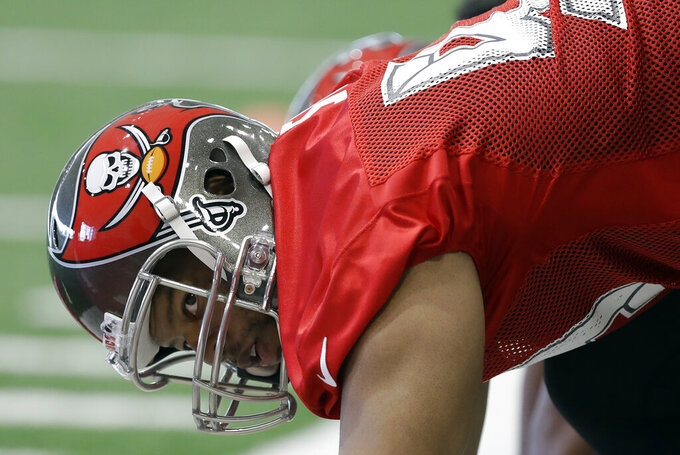 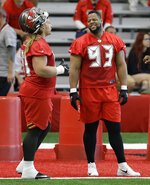 TAMPA, Fla. (AP) — Ndamukong Suh welcomes the challenge of making a difference for yet another team.

The three-time All-Pro defensive tackle slipped on his customary No. 93 jersey and practiced with the Tampa Bay Buccaneers for the first time on Tuesday, joining teammates for the start of a three-day mandatory minicamp.

The Bucs will pay Suh, a five-time Pro Bowl selection playing for his fourth NFL team, up to $10 million as a replacement for Gerald McCoy — released last month after nine seasons as the face of Tampa Bay's defense.

The 32-year-old Suh, who helped the Los Angeles Rams reach the Super Bowl last winter, was the second overall pick in the 2010 draft.

McCoy, a six-time Pro Bowl selection who also wore No. 93 for the Bucs, was the third player taken that year.

"Obviously he's a good player with a proven track record," defensive coordinator Todd Bowles said of Suh, who spent five years with the Detroit Lions and three with the Miami Dolphins before signing with the Rams in 2018.

As head coach of the Jets, Bowles tried to recruit the defensive tackle to New York before Suh joined Los Angeles.

"We talked a year ago. ... It didn't work out, obviously, but we developed a good rapport, talking on the phone and understanding each other, what I was looking for, what he was looking for," Bowles recalled.

"So this time around when I called him, it was kind of funny. It kind of fell back to the same conversation," Bowles added. "There was a lot of comfortability between us two and everything worked out."

Even though Suh wears the same number and will be counted on to fill a void created by McCoy's departure, the 10th-year pro maintains he doesn't consider himself a replacement for the former Bucs captain, who's since signed with the Carolina Panthers.

"I'm definitely not taking Gerald's spot. Gerald set the tone at this franchise for many, many years. Very successful. Played at a very high level. I've got a great relationship with him," Suh said last week.

"I wish him all the best in his endeavors," Suh added. "I'm not here to replace him, I'm here to kind of make my own path alongside this team and be a shining emblem of some sort to help get to a winning successful situation."

The Bucs, coming off consecutive 5-11 finishes, haven't made the playoffs since 2007 — the second-longest drought in the NFL.

Suh is excited to have an opportunity to be part of the solution.

"Whether I was a rookie in Detroit or being a ninth-year guy in LA, I've always been a leader of action, and I think actions speak louder than words. I've always prided myself on that," he said.

Teammates are just beginning to get to know Suh, however they like what they've seen so far.

"It's exciting times. We're happy to have him in the building," defensive lineman Beau Allen said.

"He's been doing it for a long time. Had a great year obviously last year with the Rams," Allen added. "I've seen him on tape forever. ... I'm happy to get to know him personally, instead of just seeing him on film."