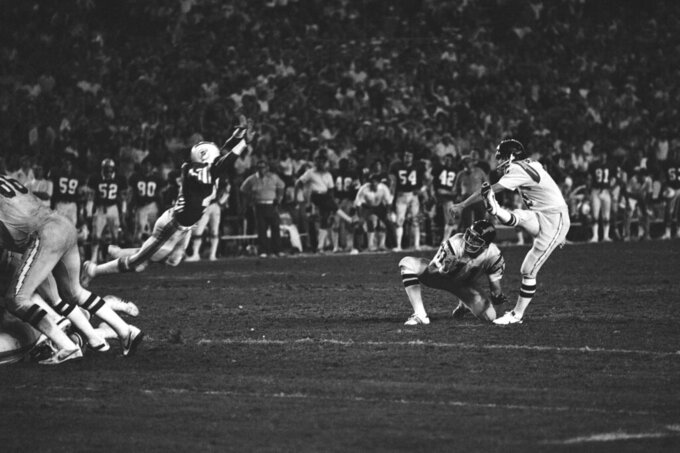 MIAMI (AP) — As part of its celebration of its 100th season, the NFL is designating a Game of the Week, each chosen to highlight a classic matchup.

For this week, it is the Chargers-Dolphins game.

To mark each Game of the Week, the AP will be reprinting its story of a classic matchup in the rivalry. The following is the story from the 1981 AFC playoff game at Miami, first published on Jan. 2, 1982, and written by Sports Writer Bruce Lowitt.

MIAMI (AP) — Rolf Benirschke, given a reprieve after he had blown an easy field goal early in overtime, kicked a 29-yarder 13:52 into the extra period to give the San Diego Chargers a 41-38 victory over the Miami Dolphins on Saturday night in the American Football Conference playoffs.

The triumph by the Chargers, in a game in which records were set for scoring, wiped out what might have been a most heroic comeback by Don Strock and the Dolphins, who rallied from a 24-0 deficit.

The Chargers, champions of the AFC West, will play in their second consecutive conference championship Jan. 10. Their opponent will be the winner of Sunday's AFC playoff between Buffalo and Cincinnati.

The Chargers tied it 38-38 with 58 seconds remaining in the fourth quarter on Dan Fouts' third touchdown pass of the game, his second to rookie running back James Brooks.

The game went into overtime, the Chargers winning the coin toss and taking the kickoff and marching from their 13-yard line to the Miami 8. The big play came on third-and-20 at the Chargers 45. Fouts completed a pass to Winslow, who dragged a Miami tackler the last five yards or so to gain 21 and a first down. But four plays later, Benirschke, who had hit all nine of his field goal tries from inside the 30 this season, hooked a 27-yarder to the left.

The Dolphins charged back late in the overtime, reaching the San Diego 17. But von Schamann's 34-yard field goal attempt was blocked, this time by Leroy Jones.

After von Schamann's overtime miss, Fouts began the Chargers' winning drive from their 16 with a couple of short passes, a 7-yarder to Brooks and an 8-yarder to Wes Chandler. After an incompletion, Fouts and Chandler hooked up on a 20-yard pass play to the Miami 49. Fouts found Charlie Joiner on a play that carried 39 yards to the Miami 10. Then, on first down, Benirschke ended this wildest, highest-scoring of playoff games.

The 79-point total surpassed the all-time playoff record of 73 established by Washington and Chicago in the Bears' 73-0 National Football League championship victory in 1940, and equaled in 1957 when Detroit beat Cleveland 59-14.

The Dolphins appeared to be out of it after the Chargers rolled up their 24-point lead in the first quarter. But Strock, replacing ineffective David Woodley at quarterback, rallied the Dolphins within a touchdown at halftime, then drove them to a 38-31 lead early in the fourth quarter.

The Miami comeback began with a 35-yard field goal by von Schamann, then Strock found Rose on a 1-yard scoring toss.

The most electrifying play of the game, the final one of the first half, had the Orange Bowl crowd of 73,735 rocking. Strock, with 6 seconds left and the ball on the San Diego 40, tossed 15 yards to Duriel Harris, who then wheeled and lateraled to Tony Nathan. The Miami running back sprinted the remaining 25 yards untouched to cut San Diego's lead to 24-17.

Strock came out throwing in the third quarter, hitting Harris for 30 and 19 yards before passing 15 to Rose for the touchdown that tied it, 24-24.

Then it was Fouts' turn. Following a Miami punt, the San Diego quarterback flipped a 12-yarder to Winslow to put the ball in Miami territory, and five plays later found his tight end again with a 25-yard scoring pass, beating a Dolphins blitz that left Winslow wide open in the middle of the end zone.

San Diego's lead held up for less than three minutes.

Strock marched the Dolphins from their 17 to midfield, the big play a 23-yard pass to Jimmy Cefalo. Then came the biggest: The bomb to Hardy, who caught the ball at the Chargers 25 a step behind Woodrow Lowe, and raced to the end zone, diving over as the San Diego linebacker caught and tackled him.

The Dolphins took their first and only lead of the game 7 seconds into the fourth quarter when Nathan swept 12 yards into the end zone after free safety Lyle Blackwood had intercepted Fouts. Blackwood returned the ball 9 yards to the San Diego 36, then lateraled to cornerback Gerald Small, who ran it 21 yards more.

With tie winding down, the Dolphins appeared poised to wrap up a victory as they steadily pushed deeper into San Diego territory.

But with 4:39 remaining in regulation, rookie fullback Andra Franklin fumbled at the San Diego 18 and strong safety Pete Shaw recovered.

Fouts started throwing immediately, hitting Joiner for 14 yards, Chandler for 6, then Joiner for 5 and 15, putting the ball at the Miami 40. Four plays later, Fouts and Chandler teams for a 19-yard pass play to the Miami 9, then Brooks made the tying TD catch. Fouts completed 7 of 8 passes for 75 of the 82 yards the Chargers covered in the drive.

The Chargers came within four points of Oakland's record 28 scored in the first quarter of a playoff, and they appeared poised to blow the Dolphins out of the Orange Bowl.

Their scoring started routinely enough with Benirschke kicking a 32-yard field goal 5:11 into the game, four plays after Fouts and Chandler had teamed on a 47-yard bomb to the Miami 232.

The Dolphins went nowhere on their first possession, then Chandler made it 10-0 with a 56-yard punt return for a TD.

Chandler, the short man in front of Brooks, took the kick at his 44, cut right, got a solid block from Keith Ferguson and raced down the right sideline for the Chargers' first touchdown with a punt return since Mike Fuller did it in New Orleans with an 88-yard spring in 1977.

The already-stunned Dolphins fans were shocked even more just seconds later. The kickoff was a short one, far from Miami's players. Hank Bauer, racing downfield, fell on it at the Dolphins 29 for the Chargers.

Seven plays later, Chuck Muncie swept 1 yard into the right corner of the end zone for a 17-0 lead.

There was still 3:58 remaining in the opening quarter, more than enough time for another score, and the Chargers got it.

Woodley's pass bounced off the hands of intended receiver Tommy Vigorito and was intercepted by free safety Glen Edwards, who returned the ball 35 yards to the Miami 11. A 3-yard run by Brooks preceded his 8-yard scoring catch. Fouts dropped back and flipped the flare to Brooks, who swept around left end into the end zone.

The 24 points matched the most ever given up by the Dolphins in a quarter, the feat first achieved by Kansas City in 1968.

Woodley, an eighth-round draft choice by the Dolphins in 1980, completed just 2 of 5 passes for 20 yards and was sacked three times for 29 yards in losses before Strock replaced him 2:55 into the second quarter.

It was the sixth time Strock had come to Woodley's rescue this season, once because of injury.