NFL ICYMI: All ends well for Cowboys after flip over toss 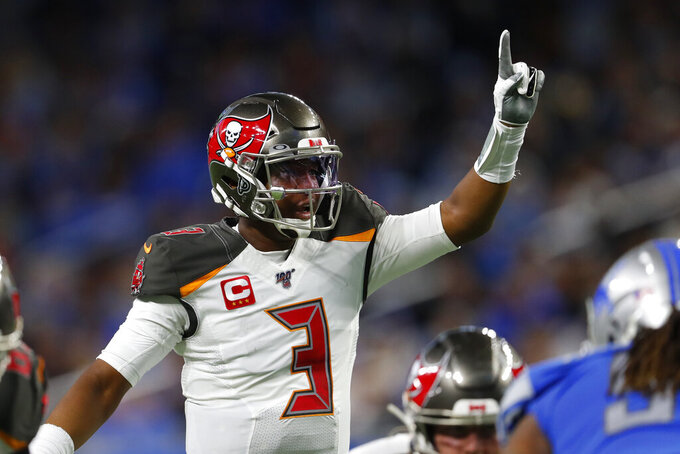 It was the debate about da boot.

Like almost everything else in Sunday's game, it worked out just fine for the Cowboys.

A boneheaded beginning ended as a funny footnote after Dallas quarterback Dak Prescott said “kick” before he said “defer” when the Cowboys won the opening coin toss before their game against the Rams — thus opening the possibility that the Cowboys might have to kick off to start both halves.

Officials on the field and at the league offices reviewed the episode and decided Prescott had, in fact, said “defer.” And so, the Cowboys ended up getting the ball to start the second half.

No harm, no foul and, frankly, the question of who would receive the second-half kickoff — not revealed to the viewing public until the teams came out to start the third quarter — was pretty much all that passed for drama in this one.

In this key battle between playoff contenders, the Cowboys won 44-21, and had ample opportunity to kick off — a grand total of nine times, in fact: once to start the game, then eight more times after each of their scores.

In case you missed it, here's some more of the good, bad and ugly from around the league on the 15th Sunday of the NFL season:

SIDELINE CAM: The most heavily scrutinized piece of video coming out of Sunday might not be from a missed call, a hard hit or even the Cowboys coin toss. Rather, it could be from the camera of the Patriots employee who filmed the Bengals sideline during Cincinnati's game against Cleveland last week. During its pregame show, Fox Sports revealed the video that shows the confrontation between the Patriots employee, who was supposed to be shooting footage of a New England advance scout, and a Bengals security worker wondering why all the videographer's footage was of the Cincinnati sideline. Patriots coach Bill Belichick, busted previously for video shenanigans, has denied any wrongdoing. The NFL is expected to get to the bottom of the issue this week. Side note: Seven days after the video was shot, New England defeated the Bengals 34-13.

BACKDOOR: There are no meaningless touchdowns in the NFL. Anybody who bet on the Eagles-Redskins game certainly knows this story. With 6 seconds left and the Eagles needing only to prevent a Redskins miracle to seal the victory, they instead scored a touchdown. On the game's last play, Redskins quarterback Dwayne Haskins lost the ball, and Nigel Bradham scooped up the fumble and rambled to the end zone. A four-point lead became a 10-point victory, 37-27, and thus, Philly covered the 5-point spread.

BYE-BYE OAKLAND: The final play at the stadium known as the Black Hole was a desperation pass that fell harmlessly to the turf in the end zone. The Raiders blew a 13-point, fourth-quarter lead and lost 20-16 to Jacksonville in their final game at what had long been known as Oakland–Alameda County Coliseum. Oakland's last two games of the season are on the road. Next year, they'll become the Las Vegas Raiders and open play at a $2 billion stadium being built near the Strip.

FOR BETTER AND FOR WORSE: Jameis Winston leads the league in passing — in virtually every category. The Buccaneers' quarterback threw for 458 yards, four touchdowns and one interception in Tampa Bay's 38-17 win over Detroit. Winston now leads the league in passing yardage (4,573), along with completions (342), attempts (554) and, yes, interceptions (24, which are eight more than the next person on the list). The four touchdowns, meanwhile, gave Winston 30 on the season and moved him within three of league leader Lamar Jackson.

HEISMAN UPSTAGED: Baker Mayfield and Kyler Murray both have Heisman Trophies. Only one had Kenyan Drake. The much-anticipated meeting between the last two Heisman winners, who also happened to be the last two No. 1 picks in the draft, who also happened to be teammates at Oklahoma, was upstaged by Drake, the running back who became the first Cardinals player to score four touchdowns since 1993. Drake's four scores gave Arizona a 38-24 victory over Cleveland and gave Murray (219 yards, one TD) bragging rights over Mayfield (247 yards, two TDs). It also helped ensure that Cleveland, one of the offseason's most hyped teams and now 6-8, will not finish over .500.