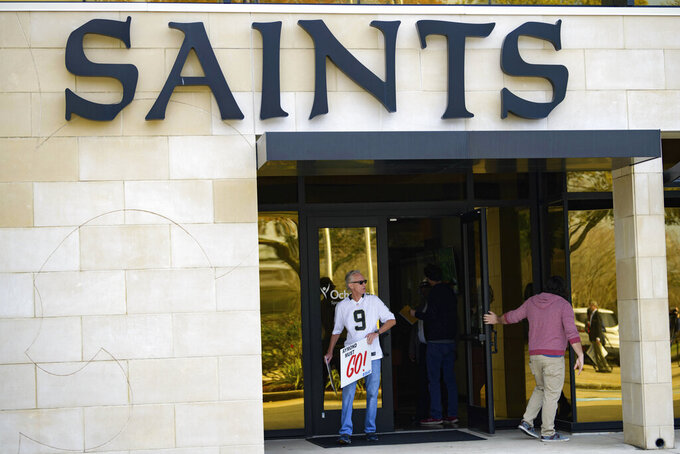 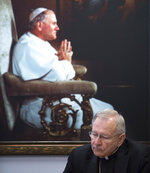 NEW ORLEANS (AP) — The New Orleans Saints say they only did “minimal” public relations work on the area’s Roman Catholic sexual abuse crisis, but attorneys suing the church allege hundreds of confidential Saints emails show the team's involvement went much further, helping to shape a list of credibly accused clergy that appears to be undercounted.

New court papers filed this week by lawyers for about two dozen men making sexual abuse claims against the Archdiocese of New Orleans gave the most detailed description yet of the emails that have rocked the NFL team and remain shielded from the public.

“This goes beyond public relations,” the attorneys wrote, accusing the Saints of issuing misleading statements saying their work for the archdiocese involved only “messaging” and handling media inquiries as part of the 2018 release of the clergy names.

Instead, they wrote, “The Saints appear to have had a hand in determining which names should or should not have been included on the pedophile list.”

“In order to fulfill this role ... the Saints must have known the specific allegations of sexual abuse against a priest ... and made a judgment call about whether those allegations by a particular victim against a named priest were, in its opinion, legitimate enough to warrant being included," the attorneys wrote. They added, “It cannot now be disputed that the Saints had actual involvement in the creation of the pedophile list.”

That list, the Saints’ role in it and how accurate it was have become key questions in a controversy that has swirled around the team since news of the emails broke last week.

Victims’ advocates have long argued that the New Orleans Archdiocese's list of 57 credibly accused clergy, since expanded by six more names, minimizes the problem. An Associated Press analysis of the list suggests it underestimated the actual number of publicly accused clergy members in the region by at least 20.

Plaintiffs’ attorneys alleged in earlier court papers that Saints executives joined in the archdiocese’s “pattern and practice of concealing its crimes," and one email from late 2018 referred to Saints Senior Vice President of Communications Greg Bensel joining unnamed “third parties” in a discussion about “removing priests from the pedophile list." It was not clear which other Saints officials may have been involved.

The Saints, whose devoutly Catholic owner Gayle Benson is close friends with the local archbishop, have disputed as “outrageous” any suggestion that the team helped cover up crimes. They have accused plaintiffs’ attorneys of mischaracterizing what is in the emails.

Even as the team’s attorneys went to court to keep the 276 documents from being released to the public, they said in a court filing this week, "Neither the Saints nor any of their personnel have anything to hide.” The team says it does not object to the emails becoming public later if they are admitted into evidence in the case.

In a lengthy statement Wednesday, the Saints said Bensel, the team spokesman, advised the archdiocese to be “direct, open and fully transparent” when it released its list to the media and to make sure all law enforcement agencies were alerted.

“Never did the Saints organization offer advice to conceal information,” the team’s statement said. “In fact, we advised that as new information relative to credible evidence about other clergy came to light, then those names should be released and given to the proper authorities.”

In its own statement Thursday, the New Orleans Archdiocese disputed the plaintiffs' attorneys on the Saints' role, saying it was “limited to guidance in releasing information to media" and not advising on the content of the accused clergy list.

The National Football League has not responded to repeated queries from the AP about whether such PR work by the team was appropriate or violated league conduct policies.

But victims’ advocates say the Saints have at least created the appearance of impropriety.

“It’s inappropriate for a football team to involve itself in a sex abuse scandal,” said Kevin Bourgeois, who is both a local volunteer leader of the Survivors Network of those Abused by Priests and a Saints season ticket holder.

“Their response was that they told the archbishop to be straightforward and open,” said Bourgeois, who wore a black Saints jersey at a news conference this week outside the team’s suburban practice facility. “And we believe that that’s completely not true.”

The AP, which first reported on the Saints email controversy last week, filed a motion with the court this month supporting the release of the documents as a matter of public interest.

Both the Saints and the archdiocese have opposed the AP’s involvement, and a court hearing was set Friday on whether the news organization may be heard. After that, another hearing will be scheduled to consider whether the Saints emails given to plaintiffs’ attorneys may be released to the public.

The litigation has brought fresh attention to the process by which the New Orleans archdiocese came to produce its list of 57 names of clergy it deemed “credibly accused” of sexually abusing minors — the first roster of its kind to be released in heavily Catholic Louisiana.

The list was published in November 2018 as the archdiocese was reeling from a scandal in which a longtime deacon and schoolteacher, George F. Brignac, continued serving as a lay minister in the church decades after he was accused of sexually abusing children. An Orleans Parish grand jury indicted Brignac last year on claims he raped an altar boy beginning the late 1970s.

An AP investigation identified 20 clergy members who had been accused in lawsuits or charged by law enforcement with child sexual abuse who are missing from the New Orleans archdiocese list — including two who were charged and convicted of crimes.

Meanwhile, a new lawsuit accuses local church leaders of refusing to disclose the names of 17 people accused of abusing children at a church-run home called Madonna Manor in suburban Jefferson Parish. The names were omitted from the list even though the archdiocese has paid millions of dollars to settle claims of sexual abuse at the home, the lawsuit says.

When the credibly accused list was released in late 2018, Archbishop Gregory Aymond expressed confidence in its accuracy and said it implicated 2 percent of local clergy following a review of 2,432 files dating to 1950.

That percentage would be significantly lower than the representation of abusive priests seen in jurisdictions around the country, said Terry McKiernan, founder of BishopAccountability.org, a Massachusetts-based nonprofit group that tracks clergy sexual abuse cases.

The church’s own numbers, published by the U.S. Conference of Catholic Bishops, put the national average around 6 percent, while some advocacy groups contend it’s as high as 10 percent.

McKiernan said it would be “objectionable” for Bensel to hold the dual role of directing damage control and weighing in on the contents of the credibly accused list.

“One would hope that the church is not viewing this as a PR matter anymore but a matter for truth and justice," McKiernan said. "If you have someone helping you spin not only the problem but the supposedly accurate list that describes the problem, you have a lot of work to do.”