Nick Sirianni, Jalen Hurts have Eagles on verge of playoffs 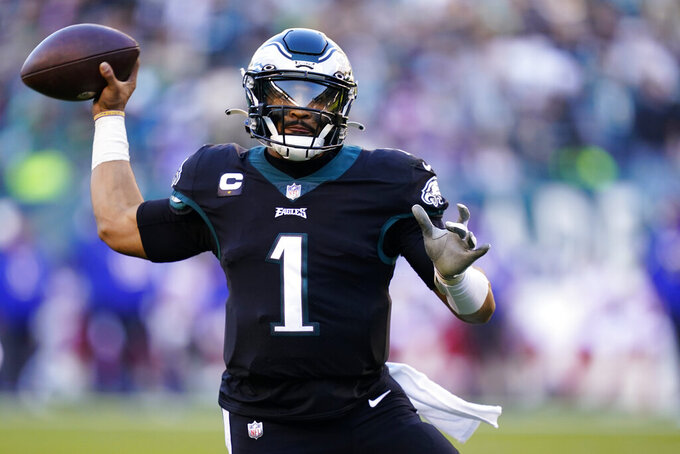 Philadelphia Eagles' Jalen Hurts passes during the second half of an NFL football game against the New York Giants, Sunday, Dec. 26, 2021, in Philadelphia. (AP Photo/Laurence Kesterson)

Nick Sirianni and Jalen Hurts have the Philadelphia Eagles on the verge of a playoff berth.

Simply getting to this point after a 2-5 start is impressive.

Hurts rebounded from a poor first half to lead Philadelphia to a 34-10 win over the New York Giants on Sunday, putting the Eagles (8-7) in the seventh spot in the NFC with their sixth win in eight games.

There’s a scenario in which Philadelphia would clinch a wild-card berth with a victory at Washington (6-9) this week. The Eagles have already doubled their win total from last year, but they’re not satisfied.

The Eagles’ turnaround started when Sirianni began to emphasize the run. Philadelphia had rushed for 175 yards or more in seven straight games before compiling 130 against the Giants.

Hurts has steadily improved throughout the season, with some bumps along the way. Following an excellent performance against Washington on Tuesday night, he struggled in the first two quarters vs. New York. But Hurts made all the plays in the second half and finished 17 of 29 for 199 yards with two touchdowns.

“He is a resilient guy,” Sirianni said Monday. “He’s able to fight through and stay in the moment. I know that’s what you want out of all your players. ... The game he played against the Giants was his worst game of the year and see how he’s rebounded from that. So, it speaks so much. The guy has great character, great football character. Just what you want out your quarterback and one of your leaders.”

Running the ball behind a powerful offensive line has been a key to Philadelphia’s success. Miles Sanders, Jordan Howard and Boston Scott combined for 123 yards on 28 carries against the Giants. Whoever is running the ball is finding open lanes behind that line.

The Eagles need to start faster. They have zero points in the first quarter in three of the last four games.

Rookie running back Kenny Gainwell fumbled the opening kickoff but it was recovered by teammate J.J. Arcega-Whiteside. Gainwell didn’t get a carry even though Sanders and Howard left with injuries.

Sanders will miss at least one game with a broken hand but Sirianni said the team is hopeful he’ll return, so he’s no going on injured reserve. ... Howard sustained a stinger but it’s possible he’ll play this week. ... Right guard Nate Herbig has a minor knee sprain.

30 - The Eagles have scored 30 or more points seven times this season. They’re averaging 29.9 points per game since Week 8, which is second highest in the NFL in that span behind Indianapolis (31.4).

The Eagles visit Washington (6-9) next Sunday. They beat Washington 27-17 last Tuesday in a game that was pushed back two days because of COVID-19.