No Watt, Haden or Dotson for Steelers as they head to LA 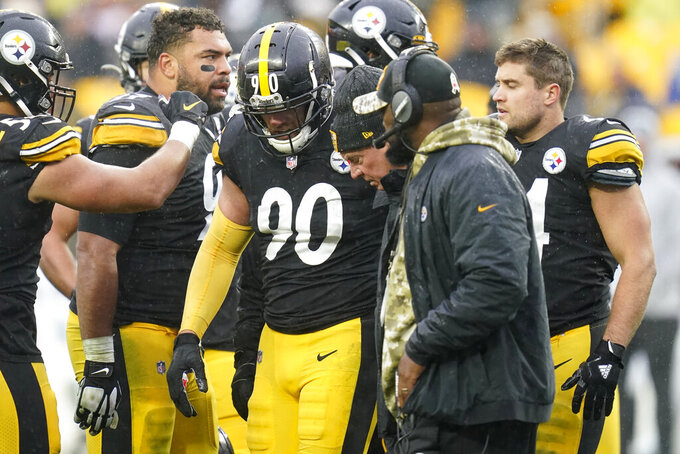 Pittsburgh Steelers outside linebacker T.J. Watt (90) is helped off the field after being injured during the second half of an NFL football game against the Detroit Lions, Sunday, Nov. 14, 2021, in Pittsburgh. (AP Photo/Keith Srakocic)

PITTSBURGH (AP) — The Pittsburgh Steelers will head to Los Angeles to face the Chargers without star outside linebacker T.J. Watt.

The team ruled Watt out Friday after he missed a third straight day of practice due to hip and knee injuries suffered in last week's tie against Detroit.

Pittsburgh also ruled out cornerback Joe Haden and starting left guard Kevin Dotson. Haden is dealing with a foot injury, while Dotson hurt his ankle against the Lions.

Watt is second in the NFL with 12 1/2 sacks through nine games for Pittsburgh (5-3-1). His last sack — a takedown of Detroit's Jared Goff — could prove costly. Watt laid on the ground for several minutes after dropping Goff. Though Watt did make his way to the medical tent without assistance, he was unable to practice this week. This is the second game this season Watt will miss. A groin injury sidelined him for a Week 3 loss to Cincinnati.

The Steelers are thin at outside linebacker after trading veteran Melvin Ingram to Kansas City earlier this month. Alex Highsmith, Taco Charlton and Derrek Tuszka are the only other players on the active roster who have played outside linebacker for Pittsburgh this season. Charlton and Tuszka are reclamation projects after being signed to the practice squad in September.

Watt's 62 career sacks at the second-most in NFL history for a player in his first 70 games. Highsmith, Charlton and Tuszka have combined for 14 1/2 sacks during their respective careers.

Haden's absence likely means James Pierre and Cam Sutton will start at outside cornerback against the Chargers. Pittsburgh's secondary will likely also be missing safety Minkah Fitzpatrick, who was placed on the COVID-19 list on Monday. Tre Norwood is lined up to take Fitzpatrick's spot.

The Steelers do have a little bit of experienced depth along the offensive line with Dotson out. B.J. Finney, who has started 13 games across five seasons, is available to fill in for Dotson. Trai Turner, who like Dotson injured his ankle against the Lions, will play.

Pittsburgh will get wide receiver Chase Claypool back Sunday night. Claypool did not play against the Lions due to a toe injury suffered in a victory over Chicago on Nov. 8.

Mason Rudolph will make his second straight start if Roethlisberger is unable to go.