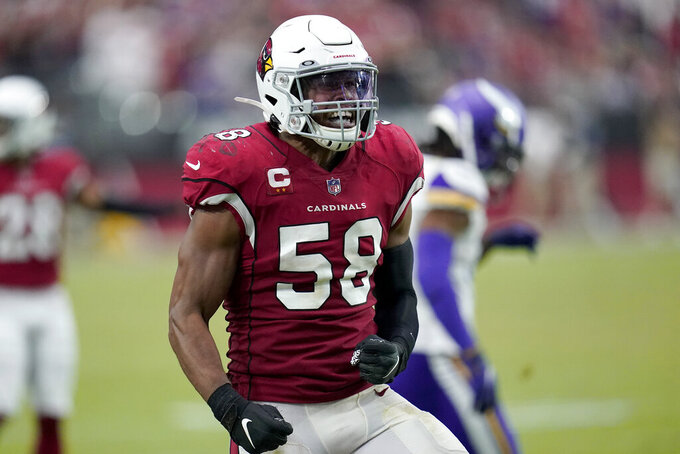 TEMPE, Ariz. (AP) — Linebacker Jordan Hicks was 28 years old and in the middle of the prime of his career. He was playing good football. His teammates liked him and more importantly respected him.

Then the Arizona Cardinals — at least briefly — decided he was old.

So the Cardinals drafted linebacker Zaven Collins with the No. 16 overall pick back in April and demoted Hicks, immediately proclaiming that Collins was the future of the defense. No discussion, no hedging, no hesitancy. Done deal.

Even in the what-have-you-done-for-me-lately NFL, it was a puzzling decision. But Hicks didn't pout. He reported to training camp in August, was his usual rock-solid self during practices and as the weeks went by it became pretty obvious that he was still the top option at middle linebacker.

Suddenly, it was mea culpa time for the Cardinals.

“You’re always trying to find the next guy that can come in and be younger and be cheaper. It just is what it is,” Cardinals third-year coach Kliff Kingsbury said. “Jordan handled this the way you would want it. If I had a son, I’d want my son to handle it the way that he did.”

Hicks is now two-thirds of the way through what might be his best NFL season. He leads the team with 95 tackles and has added five sacks. His best performance came last Sunday when he had 13 tackles and two sacks against the Chicago Bears to earn NFC Defensive Player of the Week honors for the first time in his career.

“Personal awards come with team success, right?” Hicks said. “So I look at that game, and honestly, I just made the plays that were coming my way. We did a great job executing.”

Hicks' blend of confidence and humility has been a perfect fit for the Cardinals defense, which has been among the best in the NFL this season.

The Cardinals have the top record in the league at 10-2 and host the Los Angeles Rams (8-4) in an NFC West showdown on Monday night.

There are bigger names than Hicks on the Cardinals defense. Fellow linebacker Chandler Jones is one of them. He's got 105 1/2 sacks, which is more than all but one other active NFL player.

But even he knows who's in charge when the Cardinals are trying to stop the opposing offense.

“Jordan Hicks is the heart of our defense,” Jones said.

Cardinals defensive coordinator Vance Joseph has heaped praise on Hicks all season and views the linebacker as a potential coach one day. Joseph said Hicks sees things the way a coach sees them, understanding everyone's job instead of being solely focused on his own responsibilities.

Hicks isn't sure he wants to be a coach in the future, but he appreciates the compliments.

“I’ve told you guys for three years, what do I do this for? Respect,” Hicks said. “I say it over and over again. That’s all I’m trying to do. That’s it. I’m out here to play well, have these lasting memories and gain that respect.”

Hicks has played so well for the Cardinals that Collins hasn't been on the field much over the past month or two. The rookie's playing time has evaporated over the past several weeks — partly because of a shoulder injury — and he played just three snaps against the Bears last Sunday.

The Cardinals have said they're pleased with Collins' progression and still view him as a future star. Joseph said middle linebacker is a tough position to learn because of the leadership responsibilities, but the rookie has still had good moments.

Hicks has made it clear he doesn't hold any grudges against Collins. He recalled his days as a rookie in Philadelphia in 2015, when veteran DeMeco Ryans helped Hicks learn the ways of the NFL, even though it was clear the Eagles had drafted Hicks to eventually take Ryan's job.

Now Hicks is paying it forward even if he knows Collins will probably be his successor.

“Zaven is an amazing person and going to be a great player in this league,” Hicks said. “I've done everything I can to just continue to build him up, bring him along and teach him what I know.”

But Hicks isn't done just yet. He's relishing the chance to lead these Cardinals, who can clinch a playoff berth for the first time since 2015 if they beat the Rams on Monday.

“It's nice to have personal success,” Hicks said. “But it's better to have team success.”