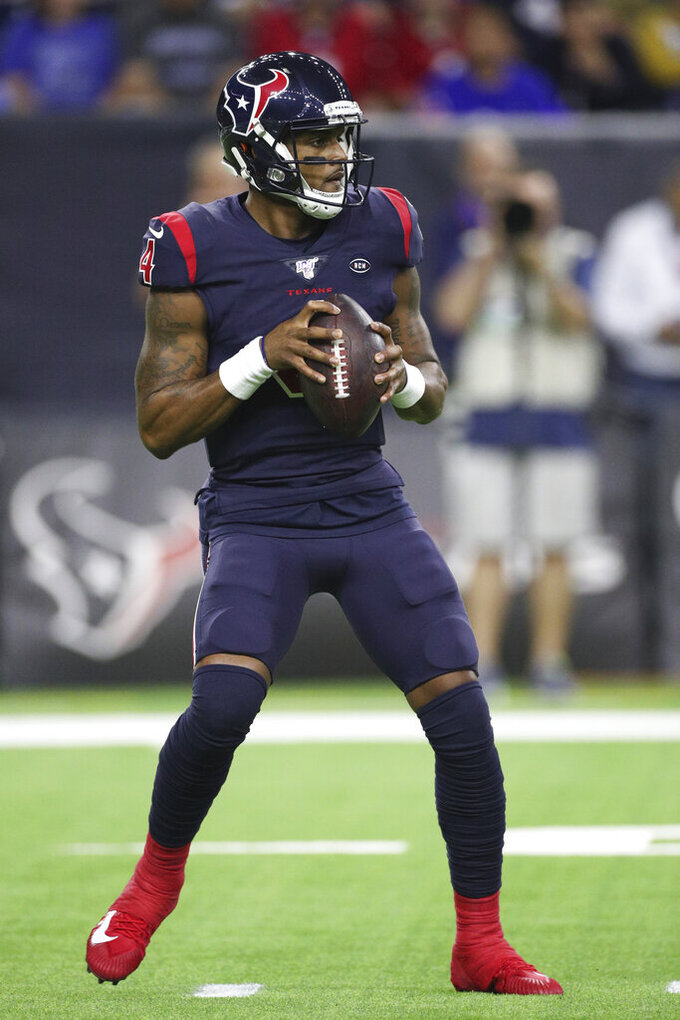 Houston Texans quarterback Deshaun Watson (4) looks downfield for a receiver in an NFL game against the Indianapolis Colts, Thursday, Nov. 21, 2019 in Houston. The Texans defeated the Colts 20-17. (Margaret Bowles via AP)

That includes Texans coach Bill O'Brien, who is 0-4 in his career against his old boss entering Sunday night's game against the Patriots (10-1). O'Brien was asked about his lack of success against Belichick since taking over in Houston in 2014.

"Obviously we've struggled against the Patriots in past years, but this is a different year," he said. "Every year's different. Our team's different, their team's a little bit different, and we just have to go out there on Sunday night and we've got to play a clean game. We've got to play hard, we've got to be competitive for 60 minutes and see what happens."

O'Brien worked in New England from 2007-11 before leaving to take over at Penn State. He said it's difficult to put into words what working with Belichick meant to his career.

"I learned a lot," he said. "I learned a lot about game planning and personnel and strategy. That was a very important time for me in my coaching career. It was probably a place where I learned the most."

Houston's first two meetings against New England with O'Brien in charge were blowouts with the Patriots outscoring the Texans 54-6. Their past two games, which have both come with Deshaun Watson at quarterback, have been much more competitive with both of those games being decided by a touchdown or less.

Belichick raved about Watson and the challenges he presents and said that even if there are only a few seconds left "any game's a long way from being over if he has his hands on the ball." Watson thrives in prime-time games and has 18 touchdowns and just three interceptions in seven night games in his career.

"Deshaun's a very talented player, certainly one of the top players in the league at his position that we've faced," Belichick said. "Does a great job on the deep ball, has very good touch and accuracy, is a good decision maker, obviously very athletic kid that can do a lot."

He'll face perhaps his biggest challenge this season against a New England defense which is allowing the second-fewest yards in the NFL and whose 20 interceptions lead the league. Belichick believes his defense will be tested by the Texans because of the many playmakers they have surrounding Watson, including DeAndre Hopkins, Will Fuller, Kenny Stills and Carlos Hyde.

He recalled Watson's work in Houston's season opener against New Orleans, where the Texans took the lead late before losing on a last-second field goal.

"The two-minute situation against New Orleans, they're down by six points with less than a minute to go and they go 75 (yards) in 14 seconds," he said. "That's the kind of explosive offense that, as a coach, scares you to death."

The Patriots are the lone AFC team that can clinch a playoff berth this week.

The easiest path is with a victory combined with a loss or tie by Pittsburgh or Oakland.

Fuller said that he wants to "strike fear" in defensive backs he lines up against and notices how it impacts those players when he grabs long receptions.

"You can just tell in their body language as the game goes on that they're a little scared," he said.

Fuller, who is averaging 14.4 yards a reception, has 590 yards receiving despite missing three games with a hamstring injury.

"He's made chunk plays for us, touchdowns, and he's a great player," O'Brien said. "And when we get him as a part of our offense it really helps us, and it opens up a lot of different things."

New England has had to make several adjustments on offense this season with key players spending time on injured reserve.

One of the biggest losses was at fullback, when starter James Develin went on IR prior to Week 4 with a neck injury. Rookie Jakob Johnson started three games in Develin's place before he also went on IR with a shoulder injury following the Patriots' Week 6 victory over the Giants.

The Patriots have gotten creative since then, using linebacker Elandon Roberts as needed to block out of the backfield.

Belichick called a block Roberts had late in New England's win over Dallas to help free Sony Michel for a 12-yard run "one of the best blocks we've had all year."

"He's been willing to do whatever he can to help the team win, and he's certainly helped us in that four-minute offense last week," Belichick said. "He's worked hard at it and gotten better at it, so if we get into those situations and we need somebody that can do that, I think he's shown that he's capable of it."