Offensive linemen eager to pick up where Titans left off 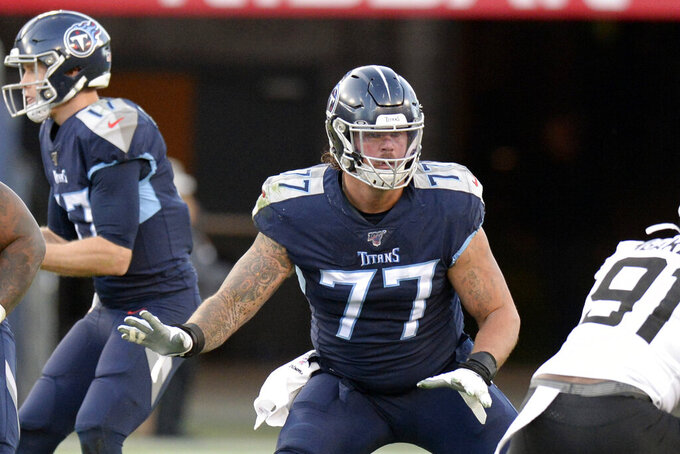 FILE - In this Nov. 24, 2019, file photo, Tennessee Titans offensive tackle Taylor Lewan (77) blocks against the Jacksonville Jaguars in the first half of an NFL football game in Nashville, Tenn. The Titans already are way ahead of where they were a year ago. That’s when they knew Lewan would sit out the first four games. Now the Titans face no suspensions with an offensive line that wants to start this season the way they finished 2019, blowing open holes for NFL rushing leader Derrick Henry.(AP Photo/Mark Zaleski, File)

NASHVILLE, Tenn. (AP) — Rodger Saffold compares what the Tennessee Titans face on the offensive line to riding a bike. The linemen know what to do, and it's time to get back to work.

It's a big difference from this time a year ago.

The Titans spent the 2019 training camp preparing to play the first four games without left tackle Taylor Lewan due to a suspension, while left guard Saffold was getting used to being with a new team and offense. They also were looking for a new right guard, and the lack of work together showed during a 2-4 start.

Now the Titans have everyone available, and the offensive linemen wants to start this season the way they finished 2019 by blowing open big holes for NFL rushing leader Derrick Henry. Safford says it's much easier than a year ago if only because he has more work beside Lewan.

“We get to start off on the right foot from the beginning," Saffold said Friday in a video conference call.

"I know what the coaches want from me. I know what they’re looking for as far as speed wise. And it’s just going to help our entire offensive line all around because now we have a bunch of veterans that know what’s going on with the offense and we can help out the younger guys when they need to come along.”

The Titans return four of five starters from the offensive line that helped Henry run for 1,540 yards and helped protect Ryan Tannehill on his way to a Pro Bowl appearance as the NFL's leader with a 117.5 passer rating.

They do have to replace right tackle Jack Conklin, who left as a free agent for Cleveland. But veteran Dennis Kelly, who filled in for Lewan at left tackle during his suspension last year, is expected to start at right tackle until first-round draft pick Isaiah Wilson earns that job.

Lewan talked during the offseason program of about being a leader on this team. He was their first-round pick at No. 11 overall out of Michigan in 2014 but had his captaincy stripped by then-interim coach Mike Mularkey in November 2015. The Titans made Lewan the highest-paid tackle in the NFL in July 2018.

The now three-time Pro Bowl lineman says the line's continuity and closeness as a unit is huge after the NFL's virtual offseason. Lewan said he can talk to Saffold or center Ben Jones or assistant line coach Keith Carter.

“The closer you are, the more you understand your teammates, and how their personalities work, it’s easier for us to all push the cart in the direction we want to go,” Lewan said. “We want to repeat and do better than we did last year.”

Another advantage for this group is being in the third season of the offense first installed in coach Mike Vrabel's debut season.

“We know the offense,” Lewan said. “You can put up a plan, 95 percent of guys will be able to rattle off the keys of that play, what the scheme is, and everything. But now, it’s about fine tuning those details and I think that’s a really big deal for us being in the third year of this offense.”

Nate Davis is the youngest on this experienced line going into his second season after being a third-round draft pick last year.

Vrabel said this is a group the Titans have a lot of confidence in, especially after how the linemen improved throughout the year. The coach said that was a major part of the Titans' success in reaching the AFC championship game last January.

Their knowledge of the offense means there's room for improvement with quicker recognition of calls and how to adjust to defenses.

“We have to take a mentality and a mindset that you’re going to start back over with the insulation, not going to gloss over anything too quickly," Vrabel said. “But I’m hopeful that the group in there can continue to play at a high level and give us a chance to be successful offensively,”