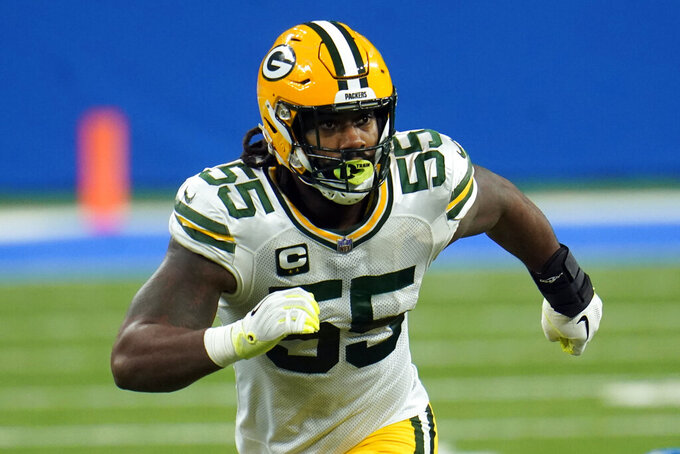 FILE- In this Dec. 13, 2020, file photo, Green Bay Packers outside linebacker Za'Darius Smith (55) plays against the Detroit Lions during the first half of an NFL football game in Detroit. Smith is practicing again and could return for the playoffs after missing nearly the entire regular season. (AP Photo/Paul Sancya, File)

GREEN BAY, Wis. (AP) — The Green Bay Packers have boosted their pass rush for the postseason by activating outside linebackers Za’Darius Smith and Whitney Mercilus from injured reserve.

These moves clear the way for Smith to play his first game in over four months and Mercilus to suit up for the first time since mid-November when the top-seeded Packers (13-4) host the San Francisco 49ers (11-7) in an NFC divisional playoff game Saturday night.

Green Bay made room for them on the roster by releasing defensive lineman Jack Heflin and cornerback Isaac Yiadom.

Smith, 29, had a combined 26 sacks for the Packers from 2019-20 but hasn’t played since a 38-3 season-opening loss to the New Orleans Saints due to a back injury that also sidelined him for virtually the entire preseason. Smith reached the Pro Bowl in 2019 and 2020. He also was a second-team All-Pro selection in 2020.

Mercilus, 31, joined the Packers on Oct. 21 after the Houston Texans released him. He had one sack – the 58th of his career - in four games with Green Bay before a Nov. 14 biceps injury sidelined him for the rest of the season.

Smith and Mercilus should provide reinforcements at a position where the Packers have relied heavily on Rashan Gary and Preston Smith this season.

Gary, a 2019 first-round draft pick from Michigan, has 9 ½ sacks this season after totaling seven in his first two NFL campaigns. Preston Smith, who isn’t related to Za’Darius, improved his sacks total from four in 2020 to nine this season.