Packers get second shot at Bucs with Super Bowl at stake 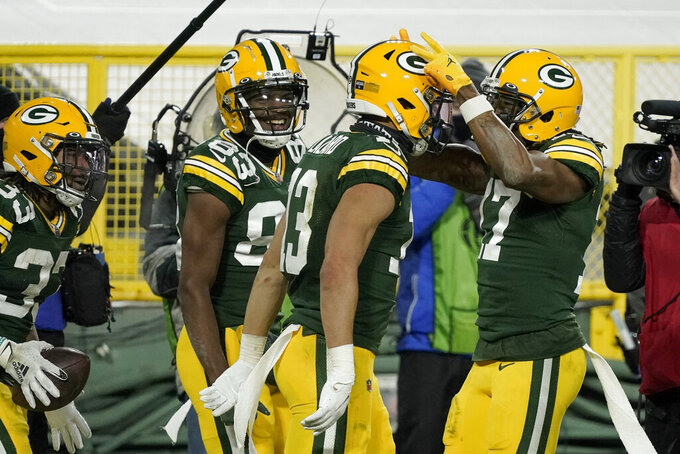 Green Bay Packers' Allen Lazard (13) is congratulated by teammates after scoring on a 58-yard touchdown run during the second half of an NFL divisional playoff football game Saturday, Jan. 16, 2021, in Green Bay, Wis. (AP Photo/Morry Gash)

GREEN BAY, Wis. (AP) — All that stands between Green Bay and its first Super Bowl berth in a decade is the one team that managed to shut down the Packers’ high-powered offense this season.

Green Bay is the NFL’s highest-scoring team but had its lowest point total of the season in a 38-10 loss at Tampa Bay back on Oct. 18. The Packers (14-3) have a chance to avenge that defeat Sunday when they host the Buccaneers (13-5) in the NFC championship game.

“I think our team has come a long way from that day, but everything’s just words at this point,” Packers coach Matt LaFleur said Monday. “You’ve got to go out there and you’ve got to have a great week of preparation and you’ve got to go earn it on the field. So that’ll be our mindset and that’s how we’ll approach it.

Aside from some second-half struggles in a loss to Indianapolis and a win over Carolina, the Packers’ offense has been pretty much unstoppable since the Tampa Bay game. That didn’t change Saturday in a 32-18 divisional playoff victory over the Los Angeles Rams, who entered the night leading the NFL in most defensive categories.

The Packers earned their seventh straight victory and followed their usual winning formula: They build big leads by scoring at will early on.

“I think it’s one of the greatest honors of my life to be able to lead this team,” Rodgers said after the game. “To be counted on by my teammates to bring, not just my physical play, but my presence, my emotions, my words, and I strongly believe in speaking things to life. We’ve been talking a lot about how a positive wave can be so powerful. I feel like we have that wave building and building and building and it’s kind of been backboned by so many great people.”

The Packers also started out well in their first meeting with Tampa Bay, as they built a 10-0 lead before Rodgers threw consecutive interceptions. One was a pick-6 The other was returned to the 2-yard line to set up a touchdown.

Rodgers was 16 of 35 for 160 yards as the Packers gave up 38 straight points after taking that 10-0 lead. Now they get another shot at the Bucs with a Super Bowl appearance at stake.

“What’s happened in the past at this point, it really doesn’t matter,” LaFleur said. “It’s about what we do moving forward.”

The offensive line continues to thrive even after losing All-Pro left tackle David Bakhtiari to a season-ending knee injury on Dec. 31. The Packers didn’t allow a single sack to the Rams, who had 53 sacks during the regular season and five more in a playoff victory at Seattle. … The Packers rushed for 188 yards, the most the Rams had allowed all season. … Green Bay’s pass rush produced four sacks. … The Packers didn’t commit any turnovers Saturday and have just two turnovers during their seven-game winning streak.

The Packers still seem to have at least one special-teams breakdown in just about every game.

DT Kenny Clark and OLB Rashan Gary each had 1 ½ sacks. … Aaron Jones ran for 99 yards and had one 60-yard burst against a Rams defense that hadn’t allowed a run from scrimmage of longer than 27 yards.

There wasn’t much to complain about, though Hunter Bradley had a bad snap on an extra-point attempt in the second quarter. JK Scott leaned to his right to catch the snap, but he then decided to flip the ball to kicker Mason Crosby rather than allowing Crosby to kick it.

LB Krys Barnes injured his thumb early in the game but returned and finished with a team-high 10 tackles. RB A.J. Dillon hurt his quadriceps late in the game.

1,487 —The Packers have scored 1,487 postseason points in NFL history. They have overtaken the Pittsburgh Steelers (1,478) for the lead in that category.

A home victory over Tampa Bay would enable the Packers to head to Tampa for the Super Bowl on Feb. 7.