Packers playing better when they're away from Lambeau Field 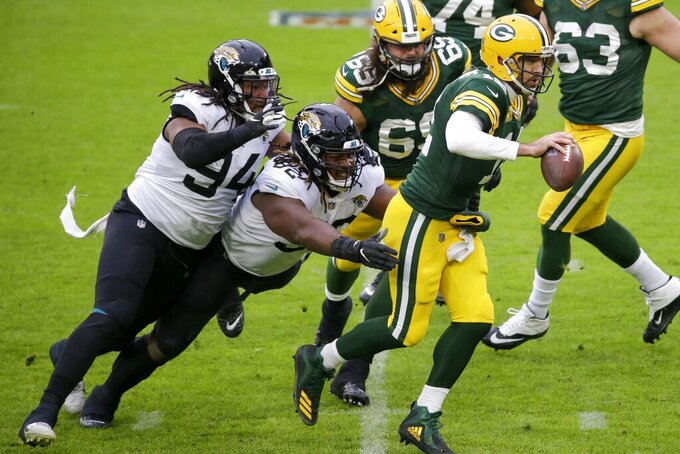 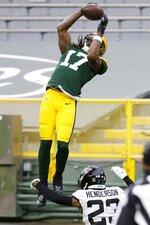 GREEN BAY, Wis. (AP) — The Green Bay Packers are on pace to have home-field advantage throughout the NFC playoffs.

How much of an advantage that would be remains uncertain.

Green Bay delivered its second straight sluggish home performance Sunday before escaping with a 24-20 victory over the Jacksonville Jaguars, who have lost eight straight games. Two weeks earlier, the Packers fell 28-22 at home to the Minnesota Vikings.

Packers coach Matt LaFleur said after the victory over Jacksonville that his team needed to show more fire and pointed out this problem has been more apparent at home than on the road. He tempered those remarks Monday and said he didn’t know if the energy level was as bad as he made it out to be, though he acknowledged it still needed improvement.

“I really think a lot of our issues stem from lack of execution,” LaFleur said. “Because if you look back and once you, again, get a chance to reflect and think about the week, I do think that our guys were having fun. I thought they were into it throughout the course of the week, bringing great energy, positive energy. And that’s what we need. We’ve got to continue to do that and at the same time still be critical and be real with yourself in terms of, ‘What do we have to work on?’"

In their last two road games, the Packers breezed to a 35-20 victory at Houston and a 34-17 triumph at San Francisco. The Packers are 4-1 on the road and 3-1 at Lambeau Field this season.

Green Bay (7-2) shares the NFC’s best record with the New Orleans Saints. The Packers would have the edge in a tiebreaker with the Saints after winning 37-30 at New Orleans on Sept. 27.

Defensive tackle Kenny Clark couldn’t pinpoint why the Packers haven’t looked as sharp at home as on the road.

“It’s something that we’ve got to get fixed,” Clark said Monday. “We’ve got to be more consistent.”

Clark wondered if the absence of fans at Lambeau Field has played a role.

Green Bay has played in front of small crowds at selected road games. For instance, the game at Houston had an announced attendance of 12,618 that included a vocal contingent of Packers fans.

LaFleur said players may be accustomed to anticipating crowd support at home games, whereas they don’t expect that boost when they’re on the road. But it’s worth noting that the Packers beat Detroit and Atlanta convincingly in their first two home games even without any fans in the stands.

“We’ve got to do a good job of just making sure that it doesn’t matter where we play, our standards and our expectations and our energy is consistent, the same, whether we’re home or away,” LaFleur said.

Green Bay’s defense made big plays when it mattered. The Packers produced back-to-back sacks when Jacksonville got into Green Bay territory on its final drive. Adrian Amos had an interception that led to a field goal late in the first half. … The offensive line allowed just one sack. The Packers have given up more than one sack in just one game all season.

The Packers rushed for only 80 yards and gained 3.2 yards per carry. The Packers failed to convert a third-and-1 situation when they were trying to run out the clock. … Green Bay had committed just three turnovers all season before Sunday, but the Jaguars scored 10 points off a pair of takeaways in the second half. … The Packers allowed a touchdown on Keelan Cole’s 91-yard punt return.

Marquez Valdes-Scantling had four catches for a career-high 149 yards, including a 78-yard touchdown. … Rashan Gary and Preston Smith helped seal the victory by delivering sacks on Jacksonville’s last possession.

JK Scott had a 30-yard punt late in the fourth quarter that allowed Jacksonville to begin its final drive at its own 47-yard line. … Offensive tackle Billy Turner was called for two penalties, including one that nullified a touchdown on a drive that ended with a field goal. … Aaron Jones ran for just 46 yards on 13 carries, though he also had five catches for 49 yards.

Running back/kick returner Tyler Ervin left with a rib injury in the first half.

70 – Aaron Rodgers’ 78-yard touchdown pass to Valdes-Scantling was his 19th career TD toss of 70-plus yards. That matches New Orleans’ Drew Brees for the highest total of TD passes of 70-plus yards by any player in NFL history.

The Packers play at Indianapolis on Sunday before returning home the following week to host the Chicago Bears.