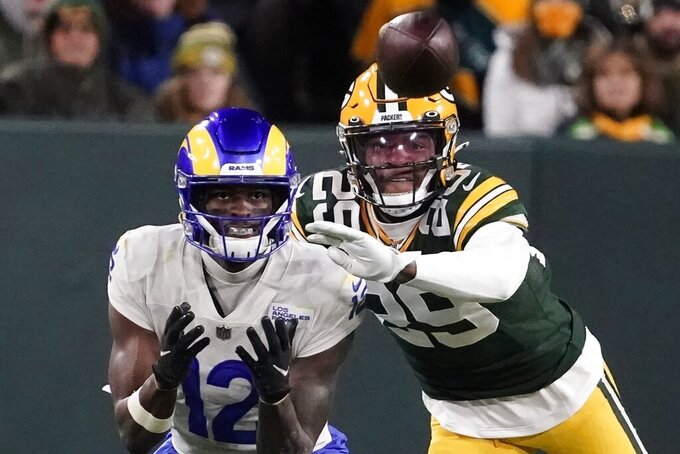 OPENING LINE: Packers by 11 ½, according to FanDuel Sportsbook.

TURNOVER DIFFERENTIAL: Bears minus-8; Packers plus-9.

BEARS PLAYER TO WATCH: QB Justin Fields. The prized rookie is set to return after missing two games because of broken ribs. Before getting hurt, the former Ohio State star looked like he was emerging as the threat the Bears envisioned when they traded up to draft him with the No. 11 overall pick. In a loss to San Francisco, he threw for 175 yards and a touchdown. He also ran for 103 yards and a score, becoming the first Bears QB to rush for 100 yards in a game since Bobby Douglass in 1973. The following week in a Monday night loss at Pittsburgh, he passed for 291 yards.

PACKERS PLAYER TO WATCH: QB Aaron Rodgers. The reigning MVP yelled “I still own you!” at the Soldier Field crowd after his fourth-quarter touchdown run against the Bears back in October. It’s hard to argue with him. The Packers have gone 22-5 against the Bears in games Rodgers has started. In one of the five losses, Rodgers left with an injury after the Packers’ opening series.

KEY MATCHUP: Green Bay offensive line vs. Chicago pass rush. Yosh Nijman will be making his fifth career start at left tackle as Green Bay plays without David Bakhtiari and Elgton Jenkins due to knee injuries. Green Bay also is missing center Josh Myers, who hasn’t played since suffering a knee injury early in the Packers’ victory at Chicago. The Packers should win this game as long as Rodgers isn’t facing constant pressure from the likes of Robert Quinn and Roquan Smith.

KEY INJURIES: Bears QB Andy Dalton, who started Chicago’s past two games, injured his left (non-throwing) hand against Arizona. If he’s unavailable, Nick Foles would be the backup. ... WR Allen Robinson (hamstring) and DT Akiem Hicks (ankle) have missed the past three games. ... LB Khalil Mack (foot) is out for the remainder of the season after playing seven games. … Packers CB Jaire Alexander (shoulder) has missed eight games and remains on injured reserve but returned to practice this week. … Packers OLB Za’Darius Smith (back) and Myers (knee) also are on injured reserve but are hoping to return later this season. … Jenkins and TE Robert Tonyan have suffered season-ending knee injuries. … Bakhtiari still hasn’t played since tearing the anterior cruciate ligament in his left knee on Dec. 31. … Rodgers has a toe injury that has limited his practice time, though he continues to play … WR/KR Malik Taylor (abdomen) has missed Green Bay’s last two games but is practicing this week. … Green Bay CB Kevin King (hip/knee) also has practiced this week after missing the last game. … Packers backup QB Jordan Love is on the reserve/COVID-19 list. ... LB De'Vondre Campbell went on the reserve/COVID-19 list last week but could return in time to play Sunday. ... Packers WR Randall Cobb will miss the game due to a core injury.

SERIES NOTES: The NFL’s oldest rivalry has been rather one-sided lately. The Packers have won 20 of the last 23 matchups between these teams and owns a five-game winning streak in the series. Over those last five matchups, the Bears have 10 turnovers and the Packers have just one. This marks the 10th time in the last 11 years that the Packers-Bears game at Lambeau Field has taken place during prime time.

STATS AND STUFF: Bears RB David Montgomery should play Sunday after a knee injury sidelined him for Chicago’s October loss to the Packers. Montgomery now is healthy again and is coming off a productive performance against Arizona, running for 90 yards and a touchdown and catching eight passes for 51 yards. … The Bears have dropped six of seven. ... Chicago ranks third in the NFL with 33 sacks. ... Quinn is tied for fourth in the league with 12 sacks. The franchise record is 17 1/2 by Hall of Famer Richard Dent in 1984. ... WR Darnell Mooney leads the Bears in receptions (51) and yards receiving (721). ... Rodgers has a career 105.9 passer rating against the Bears. That’s the highest rating against the Bears by any quarterback who has thrown at least 300 passes against Chicago, according to StatsPass. … Packers OLB Rashan Gary has five sacks over his last five games. … Packers CB Rasul Douglas had a pick-6 and four passes defended in the victory over the Rams. The performance earned him NFC defensive player of the week honors. … Former NFL Commissioner Paul Tagliabue will be honored during a halftime ceremony recognizing his induction into the Pro Football Hall of Fame.

FANTASY TIP: Douglas’ pick-6 was one of three turnovers that Green Bay forced in its last game. Given the Packers’ recent penchant for producing takeaways and the Bears’ tendency to cough up the ball, it might be worth taking a chance on Green Bay’s defense this week.