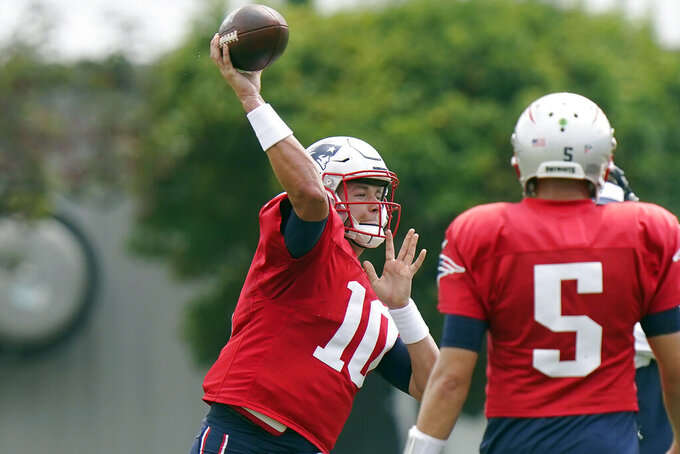 OPENING LINE: Patriots by 3 1/2, according to FanDuel SportsBook

PATRIOTS PLAYER TO WATCH: Rookie QB Mac Jones went 29 for 39 for 281 yards and a touchdown in his NFL debut while facing pressure constantly.

JETS PLAYER TO WATCH: Similar to his counterpart on the Patriots, Jets rookie QB Zach Wilson was pressured all game while being sacked six times — but finished 20 of 37 for 258 yards and two TDs with an interception.

SERIES NOTES: The rivalry between the AFC East foes has been overwhelmingly lopsided lately, with the Patriots having won the past 10 meetings. The most recent time the Jets won was a 26-20 overtime win in Week 16 of the 2015 season, when Todd Bowles was coach, Ryan Fitzpatrick was quarterback and Brandon Marshall and Eric Decker were the top wide receivers. Yep, a long time ago. ... The Patriots have 21 season series sweeps against the Jets, including 12 under coach Bill Belichick and five straight overall. ... New England's 69 overall victories vs. New York are the franchise's second most over any team, with only 76 against Buffalo more.

STATS AND STUFF: Belichick has a proven track record against rookie QBs, going 21-6 against them since taking over in New England in 2000. ... RB Damien Harris ran for 100 yards on 23 carries last Sunday, but lost a fumble in the red zone and spoiled the Patriots' comeback bid against Miami. Harris will be bidding to become the first New England player to rush for 100 yards in consecutive games since LeGarrette Blount in 2016. ... Jones spread the ball around in his debut, completing passes to eight players — with RB James White and WR Jakobi Meyers leading the way with six receptions each. ... Jones was the first rookie QB to start Week 1 for the Patriots since Drew Bledsoe in 1993. ... New England has scored in the first half of 87 straight overall games, an NFL record. ... The game marks the first for the Jets at MetLife Stadium with fans in attendance in nearly 21 months, going back to the home finale against Pittsburgh on Dec. 22, 2019. ... New York started seven rookies in its opener at Carolina: Wilson, LG Alijah Vera-Tucker, WR Elijah Moore, LB Hamsah Nasirildeen, LB Jamien Sherwood, CB Brandin Echols and K Matt Ammendola. ... The Jets allowed former QB Sam Darnold to throw for 279 yards and a touchdown, along with a TD run, against them in the opener. ... WR Corey Davis had five catches for 97 yards and two TDs in his Jets debut. The 97 yards receiving are fourth most by a player in his Jets debut, behind only Don Maynard (116, 1960), Rob Carpenter (109, 1992) and Jamison Crowder (99, 2019). ... Ammendola averaged 48.5 yards on six punts after filling in for the injured Mann, despite having never previously punted in a game at any level. The Jets signed veteran Thomas Morstead to handle the punting duties this week. ... New York also signed LB B.J. Goodson, who played last year in Cleveland, to help overcome some injuries at LB.

FANTASY TIP: Patriots TEs Jonnu Smith and Hunter Henry should be started without hesitation. While they might be in a timeshare — Smith caught all five of his targets last week for 42 yards, Henry all three of his for 31 yards — it's clear both will be a big part of New England's game plan. And they'll face a Jets banged-up safety group.