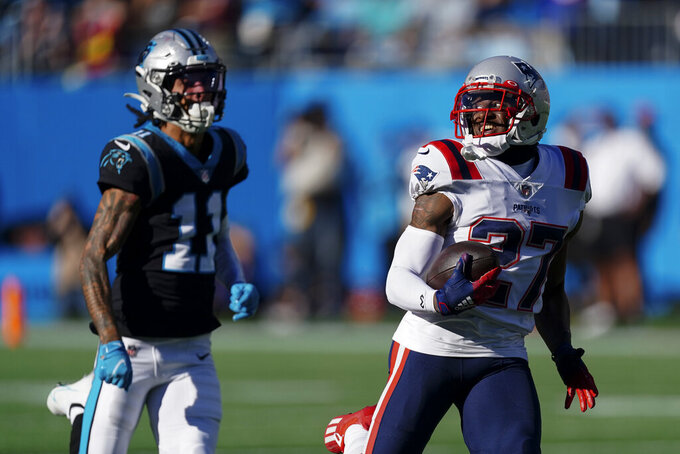 New England Patriots cornerback J.C. Jackson runs for a touchdown after an interception against the Carolina Panthers during the second half of an NFL football game Sunday, Nov. 7, 2021, in Charlotte, N.C.(AP Photo/John Bazemore)

BROWNS PLAYER TO WATCH: WR Donovan Peoples-Jones could be on the verge of a big breakout. With Odell Beckham Jr.'s release, the second-year wideout may be Cleveland's new deep threat. He returned from a groin injury after missing two games last week and hauled in a 60-yard, quick-strike TD.

KEY MATCHUP: Mayfield vs. CB J.C. Jackson. Mayfield is coming off his best game of the season, throwing a pair of TD passes in the Browns' blowout win over Cincinnati. He's also taking care of the ball with just three interceptions. He'll be facing a bona fide ballhawk in Jackson, who had two picks in the Patriots' win at Carolina last week and leads New England with five INTs on the season. His 22 INTs since his rookie season in 2018 are the most in the NFL over that time span.

KEY INJURIES: Browns star RB Nick Chubb will miss the game after being placed on the reserve/COVID 19 list earlier this week. ... Starting RT Jack Conklin will miss his second straight game with a dislocated elbow that could sideline him longer than the three-game minimum on injured reserve. ... Browns DE Takk McKinley (groin) is out. ... B Greedy Williams (shoulder) last week aggravated an injury that kept him out all of 2020. ... RB Kareem Hunt (calf) will miss his fourth game in a row. ... Browns rookie LB Jeremiah Owusu-Koramoah (ankle) could play after missing the past three games. ... The Patriots began the week with RBs Damien Harris and Rhamondre Stevenson both in the concussion protocol, along with PR/KR Gunner Olszewski. Harris and Stevenson together have accounted for 71% of New England's rushing yards and 8 of 11 rushing TDs.

SERIES NOTES: The Browns won nine of the first 11 games, but are just 2-8 against the Patriots since returning to the NFL as an expansion team in 1999. Cleveland has lost three in a row to New England and hasn't beaten Bill Belichick's squad since 2010. Belichick coached the Browns from 1991-95. Cleveland’s lead in the all-time series includes the one postseason game when the Belichick-led Browns claimed a 20-13 wild-card playoff victory over the Patriots on New Year’s Day in 1995.

STATS AND STUFF: The Browns left the Beckham drama in their dust last week with a dominant performance at Cincinnati. It came on the heels of Beckham's distractions, which resulted in the wide receiver's release. ... Mayfield finished 14 of 21 for 218 yards and two TD passes last week, with a season-high 132.6 rating. He's been playing with a torn labrum and fracture in his left shoulder. ... The Browns rank first in the league in rushing yardage (1,442), average per attempt (5.3 yards) and touchdowns (16). ... With Chubb is out, D'Ernest Johnson will start. He ran for a career-best 146 yards and a TD in his first start against Denver on Oct. 21. ... Cleveland's defense forced three turnovers last week after coming in with just five in the first eight games. CB Denzel Ward's 99-yard TD interception return opened the scoring and set the tone for the Browns' blowout. ... The Browns made $104 million worth of investments into their offensive line this week, signing three-time Pro Bowl left guard Joel Bitonio to a three-year, $48 million extension and giving right guard Wyatt Teller a four-year, $56.2 million deal. ... Browns DE Myles Garrett leads the league with 12 sacks. He's just 1 1/2 from matching his career high and just two from the team single-season record (Reggie Camp, 14 in 1984). ... Sunday marks the 1,000th game in Patriots franchise history. They will become the first original AFL team to reach that milestone. ... The Patriots have returned interceptions for touchdowns in each of their last two games. The only time the Patriots had a pick-6 in three straight games was 1998. The last NFL team with a pick-6 in three consecutive games was the Chicago Bears in 2012. ... QB Mac Jones has completed at least 70% of his passes in five of his first nine games, the only rookie quarterback to do so. The rookie record is nine such games by Dallas' Dak Prescott. ... Jones leads all rookie QBs in passing yards (2,135), completions (204), completion percentage (68) and TD passes (10). ... Harris has scored a rushing TD in five straight games. The team record is seven by Curtis Martin in 1996. ... WR Jakobi Meyers is one of four receivers in the AFC with four or more catches in eight games this season. He's caught five or more passes in six consecutive home games. ... K Nick Folk leads the NFL with 21 field goals. ... The Patriots have scored in the first half in 95 consecutive games (regular season and playoffs), an NFL record.

FANTASY TIP: Peoples-Jones has only 15 catches, but three are for touchdowns and he's averaging 20.9 yards per reception. With his role expected to expand, he'll get more scoring opportunities.