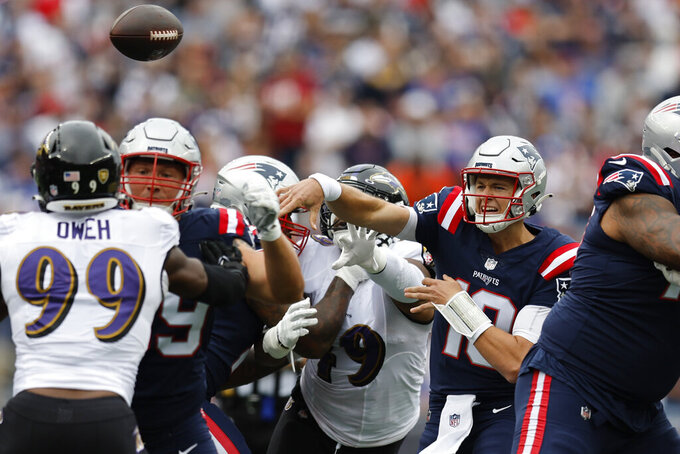 His third interception sealed the Patriots’ 37-26 loss to the Baltimore Ravens on Sunday.

The injury could doom the rest of their season.

The second-year signal-caller and heir to Tom Brady as the Patriots quarterback, Jones left the game in the fourth quarter in obvious pain and needed to be helped to the locker room. He was not available to reporters because of what the team said was a leg injury.

”Mac is a hell of a quarterback,” Patriots linebacker Matthew Judon said. “We don’t know what happened. I’m riding with (No.) 10. We have to play in the parking lot, we play at Gillette (Stadium), whatever. I’m riding with him.”

Jones completed 22 of 32 passes for 321 yards, and he also made like Ravens quarterback Lamar Jackson by scampering for a 3-yard score — his first career rushing touchdown. But Jones, who has never missed a start, has now left back-to-back games with injuries, and this one appeared serious.

Jones was picked off in third quarter, on the second play after Jackson hit Devin Duvernay for a 4-yard touchdown that gave the Ravens a 28-0 lead. He was intercepted again with nine minutes left in the fourth, overthrowing DeVante Parker in the end zone when trailing 31-26 after New England drove to the Baltimore 10.

But the one that could linger was at the 2-minute warning, when Ravens lineman Calais Campbell brought Jones down in the backfield just as he unloaded the ball toward Kendrick Bourne. Marcus Peters came down with the ball, and the 307-pound Campbell came down on Jones’ left leg.

Jones grimaced in pain, reached for his ankle and then pulled himself up on one leg before hopping off the field and heading to the locker room. Photos of him heading down the stairs, with someone under each arm to help him, also showed him in what appeared to be extreme pain.

“Just trying to get pressure on him. Hit him. Make him uncomfortable,” Campbell said. “I hate to see him get hurt. That’s the worst part of the game. I hope he is OK.”

Coach Bill Belichick said he had no information on the injury. Patriots spokesman Stacey James confirmed that Jones had a leg injury and would not be available. While reporters waited near Jones' locker, a team employee came and gathered his things.

Jones also left last week's game, a 17-14 victory over Pittsburgh, with a back injury.

“Playing quarterback in this league, you take some hits. It’s tough,” defensive back Devin McCourty said. “I know if he has something he can go and play with, he’s going to play with it. ... I think we’ll continue to rally around him.”

The Patriots have 36-year-old Brian Hoyer as their backup, with rookie Bailey Zappe as their No. 3 quarterback. Hoyer has played for seven teams in 14 seasons — including three stints with New England — almost all of it as a backup.

The Patriots committed four turnovers in the second half, with Nelson Agholor fumbling the ball away after a reception in the fourth quarter when they trailed 31-26. New England turned the ball over on its last three possessions.

“You’re not going to win turning the ball over in the fourth quarter,” Belichick said. “You’re behind, you got to be aggressive. But still on those, we got to do a better job than we did on those plays, for sure.”