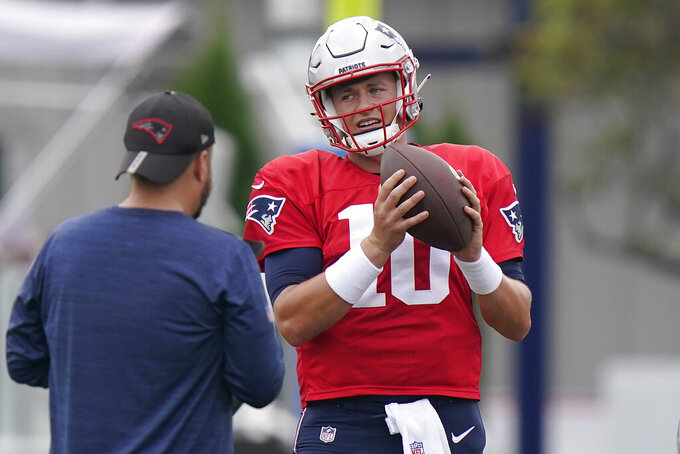 FOXBOROUGH, Mass. (AP) — Mac Jones is going to be tested by opposing defenses this season. That’s just the way life goes for rookie quarterbacks in the NFL.

It’s a reality not lost on members of the Patriots’ offensive line.

“As a rookie, obviously you have a lot on your plate,” left guard Mike Onwenu said. “Everybody is going to try to take a stab at a rookie.”

It didn’t take long for Jones to find that out in New England’s season-opening loss to the Miami Dolphins.

The Dolphins' defense tried its best to push him into poor decisions all game, forcing him to fumble on the game’s opening drive and blitzing him 21 times.

Only Dallas’ Dak Prescott was blitzed more often (33), and only Tennessee’s Ryan Tannehill (12) and the Jets’ Zach Wilson (10) took more than the nine hits Jones did last week.

It’s put the Patriots’ offensive line in the spotlight as it prepares to visit a Jets team expected to be just as aggressive under new coach Robert Saleh.

Seeing Jones hit so much in the opener didn’t sit well with the Patriots' O-line.

“We just gotta be better. We put it on ourselves. Obviously, it’s us blocking,” Onwenu said. “It just pushes us to be better and do better.”

The Jets came up short in a 19-14 loss to Carolina in their opener, but their defense also tried its best to make things difficult for Panthers quarterback Sam Darnold.

For the game, the Jets pressured their former quarterback on 33% of his drop-backs, tallied 12 pressures and hit him seven times.

Patriots coach Bill Belichick said he sees some similarities between the Jets’ defensive scheme and the one Saleh ran as defensive coordinator of the 49ers. Key members of Saleh’s coaching staff have San Francisco ties.

New England will be preparing for New York possibly without starting right tackle Trent Brown, who left the opener with a right calf injury. He was replaced by Justin Herron, who played 46 snaps over the next three quarters. Yasir Durant later came on in place of Herron, taking 23 snaps.

If Brown can’t go this week, another option could be to put Onwenu there. He started all 16 games at right tackle last season before moving over to left guard this season following Joe Thuney’s departure in free agency.

Onwenu said he hasn’t taken any snaps at right tackle in his second year, but added he is prepared to play where he’s needed.

“I think you do whatever you can to prepare any position,” Onwenu said. “Just like I know I can be at right guard. Just taking the steps and having the mindset of knowing everything or every position.”

Belichick hasn’t ruled out the possibility of shifting Onwenu to his old position.

“We always talk about all of our options, and ultimately, we try to do what’s best for the team. I don’t think that’ll change,” Belichick said.