Plagued by poor finishes, Texans are NFL's only winless team 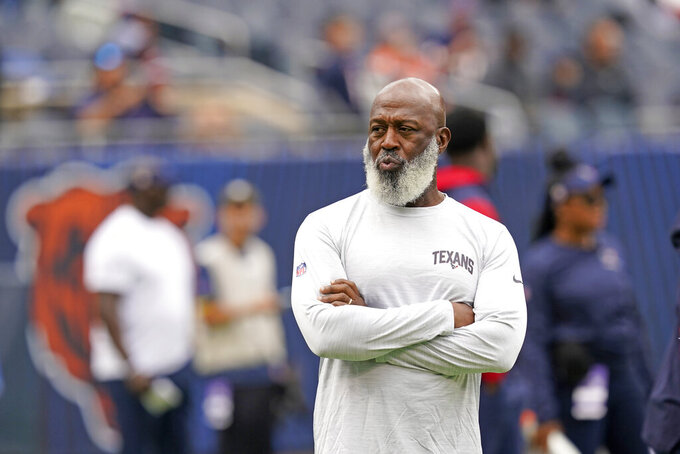 HOUSTON (AP) — The Houston Texans have had chances to win every game they've played, but they've yet to put together a complete performance.

It adds up to them being the NFL's only winless team.

Houston (0-3-1) started fast in each of its first three games but couldn't finish. Then, on Sunday against the Los Angeles Chargers, the Texans trailed by 20 at halftime before scoring 17 straight points to get within a field goal in the fourth quarter.

The defense couldn’t get a stop after that with the Chargers adding a touchdown to seal the 34-24 victory.

The Texans allowed the Chargers to pile up 419 yards Sunday. They've given up big plays week after the week and rank 29th in the league in yards allowed.

“Whenever you see a guy wide open like that, there’s a breakdown in communication,” Smith said. “On two of those plays and that long run, it’s really disappointing that happened. I felt like we were in a position where that shouldn’t happen, but it did.”

Rookie Dameon Pierce has Houston’s running game looking better than it has in years. The fourth-round pick from Florida had a career-high 131 yards rushing, highlighted by a 75-yard TD run Sunday.

“He’s a guy that we need to continue to feature,” Smith said.

Quarterback Davis Mills continued to struggle Sunday, throwing two interceptions for the second straight week. His first one came on the third play of the game and led to the first touchdown by Los Angeles.

He played better in the second half but couldn’t get the Texans in the end zone after they recovered a fumble on the Chargers 16 in the fourth quarter. He was sacked and fumbled on second down on that drive. The Texans recovered his fumble, but he threw an incompletion on third down that forced the team to settle for a field goal.

“We just have to find ways in those situations to execute at our jobs,” Mills said. “One little slip-up can end a drive, so we just have to make sure all 11 people out there on the field are doing their jobs every play.”

Smith knows Mills needs to improve, but he was quick to point out that the passing game is far from the team's only shortcoming.

“We’re not where we need to be in our passing game, just like we aren’t in anything else,” Smith said.

Pierce has improved each week and should continue to be a focal point of Houston’s offense. He is the third Texans rookie to rush for 130 yards or more in a game and his 75-yard TD was the third-longest run in franchise history.

In his second season, Mills doesn’t seem to be progressing and has failed week after week to close out games when Houston has had chances late.

Smith bristled when asked Monday if the team had considered benching Mills.

“We’re not making a change at the quarterback position. ... Davis Mills, he’s our quarterback,” Smith said.

LB Blake Cashman is in the concussion protocol after a head injury Sunday. Third overall pick Derek Stingley bruised his arm against the Chargers but returned to the game and said he was OK afterward.

42 – Tackles by safety Jonathan Owens, which ranks fifth in the NFL.

Mills and the Texans will need to clean up their miscues and find a way to finish if they hope to win at Jacksonville (2-2) on Sunday.