Playoff-bound Seahawks have path to top seed in NFC 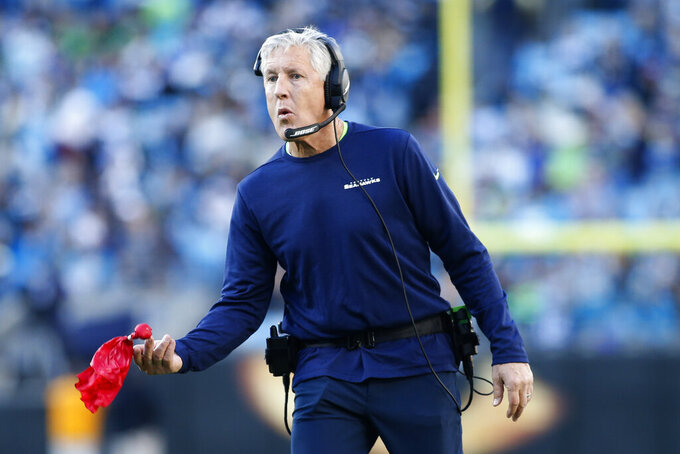 Seattle Seahawks head coach Pete Carroll tosses the red flag to challenge a play during the second half of an NFL football game against the Carolina Panthers in Charlotte, N.C., Sunday, Dec. 15, 2019. (AP Photo/Brian Blanco)

RENTON, Wash. (AP) — This group of Seattle Seahawks won’t forget sitting on the tarmac in Charlotte, North Carolina, waiting to take off.

Gathered around a cellphone on Sunday evening, the Seahawks watched as they not only clinched a playoff berth for the eighth time in the past 10 seasons thanks to the loss by the Los Angeles Rams, but took over the No. 1 seed in the NFC.

It was a perfect cap to a day when the Seahawks (11-3) finished off the best road record in franchise history at 7-1 with their 30-24 win over the Panthers.

“It was a blast. It was really fun,” Seattle coach Pete Carroll said. “It had already been announced that the Rams were falling. It was a really cool moment for the team and they had a lot of fun with it. It was the kind of ride home you like.”

Seattle has two home games left and a straight line to a bye in the playoffs at the very least. Win their final two and the Seahawks will be NFC West champs and at worst the No. 2 seed. Finish in a three-way tie with New Orleans and Green Bay, or just a head-to-head tie with the Packers, and the NFC playoffs will go through Seattle.

Almost everything is in Seattle’s control, just the way Carroll wants.

“To come out of it where we are right now and be one of the highest NFC seeds, after all that’s happened so far, that’s a good accomplishment for us,” Carroll said.

So much for the loss of Seattle’s 1-2 punch in its offensive backfield. Chris Carson was more than willing to take on the running load against the Panthers. Carson rushed for 133 yards and two touchdowns, and averaged 5.5 yards per carry. Seattle had eased off Carson the past few weeks as Rashaad Penny took a bigger role in the offense. But Penny suffered a season-ending knee injury last week against the Rams. Seattle did give a few carries to C.J. Prosise and Travis Homer, but Carson was the undisputed feature back with 25 touches.

Seattle has won 10 one-score games this season, the most by any team since the 1978 Houston Oilers. The margin over the Panthers should have been greater. Seattle has a troubling trend of playing soft defensively in the fourth quarter and letting an opponent make the final few minutes unnerving. It happened earlier this season against Pittsburgh, Atlanta, Minnesota and Philadelphia. And it happened against the Panthers. Carroll indicated that was somewhat by design with the number of injuries on Seattle’s defense and the inexperience on the field in the fourth quarter. Still, a less dramatic fourth quarter would be welcome.

After a month of dealing with a severe leg bruise and an illness that robbed Tyler Lockett of 10 pounds he probably needs, the Seahawks' top receiver was back to being a major downfield threat against the Panthers. Lockett had eight catches for 120 yards and a touchdown. He had eight catches for 107 yards in his previous four games combined.

It can’t get much more down than WR Josh Gordon, who was suspended indefinitely by the NFL on Monday for violating league policies on performance enhancers and substances of abuse. It’s the eighth time in his career Gordon has been suspended either by the league or by his team. Gordon had just seven catches over five games with Seattle, including a remarkable fingertip catch from Wilson for 58 yards on Sunday. He likely finished his Seattle tenure with 139 yards receiving and no touchdowns.

There are plenty of injury concerns on the defensive side. Safety Quandre Diggs is at the top of the list with a high ankle sprain that knocked him out of Sunday’s win and had him leaving the field in a walking boot. The arrival of Diggs at midseason helped solidify Seattle’s defense, and the Seahawks will hope to have him back for Week 17 against San Francisco.

Carroll said linebacker Bobby Wagner intends to play through his sprained ankle. Cornerback Shaquill Griffin's playing status will likely be a late-week decision because of a hamstring injury, while Carroll is hopeful linebacker Mychal Kendricks will be able to return from his hamstring injury after missing the past two games.

On the defensive line, both Jadeveon Clowney (illness) and Ziggy Ansah (shoulder) should be able to return this week, Carroll said.

Seattle rolled to a 17-point victory at Arizona in Week 4, its only comfortable win of the season. The Seahawks were able to keep Kyler Murray in check and got a key defensive touchdown from Clowney. Arizona has been a late-season problem for Seattle in the past, and the stakes this time could be significant.