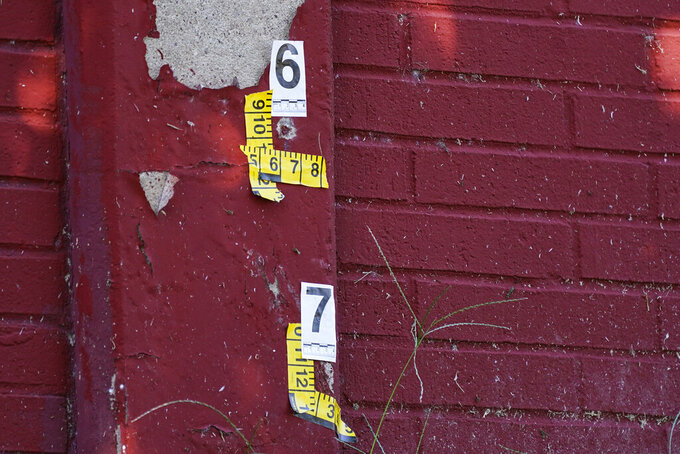 PHILADELPHIA (AP) — Police said Wednesday that they are searching for five shooters who ambushed a group of teens outside a Philadelphia high school killing one 14-year-old and wounding four other teenagers after a football scrimmage.

Nicholas Elizalde, of suburban Havertown, was killed in the ambush as he and the other teens walked away from an athletic field at Roxborough High School shortly after 4:30 p.m. Tuesday, authorities said. Philadelphia Police Captain Jason Smith said during a news conference Wednesday that police believe Elizalde was not the intended target of the shooters.

Smith said the shooters sat in a parked SUV for about six minutes waiting for the teens to round the corner behind the school. When they did, five shooters — who Smith said also appeared to be juveniles — got out of the car and began firing. One person remained in the car, Smith said.

“Most if not all of the offenders appear to be juveniles themselves. Nonetheless, they are obviously very dangerous individuals and the need is great to have them identified and taken off the streets as quickly as possible," Smith said.

One of the shooters chased a 17-year-old victim down the street, striking him in the leg and arm, Smith said. The shooter then stood over the teen and tried to empty his gun, but Smith said he had either run out of bullets or the gun had jammed.

Smith said police were looking into several possible motives, including a fight that occurred in the lunchroom earlier in the day Tuesday. Smith said the 17-year-old, who police say was one of two teens they believe to have been the shooters' targets, does not attend Roxborough High and is not on the football team with the other victims. Police had earlier said all the victims were members of the football team.

Police previously said they were examining social media and other sources to see whether the violence might have stemmed from events earlier in the day.

The shooting came just after Philadelphia surpassed 400 homicides for the year, only slightly behind the pace of last year's toll, which ended up being the highest in at least six decades. And it happened hours after Mayor Jim Kenney, a Democrat, signed an order banning guns and deadly weapons from the city’s indoor and outdoor recreation spaces, including parks, basketball courts and pools.

Kenney said Wednesday that shootings like the one Tuesday cause “irreparable harm” to schools, families and communities especially when they occur in places otherwise thought to be safe spaces.

“Yesterday's tragic events outside of Roxborough High School were just unconscionable,” he said. “Now a family is forced to grapple with the loss of a child ... after this heinous and cowardly crime.”

Alex Torres, whose 14-year-old brother was injured in the shooting, told WPVI-TV that his stepmother called to tell him about the shooting and that he rushed to the school.

“My little brother is 14, and just hearing he was shot is the worst feeling in the world,” Torres said, adding that his brother likes to play videogames and stays indoors a lot. “He’s a good kid, so I don’t understand why this happened to him.”

A spokesperson for the Philadelphia school district confirmed that Elizalde attended W.B. Saul High School, an agricultural charter school that partners with Roxborough for some of its athletics, including football.

Several players for the NFL's Philadelphia Eagles tweeted about the shooting Tuesday night, offering prayers for the families and lamenting that gun violence could shatter the safe space kids feel in sports.

“It must stop! for these kids, their families and their teammates,” Eagles right tackle Lane Johnson tweeted. “Sports are supposed to be a safe haven.”

The Eagles launched a campaign called “End Philly Gun Violence” in January that included a partnership with police to host a gun buyback at Lincoln Financial Field in June in exchange for gift cards funded by the Eagles organization.

27 minutes ago
an hour ago
By Will Graves 3 hrs ago
By Juan A. Lozano 3 hrs ago
By Arnie Stapleton 11 hrs ago