Pro Football Hall of Fame to reopen on Wednesday 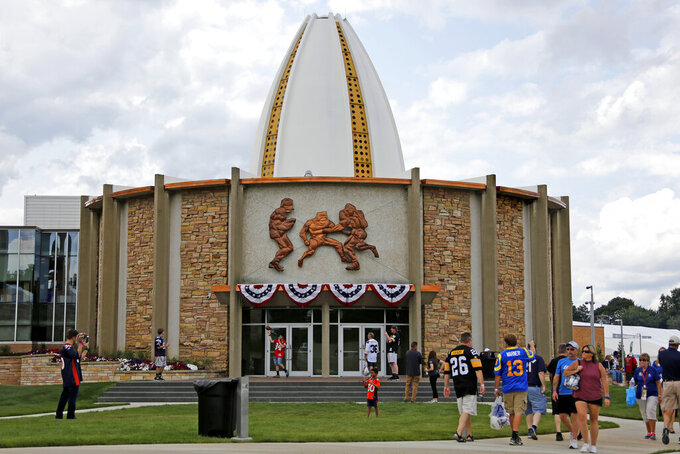 CANTON, Ohio (AP) — The Pro Football Hall of Fame will reopen Wednesday after nearly a three-month closure caused by the coronavirus pandemic.

The hall closed on March 16, but permission has been granted by Ohio Gov. Mike DeWine for museums, science centers and zoos to open.

“Since its grand opening in September 1963, the Pro Football Hall of Fame had never been closed more than two days in a row,” said David Baker, the hall's president and CEO. “So after nearly three months, you can imagine our excitement at being able to open our doors again to fans of this great game.

“We welcome them back and join them in honoring the heroes of the game, preserving its history, promoting its values and celebrating excellence everywhere.”

There will be several health and safety guidelines in place for visitors and workers at the shrine. All employees must wear face coverings and visitors are also encouraged to do so. The hall is making both masks and disposable gloves available. It also will hand out a stylus to anyone wanting one for the interactive displays.

Hand sanitizer stations have been placed throughout the Hall of Fame. Frequent cleansing and disinfecting procedures will be done each day.

One-way flow for fans will be in force, and the two main theaters within the hall will have limited capacities. However, the showings in those theaters are continuous.

There will be signs throughout the exhibits emphasizing social distancing. The museum's cafe will remain closed.

All hall employees and volunteers will receive a temperature reading with a no-contact scanning thermometer upon entering the building. Anyone with a temperature exceeding 100 degrees Fahrenheit (37.8 Celsius) will not be permitted to proceed.

“We stand ready to provide inspiration to fans eager to celebrate excellence,” Baker said. “And we will do so in a responsible manner that puts the safety of the visiting public and our dedicated staff at the forefront of each decision we have made in reaching this point and that we will continue to make moving forward.”

Crews have done thorough cleanings of all areas of the museum, which has a capacity of 3,200 in normal times. The capacity for Wednesday has been reduced to 800. It's undecided when that might be increased.

A decision about the planned induction ceremonies on Aug. 8, as well as the Hall of Fame game between the Dallas Cowboys and Pittsburgh Steelers, has not been made. The hall also has a special centennial class of inductees this year, some of whom will be enshrined in mid-September, so there is some flexibility.