Purcell's perseverance pays off with big payday in Denver 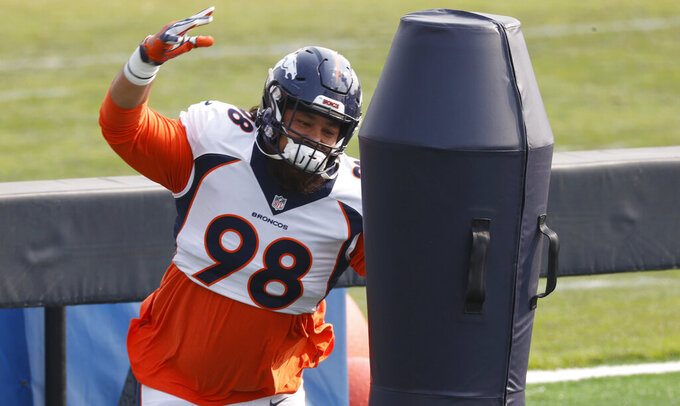 The 29-year-old journeyman nose tackle parlayed his surprising success in Denver last year into a big payday, signing a three-year, $14.8 million extension Tuesday with the Broncos, his eighth team.

“It’s amazing. It’s a complete blessing, that’s for sure,” Purcell said. “The journey has been up and down, and there have been multiple times when I’ve thought about hanging it up and saying, ‘Maybe it’s time to move on and start a real career.’ To be home, here with the Denver Broncos, my family and I are super excited.”

The 328-pound run stuffer grew up in Highlands Ranch not far from Broncos headquarters and attended the University of Wyoming. After getting overlooked in the 2013 NFL draft he signed with San Francisco, where Broncos coach Vic Fangio was then the defensive coordinator.

He spent four years bouncing between the 49ers’ practice squad and active roster before getting claimed off waivers by the Rams in 2017. He got cut coming out of training camp that year and would spend time on the practice squads of the Bears (where Fangio had gone to take over as Chicago’s defensive coordinator), Panthers, Patriots and Chiefs.

“It was a lot,” Purcell said. “My wife was pregnant with our daughter at the time. We traveled together to Chicago. We were there for about a month and we settled down into a place because we thought we might be there for a season. Two days later, I get a phone call in the morning saying, ‘Come in and turn in your iPad.’ From then, she stayed home, and I had to journey across the league.”

After getting cut by Kansas City -- for the 10th time overall -- in 2019, Purcell still wasn’t done with football and signed with Salt Lake City of the AAF.

When that spring league folded, Purcell signed with Denver, where Fangio had recently been hired as head coach.

Purcell was inactive for three of the Broncos’ first four games last year. After Jacksonville’s Leonard Fournette ran for 190 second-half yards against Denver in Week 4, Purcell was inserted into the lineup along with inside linebacker Alexander Johnson.

Since then, Denver has allowed the fewest rushing yards in the league, 101.4 yards per game, a 47.9-yard improvement from the team’s first four games of 2019.

Purcell's solid season meant a salary this season of $3.259 million as a second-round tendered restricted free agent. His $14.8 million extension takes him through 2023 and includes nearly $7 million in guarantees.

Purcell said he’s always thought about going into coaching or firefighting after football. But he knows getting into the fire academy isn’t easy, starting with having to shed some weight.

“That’s the plan when I’m done with football — slim up and maybe get back to the 200s on the scale one day,” Purcell said. “With some of the tests they go through as firefighters, and some of the holes you’ve got to be able to crawl through, it’s not easy. If you’re claustrophobic, it may not be the thing for you.

“Also, being as big as I am is one thing because you’ve got to be able to squeeze through some holes and knock down some walls. I’ve got faith that I can do that last part.”