Raiders' defense comes through big to remain in playoff race 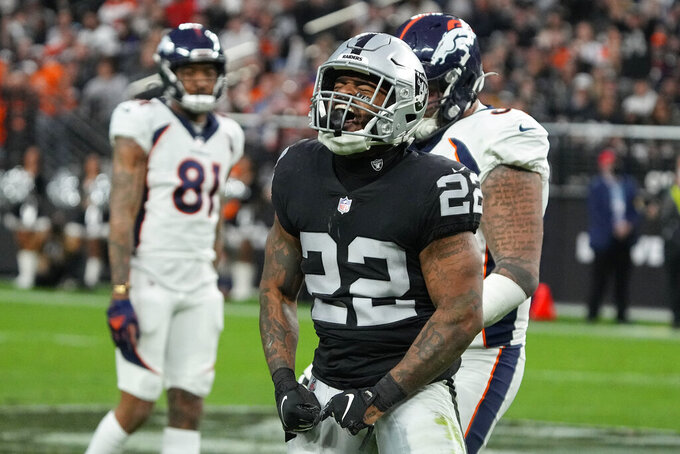 Las Vegas Raiders interim coach Rich Bisaccia was at a loss for words when it came to describing his team's dominant defensive effort.

It's safe to say that's not a problem many Raiders coaches in the past have had.

The Raiders used a different formula to remain in the AFC playoff race by combining a fierce defensive effort with an overpowering ground game to beat the Denver Broncos 17-13 on Sunday.

The Raiders (8-7) have allowed the most points in the NFL the past eight seasons and consistently been one of the worst defenses. But they have won back-to-back games when scoring 17 points or fewer for the first time since 1991.

The Raiders allowed a season-low 158 yards and just eight first downs — their second fewest in a game in the past 25 seasons — and limited the Broncos to three points following two fumbles that set up Denver in good field position.

Josh Jacobs and the running game did most of the rest with a season-high 160 yards on the ground, and the Raiders now can make the playoffs for the second time in the past 19 seasons by winning the final two games.

“They did a great job today,” quarterback Derek Carr said. “So proud of them. I told them in there, I would like to win a championship running the football and playing defense. Quarterbacks, we just try to make the best decision possible every time, trying to get it to the open guys, things like that. If we can play like that, then get hot doing that kind of stuff, that’s going to helps us. It doesn’t guarantee anything, but it’s definitely a good formula to winning.”

Run defense. After struggling to slow down running games for most of the season, the Raiders have fared very well at the line the past two games. They allowed only 18 yards rushing on Sunday, including just 8 yard on 14 carries by Javonte Williams and Melvin Gordon. That’s the fewest yards rushing allowed by the Raiders in a game since they gave up 13 to Buffalo on Dec. 21, 2014.

Takeaways. As well as the defense has played of late, generating takeaways has been a issue. Las Vegas hasn't had one in the past three games and has a league-low four in eight games since returning from its bye.

Jacobs. After a lackluster first half when he had 20 yards on 10 touches from scrimmage with a lost fumble, Jacobs finally delivered a game reminiscent of his impressive rookie season. He ran for 57 yards on a TD drive to open the second half that gave the Raiders the lead for good, his best performance on a drive since the second game of his career in 2019.

He had 18 carries for 104 yards in the second half to give him 129 yards on the game, matching his career high and giving him his first 100-yard game since Week 10 last year against Denver. Jacobs also had the first 100-yard rushing second half for the Raiders since Rashad Jennings had 113 against Houston in 2013.

Carr. While Carr carried the Raiders to most of their wins early this season, he has needed lots of help the last two weeks. Carr is the first Raiders player since Terrelle Pryor in 2013 to have three straight games in a season with at least two turnovers, and his 12 since the bye are the most in the NFL. Carr also has had one pass play gain more than 20 yards the past three weeks after being one of the top big-play QBs earlier in the season.

2-21 — The Raiders have won just two of 23 games the past 15 seasons when having a turnover margin of minus-3 or worse, and both have come against the Broncos. They won the 2020 season finale 32-31 with minus-4 differential, and then this last game at minus-3.

The Raiders visit Indianapolis on Sunday before closing against the Chargers.