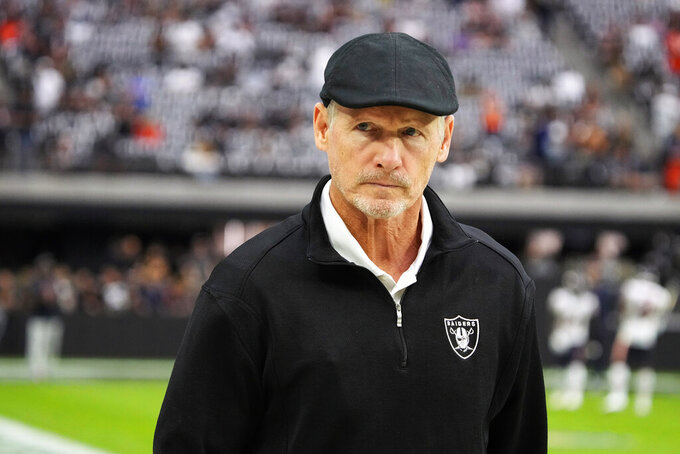 Owner Mark Davis made the first big decision of what figures to be an eventful offseason for the Las Vegas Raiders.

There will be plenty more to come as there figures to be significant change for an organization coming off just its second playoff berth in the past 19 seasons.

The players have advocated for Bisaccia to remain with the Raiders (10-8) after he led them to four straight wins to end the regular season to make the playoffs. Las Vegas lost 26-19 to Cincinnati on Saturday and hasn't won a playoff game since taking the 2002 AFC title game.

“I respect their thoughts and their feelings and the way in which they verbalize those things,” Bisaccia said. "I think continuity and consistency in any profession at times could be a good thing. But we all know what we’re skirting around. I’m in the position I’m in, and I’m sure Mark and I are going to have more conversations as the week goes on, as we did last night, and we’ll see how that thing works out.”

The Raiders rallied around Bisaccia following a tumultuous regular season that was marred by coach Jon Gruden resigning over the publication of his old offensive emails, and receiver Henry Ruggs III getting released after being charged with felonies in a fatal DUI crash that killed a 23-year-old woman.

The players praised Bisaccia for keeping the team together, leading to the strong finish to the regular season.

“The thing that hurts most about losing is the uncertainty,” running back Josh Jacobs said. “The locker room, you don’t know who’s going to be back, you don’t know what coaches gonna be back. So every day we kind of just try to cherish the moments with each other. With all the adversity that we’ve been through, we all definitely got tighter and closer.”

One of the big questions facing the Raiders this offseason will be what to do with quarterback Derek Carr. He has proven to be a solid but is entering the final year of his contract. Las Vegas must decide whether to reward Carr with a lucrative extension, let him play out the final year of the deal or go into rebuild mode and trade him for draft picks.

“When the time comes, I never want a face to face. I’m going to play quarterback, but my message will be talked about," Carr said. "I’m not going to go to dinner and say, ‘We have to do something.’ I’m not that guy. I’ll let my voice be heard, but in a different way.”

The Raiders' decision to overhaul their offensive line last offseason backfired. First-round pick Alex Leatherwood flopped at right tackle and still struggled after moving inside to guard. Brandon Parker was exposed at right tackle and John Simpson was overmatched at left guard. Center Andre James showed promising signs in his first season as a starter and left tackle Kolton Miller was stout.

But Las Vegas must decide what to do with Leatherwood and probably find at least one or two new starters to fortify the line.

The defense made strides in the first year under coordinator Gus Bradley as edge rushers Maxx Crosby and Yannick Ngakoue had strong seasons, middle linebacker Denzel Perryman bolstered the run defense, rookies Nate Hobbs and Trevon Moehrig upgraded the secondary, and Casey Hayward had a strong season at cornerback.

All those players other than Hayward are set to return in 2022, but the Raiders could use help at cornerback, strong safety and defensive tackle to become even stronger.

“I feel like we’re building something special here,” Ngakoue said. “It’ll be a great feeling to be able to keep certain key guys here.”

Davis will interview coach and general manager candidates and decide on what duo will lead the franchise into the future.