Raiders ramping up for season with new leadership in place 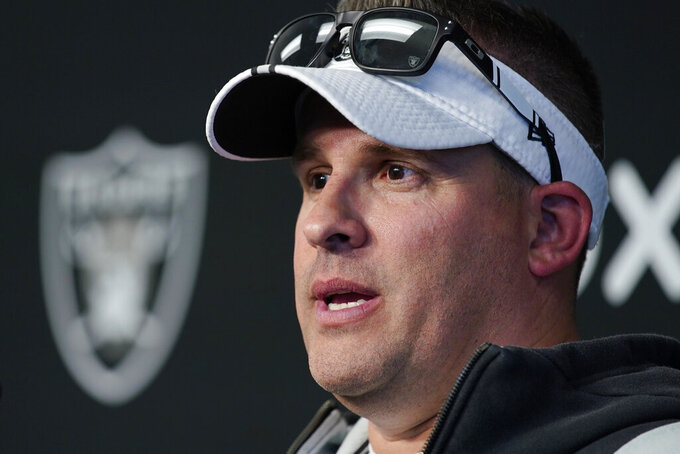 HENDERSON, Nev. (AP) — Las Vegas Raiders owner Mark Davis, new President Sandra Douglass Morgan and star tight end Darren Waller all attended a WNBA game between the hometown Aces and the Atlanta Dream and they were all about the energy.

As electric as the arena was, though, the trio couldn't help but talk about the energy flowing roughly 10 miles away at the Raiders' facility.

“We’re undefeated right now and hopefully we’ll keep it that way,” Davis said. “This offseason has been a real building moment for us.”

The Raiders, who open their preseason slate on Aug. 4 in the Hall of Fame Game against the Jacksonville Jaguars, have all new leadership, something Davis said he’s elated about.

“We’re just really thrilled to have the three of them at the top of the food chain,” Davis said Tuesday night, a day before veterans reported for camp.

The addition of wide receiver Davante Adams gives Derek Carr the big-time target he’s longed for while completing a receiving trifecta for the ninth-year quarterback, along with Waller and Hunter Renfrow.

Waller, who was Carr’s leading receiver in 2019 and 2020, said he is looking forward to being in a McDaniels-led system that could contain hints of the style he used in New England, where the Patriots generally relied on a tight end to complement the passing game.

“It’s gonna put pressure on people," Waller said. "We have the talent to dictate what goes on out there and we feel excited about the scheme that’s in place."

For Morgan, the first Black woman to assume the role of president of an NFL team, the wow factor has been watching every component of the Raiders organization work in unison leading up to camp.

“It is just an amazing machine that is smooth and operating and we just can’t wait for the season to kick off,” Morgan said. “People are excited and ready for the season. You see the tents kind of going up on the field and we’re all just excited and really ready to go and support the team however we can.”

During a media availability Wednesday, edge rusher Maxx Crosby said he still has nerves on the eve of training camp.

”(I’m) just trying to get my mind in a different place because once you start training camp, you’ve got to be in a different place mentally,” said Crosby, who was named to his first Pro Bowl after registering eight sacks last season. “It’s here now, so it’s super exciting. Every single year, it’s always a new challenge, new goals, new things going on. But it’s football, so there’s nothing more I’d rather be doing on Earth.”

For Davis, it’s another season with another new staff and the same expectations he always has. But as confident as he may be, he knows better than to pat himself on the back over any moves he’s made

“I’ve been through this too many times at the beginning of the season,” Davis said. “We have a lot of promise. But you gotta go out and do it. And then when you go out and start earning those things, then you start saying ‘yeah we got it right.'"