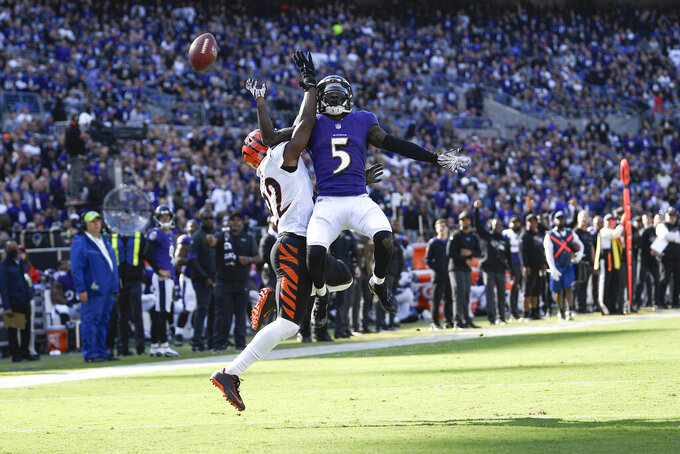 BALTIMORE (AP) — Humiliated at home by a team they usually dominate, the Baltimore Ravens lamented their untimely penalties, missed tackles and shoddy pass coverage in a 41-17 blowout loss to the Cincinnati Bengals.

Seeking their sixth straight victory and a two-game lead in the AFC North, the Ravens (5-2) came up with one of their worst performances in years. Baltimore coach John Harbaugh and the Ravens dutifully gave credit to Bengals quarterback Joe Burrow and standout rookie receiver Ja'Marr Chase, but mostly the players cited their own poor play Sunday as the reason for the lopsided defeat.

“They played a good game of football,” Ravens defensive tackle Calais Campbell said. “We feel like we’re a good team, too, but today we didn’t play as we’re capable of playing. We’ve got to be more consistent.”

The Bengals (5-2) are supposed to be an up-and-coming young team, but on this day Baltimore looked like a club seeking stability. The Ravens were called for five penalties (compared to just one for Cincinnati), allowed five sacks and had enough missed tackles to keep the coaches busy watching film all the way through the upcoming bye week.

Two-time Pro Bowl cornerback Marlon Humphrey was assigned the task of providing the brunt of coverage on Chase, who ended up with eight catches for 201 yards and an 82-yard touchdown. Humphrey spent most of the afternoon chasing down the fleet rookie or taking a stab at tackling him — with little success.

Oh, Humphrey was not alone. Distributing the ball to Chase, his tight ends and whomever else found a crease in the Baltimore backfield, Burrow went 23 for 38 for a career-high 416 yards and three touchdowns,

“We do have to play better in the secondary, for sure,” Humphrey said. “Going into this week, the (Ravens coaches) were counting on me to stop their top guy, and I lost that matchup. A lot of it is kind of on me. I’ve got to play better.”

Ravens coach John Harbaugh said: “We wanted to do better against (Chase). Obviously, our plans did not work, and he made it look easy today as well.”

Then there were the missed tackles, which have become commonplace for Baltimore. It's a trend that must stop if the Ravens expect to contend for the AFC title.

“I know that’s been a a big thing for us,” Humphrey acknowledged. “We’ve got to do better at the basic fundamentals.”

One of the most surprising aspects of this defeat was the Ravens were coming off a 34-6 rout of the Los Angeles Chargers, who came to town as one of the most highly regarded teams in the AFC. The difference between that Baltimore team and the one that was picked clean by Burrow was stunning.

“Hey, like I’ve said many times, that’s how the National Football League works," Harbaugh said. "It’s always week to week; it’s always game to game. There never is any running narrative. It just doesn’t exist. You have to come out and play your best every week, and we did not play our best – far from it, really, in any phase. That’s on us. That’s it. That’s what happened.”

Baltimore had become accustomed to breezing by the Bengals, winning five straight over the perennial division doormat — including 27-3 and 38-3 last year.

Welcome to a new AFC North, where Cincinnati now owns a share of the division lead after beating both Baltimore and Pittsburgh on the road.

The Ravens have two weeks to regroup before facing Minnesota on Nov. 7. Learning from this defeat is a must, but wallowing in the aftershock will not be beneficial.

“It’s nothing we can’t fix,” Campbell said. “We can’t let this game beat us twice. It’s one game. It hurts, it’s going to burn, but we’ve got a whole lot of games left to play.”