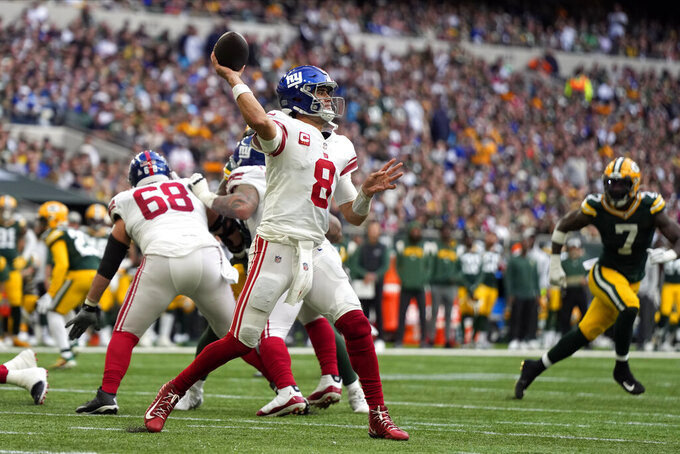 New York Giants quarterback Daniel Jones (8) throws a pass during the second half of an NFL football game against the Green Bay Packers at the Tottenham Hotspur stadium in London, Sunday, Oct. 9, 2022. (AP Photo/Alastair Grant)

TURNOVER DIFFERENTIAL: Ravens plus-5; Giants plus-1.

RAVENS PLAYER TO WATCH: S Geno Stone. With Marcus Williams out because of a dislocated wrist, Stone will have to step up in the secondary. Stone played sparingly on defense until last weekend, when he was in for more than half the snaps.

GIANTS PLAYER TO WATCH: RB Saquon Barkley. He's been the Giants best player. His 533 yards rushing are second in the league to the Cleveland Browns' Nick Chubb (593) and his 676 yards from scrimmage are tops in the NFL.

KEY MATCHUP: The Giants secondary against Baltimore TE Mark Andrews. He has eight 100-yard receiving games, one shy of Mark Clayton’s franchise record. He also needs five catches to reach 300 for his career. Don't be surprised if S Xavier McKinney is around him a lot.

SERIES NOTES: This will be only the eighth meeting between the teams, with one game deciding an NFL title. The Ravens beat the Giants 34-7 in the Super Bowl on Jan. 28, 2001 for the franchise's first championship. ... The previous time the teams played was in the pandemic season and there were no fans allowed. ... Baltimore has won two of the past three.

STATS AND STUFF: The Ravens are seeking their third straight road win. ... This will be their second game at MetLife Stadium in 2022. They opened the season with a win over the Jets. ... Justin Tucker, whose 43-yard kick won the game against Cincinnati with no time left, has made 61 consecutive field-goal attempts in the fourth quarter and overtime. He is 17 of 17 in the final minute in regulation in his career. ... Ravens QB Lamar Jackson is 12-0 as a starter against NFC teams. … Baltimore’s offense has gone three-and-out six times in 55 drives. … Baltimore has outscored opponents 34-3 in the first quarter, but has been outscored 50-15 in the fourth. ... Jackson's 374 yards rushing are tops among NFL QBs. ... WR Devin Duvernay has a TD catch in each of his first two road games. ... CB Marcus Peters has interceptions in two straight road games. ... CB Marlon Humphrey has interceptions in two of his past three games. ... The Ravens have eight interceptions. ... Former Giants LB Jason Pierre-Paul had his first sack of the season last weekend. He has 92 1/2 in his career. ... A victory would give the Giants more wins than last season. ... New York's previous 5-1 start was in 2009. ... QB Daniel Jones has had no interceptions in five of his past six home starts. ... RB Gary Brightwell and TE Daniel Bellinger each ran for a TD against the Packers. ... DL Dexter Lawrence has three sacks in the past two games. ... Rookie LB Kayvon Thibodeaux had two passes defended against Green Bay. ... LB Oshane Ximines had sack and his first career forced fumble last weekend. ... The Giants have not intercepted a pass this season.

FANTASY TIP: Giants WR Darius Slayton had a breakout game in London, catching six passes for 79 yards. With most of the key wide receivers injured, this will be a chance for him to put up big numbers against the NFL's worst pass defense.