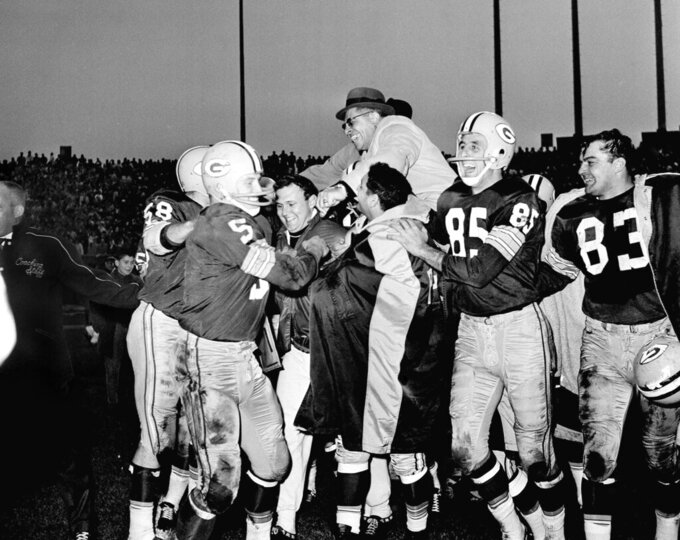 FILE - The Green Bay Packers football team carry coach Vince Lombardi after clinching the NFL West Conference title by beating the New York Giants 20-17 in Milwaukee, Wisc., in this Dec. 3, 1961, file photo. At left is mPaul Hornung (5) and at right is Max McGee (85). The rest of the players are unidentified. The Baltimore Ravens are one victory away from passing Vince Lombardi's Green Bay Packers for the longest preseason winning streak in NFL history. Beating Washington on Saturday would make it 20 in a row. The Packers won 19 in a row from 1959-1962. (AP Photo/DVN)

John Harbaugh cared enough about his Baltimore Ravens tying the mark for the most consecutive preseason victories that he told players about it in the locker room after their 19th in a row.

“I believe everything in life has meaning,” Harbaugh said. ”It’s something only one other team has done.”

That team was Vince Lombardi's Green Bay Packers, who won two NFL championships and reached another title game while their streak was ongoing from 1959-62. The Ravens beating Washington on Saturday would put them past the Packers for something that's not even an official record because the games don't count.

Real or not, Baltimore players would like to extend their streak.

“Don’t jinx it. Keep it going," quarterback Lamar Jackson told reporters at training camp this week. "It’s a competitive team, so we always want to win: preseason, regular season — whatever.”

Well before Jackson entered the league in 2018, the Ravens had not lost a preseason game. The last was in 2015. Their streak began in 2016 when the dynamic duo of Ryan Mallett and Josh Johnson outdueled Cam Newton and the Carolina Panthers.

Carolina's coach that game? Washington's Ron Rivera, who when asked about the Ravens streak alluded to his signature catchphrase of focusing on what's important and not what's interesting.

Reigning Defensive Rookie of the Year Chase Young only heard about Baltimore's preseason run this week and said, "All I know is we’re going to go out there and play hard with the opportunity that we get and we’ll see what happens.”

The legendary coach's Packers started their streak by beating Washington 20-13 in front of 15,000 fans in Winston-Salem, North Carolina, on Sept. 12, 1959. It technically ended with a loss to a team of college all-stars in 1963 — but their next exhibition defeat to an NFL rival didn't come until 1964.

“Lombardi was a guy when he got there that was turning around, I don’t want to call them a hapless team, but they were struggling,” NFL historian and author Joe Horrigan said. “I think he sensed that there wasn’t a winning attitude, and that’s what preseason kind of became to him with the Packers and Packers players — that was to instill a winning tradition and a winning feeling."

Harbaugh said Lombardi's Packers holding the current mark made it more notable. If two meetings with the college all-stars — one win and one loss — are thrown out, Green Bay's streak actually lasted 23 preseason games against NFL opponents and would mean Baltimore would need to go undefeated through 2022 just to tie it.

“It wasn’t a game they took lightly,” he said. “The seriousness with which they played was still there.”

The results don't count in the standings again until they open the regular season at Las Vegas on Sept. 13, but the Ravens are taking it seriously by finding motivation in exhibition success and hoping it carries over. Linebacker Tyus Bowser summed it up with a saying from defensive coordinator Don (Wink) Martindale about tallying up points just the same.

“Like ‘Wink’ said, ’If there’s a scoreboard out there, we’re trying to win,' Bowser said. ”It’s as simple as that. That’s just the vibe, and that’s the type of mindset we have as a team."