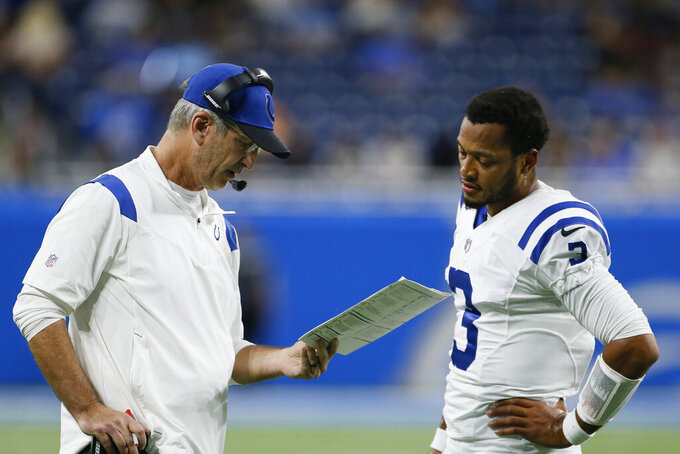 INDIANAPOLIS (AP) — Indianapolis coach Frank Reich has been on the vaccination team since before training camp opened.

He's tried to educate, cajole and convince more players to join him. At last count, Reich said inoculations were leveling off with about 75 percent of Indy's roster having taken the jab.

“I’ve had a lot of conversations and I think it’s fair to say, at times, I get frustrated," Reich said. “I do try to listen and respect but I also don’t shy away from saying what I believe and what I believe is right — the research that I’ve done. I don’t hesitate in saying what I think is best for the team, but we’ll continue to reiterate this is an individual decision. We respect that."

It's suddenly become a delicate topic again in Indy.

While some, such as All-Pro defensive tackle DeForest Buckner and running back Jonathan Taylor, quickly acknowledged they were vaccinated when camp opened in late July, others, such as Wentz, said they wanted to keep their decisions private.

But the league's COVID-19 protocols have thrust the debate into the public realm.

Wentz, Kelly and Pascal did not test positive for the virus yet were deemed close contacts. The interpretation is they were unvaccinated. And Wentz, who three weeks with a left foot injury, wore a mask as he watched the other three quarterbacks work out at practice.

Reich even defended Wentz when asked whether his decision to possibly jeopardize his game-day availability with more trips to the COVID-19 list was a failure in leadership.

“Carson in many ways is an exemplary leader," Reich said. “Are any of us the perfect leader? I don’t know, I don’t think so. We all have holes in our game somewhere and we’re all trying to get better and we’re all trying to learn. I’m trying to learn as a leader. This is year four as a head coach, I feel like I’m just scratching the surface of what it means to be a leader and I can get a lot better. I hope all of our players feel like that."

Buckner and second-year receiver Michael Pittman Jr., both vaccinated, did not criticize their absent teammates and Buckner noted some fully vaccinated people still test positive as the Colts have seen.

Reich missed the first week of training camp and defensive coordinator Matt Eberflus the first two preseason games because of positive tests. Both were fully vaccinated.

Nelson, a three-time All-Pro at left guard, was activated Monday after being deemed a close contact with Fisher, the two-time Pro Bowler, who is still recuperating from a torn Achilles tendon. Davenport is expected to be the left tackle until Fisher returns.

Pittman Jr., who is expected to play a bigger role with T.Y. Hilton out because of an injured disk in his neck, made his decision for another reason.

The potential of absent players isn't the only issue.

After Friday's preseason finale at Detroit, Reich acknowledged vaccination status could play a role in roster cuts and how the Colts stacked their 53-man active roster.

But Reich doesn't want COVID-19 splitting up the locker room so, for now, he will continue to rely on the power of persuasion.

“Sometimes it seems like the obvious answer is to come in with the hammer and the problem with the hammer is that there’s a lot of collateral damage that you don’t see until later."

NOTE: Indy acquired offensive lineman Matt Pryor in a trade with Philadelphia. The Colts sent a sixth-round pick to the Eagles got a seventh-rounder back for the third-year player. The move comes one day after Sam Tevi went on season-ending injured reserve with a torn ACL in his right knee.