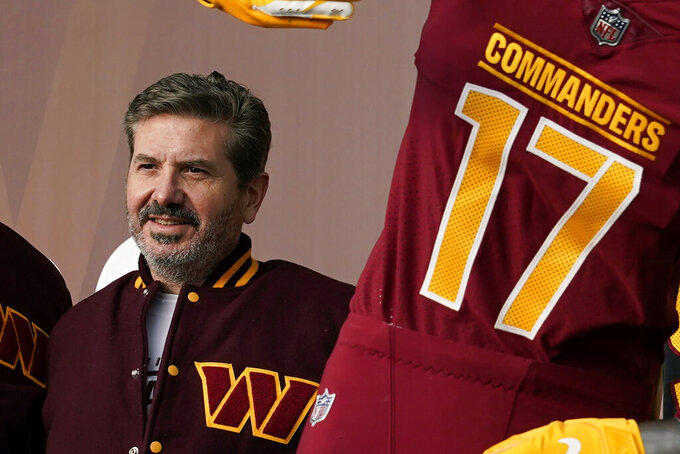 FILE - Dan Snyder, co-owner and co-CEO of the Washington Commanders, poses for photos during an event to unveil the NFL football team's new identity, Wednesday, Feb. 2, 2022, in Landover, Md. A woman accused Washington Commanders owner Dan Snyder of sexually harassing and assaulting her on a team plane in 2009, and the woman was later paid $1.6 million by the team to settle her claims, according to a document obtained by the Washington Post, Tuesday, June 21, 2022. (AP Photo/Patrick Semansky, File)

WASHINGTON (AP) — A woman accused Washington Commanders owner Dan Snyder of sexually harassing and assaulting her on a team plane in 2009, and the woman was later paid $1.6 million by the team to settle her claims, according to a document obtained by the Washington Post.

The Post reported Tuesday that it had obtained a letter by an attorney working for the team that detailed the woman's allegations while arguing that her claims were not credible. The $1.6 million settlement had been previously revealed in legal filings related to more recent investigations of the team, but details of the woman's allegations were not disclosed. The woman agreed not to sue the team or publicly disclose her allegations as part of the settlement.

Snyder denied the woman's allegations, according to the letter, and a team investigation accused her of making up the claims in an attempt to extort him.

The contents of the letter were disclosed a day before a scheduled hearing by the House Committee on Oversight and Reform, which is investigating the Washington team's workplace culture. Snyder has declined an invitation by the committee to testify, and NFL Commissioner Roger Goodell was scheduled to testify remotely.

The NFL fined the team $10 million and Snyder stepped away from its day-to-day operations after an investigation by attorney Beth Wilkinson revealed a workplace culture that was abusive to women. But the league declined to release a written report of Wilkinson's findings.

The committee has since uncovered an allegation of sexual harassment by Snyder. Former team employee Tiffani Johnston told the committee that Snyder groped her at a team dinner and tried to force her into his limousine, claims that Snyder denied.

That triggered a new investigation of the team ordered by the NFL and led by Mary Jo White, a former U.S. attorney and chairwoman of the Securities and Exchange Commission. White is also looking into claims of financial improprieties by a former vice president of sales for the team. The NFL has said White's findings will be made public.

The letter obtained by the Post was written by Howard Shapiro, an attorney at WilmerHale law firm, which had helped the team investigate the woman's allegations. Shapiro wrote that the woman's claims were “knowingly false.” He declined to comment to the Post.

According to the letter, the woman accused Snyder of asking her for sex, groping her and trying to take off her clothes in a private, partitioned area at the back of a team plane during a return flight from a trip to Las Vegas.

The letter stated that none of the other passengers on the flight supported the woman's account. Others said the door to the back area of the plane was open for most of the flight and that other passengers and flight attendants were frequently present in that section, according to the letter.