Russell Wilson says he didn't request a trade from Seahawks 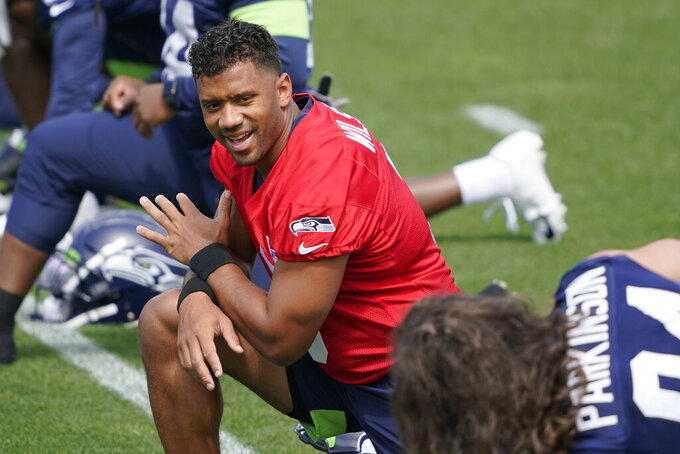 RENTON, Wash. (AP) — Seattle Seahawks quarterback Russell Wilson made it clear Thursday that he did not ask for a trade this offseason, and insisted his relationship with coach Pete Carroll and general manager John Schneider has been strengthened through a series of conversations after months of uncertainty.

Wilson spoke for the first time since February, when a series of comments he made led to trade speculation and a growing furor surrounding his future in Seattle.

Wilson repeated numerous times that winning is the ultimate cure for any dissatisfaction and that any rifts with the franchise have been mended for now.

But clearly frustration had been building over the team's performance and that led to the offseason firestorm that started after Wilson watched Tom Brady win another Super Bowl title in February.

“When I’m sitting at the Super Bowl and watching the Super Bowl, I should be (angry), right?” Wilson said. “At the end of the day you shouldn’t be wanting to sit there and watch the game. You want to be there and play, especially when you’ve played in it twice.”

Seattle won its only Super Bowl title eight years ago and it's been seven years since the Seahawks last won the NFC. The Seahawks haven’t advanced past the divisional round of the playoffs in any season since, and last year they were ousted in the wild-card round at home by division rival Los Angeles — the first home playoff loss of Wilson’s career.

Wilson’s previous comments came after questions about whether the Seahawks were doing enough to put a winning product around him. He specifically mentioned his offensive line and being tired of constantly getting hit.

The conjecture reached a boil when Wilson’s agent, Mark Rodgers, commented to ESPN that Wilson had not requested a trade but listed the four teams — Las Vegas, Dallas, Chicago and New Orleans — for which he would be willing to waive his no-trade clause.

“There was a whole thing saying that I requested a trade and that’s just not true. I didn’t request a trade, so I think everything kind of started from there,” Wilson said. “And then, obviously, tons of teams were calling, and I think that the reality was that I didn’t really want to go anywhere else. I wanted to play in Seattle. But if I had to go somewhere these are the teams I would go to, or consider.”

The comment by Wilson's agent was the final public declaration about the situation for nearly two months, which only allowed the uncertainty to fester. Carroll and Schneider finally spoke before the draft in April and tried to quash any lingering doubt about the relationship, saying the silence was by design.

Wilson said it was during those times that he was talking with the Seahawks' bosses.

“Sometimes things are family matters, and not everybody else is a part of it at the time,” Wilson said. “Because the reality is there was calls going around that I could have possibly been traded. I think the reality is that we had to have a lot of conversations, we had some great ones along the way, and it made our relationship stronger.”

While the relationship may be stronger — according to Wilson — Seattle could be in the same place a year from now with uncertainty surrounding its quarterback. Wilson's current contract runs through 2023, but it has salary cap hits of $37 million and $40 million the next two seasons.

The uncertainty clearly caught the attention of teammates. Bobby Wagner, drafted one round earlier than Wilson in 2012, said it was impossible to ignore.

“Every time it was on TV it was right there in your face,” Wagner said.

But, he added, there were plenty of conversations with Wilson to figure out what was fact and what was speculation.

“When you don’t go all the way and you don’t win, they start to build different stories,” Wagner said. “I mean I’m sitting here and I talk to Russell every day so I knew what was true, what wasn’t true. I wasn’t too concerned about it."