Saints' Allen foreshadows continuity, but with his own spin 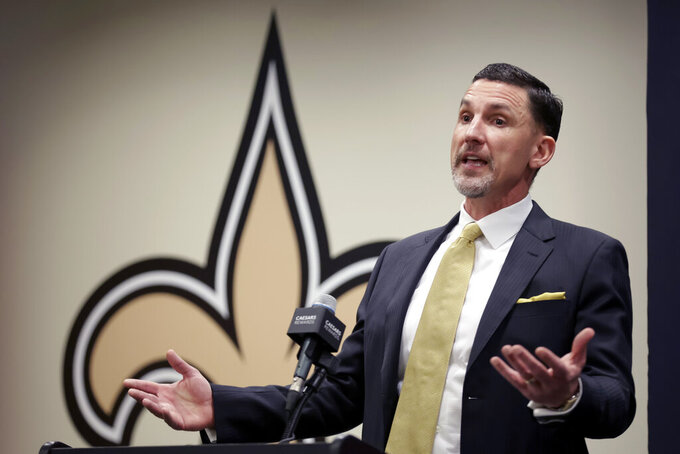 Allen's first head coaching job with the Oakland Raiders nearly a decade ago taught him he has more pressing matters to attend to than how he measures up to Sean Payton, who stepped down two weeks ago as the Saints' all-time leader in victories, not to mention the only Super Bowl winning coach in the club's 55 seasons.

“Look, I understand what the expectations are here,” Allen, a longtime Payton assistant, said at his introductory press conference Tuesday.

"I look at it as: What a great example to follow,” Allen added. “I know we have great foundation in place and I’m grateful for that.

“It’s the perfect fit because I know the people here," he said. "I know the administration. I know the players. I know the support staff. I understand all the culture here in this building.”

When Allen became the Raiders' head coach, the franchise had a first-year general manager and an owner in Mark Davis who was in his first year succeeding his late Hall of Fame father, Al Davis. The team was rebuilding, experience was in short supply and losses mounted quickly before Allen was fired four games into his third season.

“It was a totally different set of circumstances," Allen, 49, recalled. "I was a 39-year-old head coach at that time.

Allen was part of Payton's first staff in 2006 as a defensive assistant. His first stint lasted until 2010, a period that included a Super Bowl title in the 2009 season. Allen left New Orleans in 2011 to become Denver's defensive coordinator before taking the Raiders job one season later.

He was back with the Saints in 2015 as a senior assistant and was named defensive coordinator later that season when Payton fired Rob Ryan.

For the past two seasons, Allen's defenses have ranked in the top seven in the NFL. The Saints didn't want to lose him, so he was always going to be a favorite to fill the head coaching opening with the team he helped win four straight NFC South titles from 2017 to 2020.

“This was not a broken job," Allen asserted. "There's a foundation and culture of winning that’s already been built.

“I want to try to continue this winning tradition,” Allen added. "I don’t see this as something where we need to have a ton of change.”

At the same time, Allen spoke of the importance of being himself and putting his “own spin” on things.

"I’m looking more at it as: I want to take lessons I’ve learned, I want to build on those lessons and create my own legacy here,” Allen said.

“We interviewed him for six hours last week, but the truth is we’ve been interviewing him for 12 of the last 16 years,” Loomis added.

Allen declined to get into specifics about his vision for the club's unsettled quarterback position.

“We want a winner. Just a winner -- a guy that’s got a tireless work ethic,” Allen said. “That’s certainly something that we’ve got to figure out.”

Allen also shared little of his plans for the coaching staff, but foreshadowed keeping a good portion of it.

“We've got a talented staff and I like a lot of things we’ve done,” Allen said.

Allen added that he expected to be heavily involved in personnel decisions, as well as game-planning on the defensive side, and possibly even calling defensive plays during games as he has the past half-decade.

“It’s hard to turn your baby over," Allen said.

The Saints went 9-8 this past season and only narrowly missed the playoffs, despite a slew of injuries, including to season-opening starting quarterback Jameis Winston.

The club's defense often carried the team, particularly during a 9-0 victory at Tampa Bay. The bigger challenges next season could be on offense — and not just at quarterback. Uncertainty now swirls around the Saints' top star, running back Alvin Kamara, following his arrest in Las Vegas on felony charges stemming from a night club fight.

Kamara could be in for protracted legal concerns and a suspension. But Allen said it was premature for him to address that matter in any detail.

"We’ve got to gather all the information before we have any sort of comment on that,” Allen said.