Saints move practice to home of Cowboys after Ida evacuation 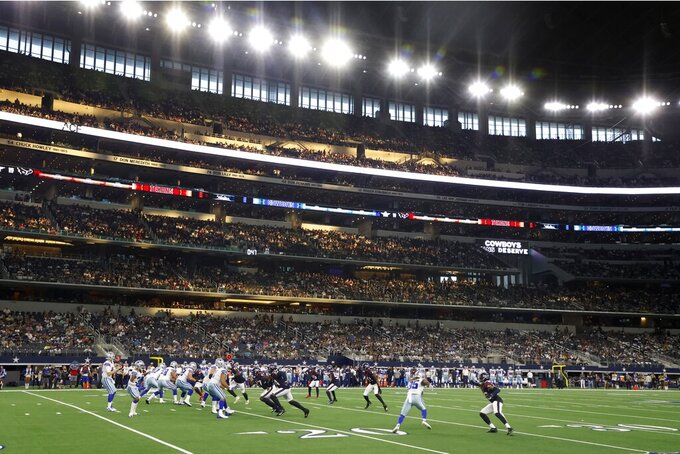 The Houston Texans play the Dallas Cowboys in the first half of a preseason NFL football game at AT&T Stadium in Arlington, Texas, Saturday, Aug. 21, 2021. (AP Photo/Michael Ainsworth)

The New Orleans Saints are planning to practice at the home of the Dallas Cowboys for three days this week after evacuating because of Hurricane Ida, a person with knowledge of the decision told The Associated Press on Sunday.

The team is scheduled to hold workouts Monday, Tuesday and Wednesday at AT&T Stadium before taking a break heading into the regular season, according to the person who spoke to the AP on condition of anonymity because the club wasn't discussing its plans publicly. The Saints are supposed to open at home Sept. 12 against Green Bay.

Ida made landfall south of New Orleans on Sunday as a powerful Category 4 hurricane with winds of 150 mph (230 kph), one of the most powerful storms ever to strike the U.S.

The arrival of Ida came 16 years to the day after Katrina devastated New Orleans. The Saints were forced to move for the entire 2005 season, setting up operations in San Antonio while playing home games there and in Baton Rouge at LSU. New Orleans also played one game at Giants Stadium.

That was before the current regime led by coach Sean Payton joined the franchise. The Saints went 3-13 in 2005, but spurred on by the quick restoration of the Louisiana Superdome, they went 10-6 and won the NFC South the next year.

NFL Commissioner Paul Tagliabue led the move to ensure that the Saints would return to New Orleans, meeting strong resistance from the late Tom Benson, who owned the team and sought to move it permanently to San Antonio. Tagliabue was so insistent on the club remaining in New Orleans that the league ordered a banner posted outside the stadium saying the Saints would play a home game on Sept. 26, 2006.