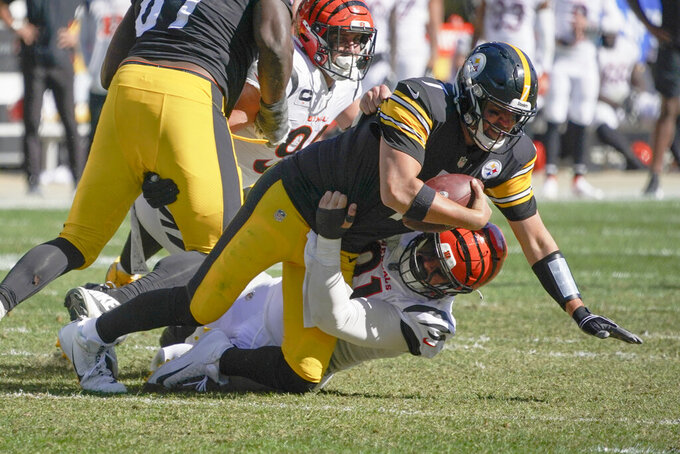 PITTSBURGH (AP) — Ben Roethlisberger chose to come back for his 18th season, believing the Pittsburgh Steelers still had the ability to contend for a Super Bowl even without so many of the faces that protected him so capably for so long.

The 39-year-old insists he doesn't have buyer's remorse, though the optimism that came easily during training camp is fading. The hits he's absorbing are starting to pile up.

The losses too, the latest a baffling 24-10 setback against Cincinnati on Sunday in which the Steelers (1-2) hardly looked like a group close to figuring it out.

Not with an offense that draws penalties with alarming frequency and an injury-marred defense missing two of its top pass rushers.

No wonder coach Mike Tomlin made it a point to spread the blame around in the aftermath.

"There’s enough to go around and we take responsibility for that," Tomlin said. “That’s what you do when you play losing football. And that’s what we did today.”

Something that rarely used to happen at Heinz Field and almost never when Cincinnati was on the other line of scrimmage. The Steelers had won 14 of 16 against the Bengals and hadn't fallen to Cincinnati at home since 2015.

Yet they never led on an afternoon in which the Bengals looked younger and more dynamic offensively and more rugged and imposing defensively.

Roethlisberger's numbers weren't terrible. He completed 38 of 57 passes for 318 yards with a touchdown and two interceptions. Yet most of the yards and completions came with Pittsburgh desperately and futilely giving chase. He took four sacks, including two in which the protection was fine but he held on to the ball for far too long, allowing the Cincinnati pass rush to close in.

“There were coverage sacks today,” Roethlisberger said. “When you drop back and throw it 50-some times like we did today, those are going to happen. I thought the guys put up a good effort.”

Tomlin called the mistakes “drive killers.” They may prove far more lethal than that. Pittsburgh finds itself heading to October in last place in the AFC North. And that's after a pair of home games against two non-playoff teams from a year ago.

While rookie running back Najee Harris showcased again why the Steelers grabbed him in the first round — he had 28 touches for 142 yards — he also had a handful of drops and was also occasionally undone by some curious play-calling.

Pittsburgh trailed by 14 late in the fourth quarter when the Steelers faced fourth-and-10 at the Cincinnati 11. Roethlisberger flipped a quick pass to Harris in the flat. The play design called for Harris to receive some downfield blocking. There was none to be had. Instead, Harris found himself swallowed up by three Bengals for a short loss.

Tomlin declined to single out first-year offensive coordinator Matt Canada and Roethlisberger admitted in hindsight maybe he should have taken a shot at the end zone.

Following the loss to the Raiders, Roethlisberger fell on his sword, saying he needed to play better even on a day where he appeared to be the least of his team's problems. It's something he's done frequently during his long career, though when he did it again on Sunday, it felt a little more true.

Yes, there were drops. Yes, there were blown protections. There were also times when he held onto the ball far too long, threw over or behind receivers who'd created a bit of separation and made poor decisions, including a momentum-shifting interception in the third quarter when he forced a short pass into triple coverage that was picked off by Cincinnati linebacker Logan Wilson.

The Bengals converted the miscue into Joe Burrow's third touchdown pass of the day and a 17-point lead that felt far larger.

It's far too early for that. Then again, the Steelers head to October off to their worst start since opening 0-4 in 2013. They eventually got it together that season to finish 8-8. But the franchise was in a far different spot then. The offense was ascendant back then. Now it's a disjointed mess. And time is running out.