Smith out, Heinicke starts for Washington vs. Tampa Bay 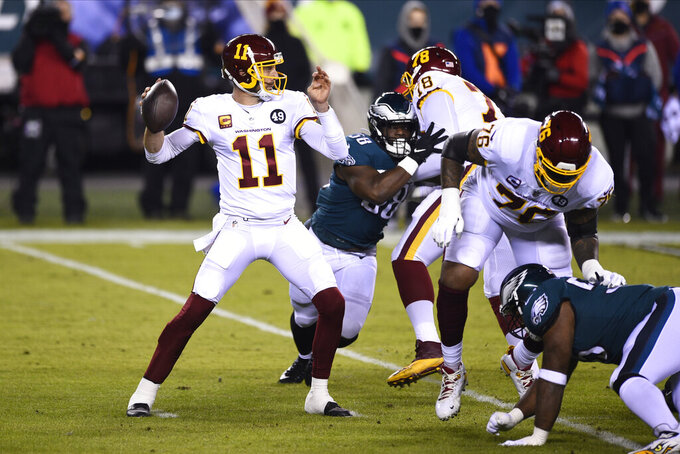 Washington Football Team's Alex Smith plays during the first half of an NFL football game against the Philadelphia Eagles, Sunday, Jan. 3, 2021, in Philadelphia. Alex Smith is the biggest reason Washington became the first team in the Super Bowl era to start 2-7 and make the playoffs. The 36-year-old’s journey back from a broken leg and 17 surgeries was a long one, but the difference with him at quarterback has been simple: Smith doesn’t make major mistakes, manages the game and is the cool hand coach Ron Rivera wanted in control of his young team. (AP Photo/Derik Hamilton, File)

LANDOVER, Md. (AP) — Alex Smith is not in uniform for Washington’s wild-card game against Tampa Bay, with Taylor Heinicke starting at quarterback on Saturday night against Tom Brady and the Buccaneers.

Smith was listed as questionable, and his strained right calf didn’t respond to treatment enough for him to even take part in the QB rotation with Heinicke that coach Ron Rivera was contemplating. The 36-year-old Smith had significantly reduced mobility last weekend in a victory at Philadelphia because of the injury that caused him to miss the previous two games.

Heinicke is making his playoff debut just over a month since Washington signed him to the practice squad. He has just one regular-season start and seven games of experience on his resume.

Running back LeSean McCoy is out with an illness, and defensive lineman Jeremiah Ledbetter is inactive with a calf injury.

Washington doesn't have any of the three quarterbacks it started the season with: Smith is inactive, Kyle Allen was placed on injured reserve after underdoing ankle surgery, and 2019 first-round pick Dwayne Haskins was released after a loss to Carolina in Week 16.

Rookie running back Antonio Gibson and second-year receiver Terry McLaurin are active for Washington after being considered questionable. Linebacker Thomas Davis is out for a second consecutive week.